A bug’s life (and/or death) 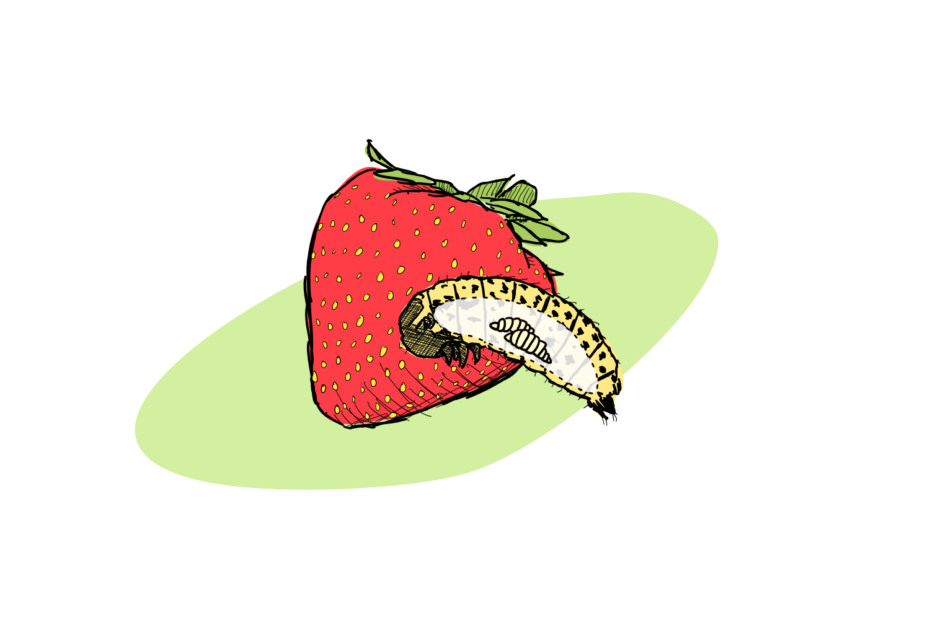 When under attack from herbivores, plants can’t rely on a speedy getaway. Instead, they use a range of defences, that include the physical (thorns and trichomes) and the chemical (bitter taste or poison). They also take solace in the fact that their herbivorous enemies have enemies of their own….

This is a story with three players. A strawberry, a beetle that wants to destroy it, and the parasitoid wasp that consumes the beetle from the inside out.

We’ve said it once, and we’ll say it forever: plants, despite their overall marvellousness, have one often-fatal flaw.

They’re not super great at moving around.

Sure, they can flap up and down, twist their way through space, and sometimes even snap or spit.

So when plants are attacked – by a range creatures that want to munch on their hard-earned sun power – their only real option is to stand, and defend.

The first method* is direct defence – the use of physical or chemical deterrence to encourage herbivores to go and snack somewhere else. The second method is, in my opinion, a whole lot cooler. It’s been shown that predators can ‘eavesdrop‘ on the chemical cries of help that plants emit when being munched upon by hungry herbivores. The predators swoop down, and remove the pesky herbivore from the plant. Which, when you look at it from the plant’s perspective, could rather be seen as indirect exploitation of the enemies of ITS enemies: predators and parasitoids. Something like a bug bodyguard.

*I could argue that the very first method of defence is attack. But that would be silly, wouldn’t it?

When it comes to defence, two lines of defence should generally be better than one. So having both a bitter taste, and setting up the right conditions to encourage survival and attraction of those bodyguards would be ideal. Unfortunately, it’s currently unclear whether the chemical efforts made by the plants to reject the herbivores, might also be sending a toxic message to the creatures that subsequently destroy those pests. This may be particularly true for parasitoids, which live within the herbivorous attacker, and are therefore entirely subjected to the diet that their host consumes.

This question- are two defences better than one- has presumed importance to the plants themselves (we like to think that they don’t want to be eaten), but is also relevant to humans. We’re fighting an ongoing battle with bugs that want to make our food their own. And although we have a range of insecticides at hand, there’s an increasing interest in improving pest management techniques by both developing herbivore-resistant plant cultivars, and using parasitoid biological controls.

In order to see whether the toxic anti-herbivoury compounds produced by plants also hurt parasitoids, Daniela Weber and colleagues set their sights on the wild woodland strawberry, Fragaria vesca, its pest herbivore Galerucella tenella, and a parasitoid wasp known as Asecodes parvilava.

Before we go into the study itself, we’re going to need to introduce you to the main characters.

Playing the role of the plant, is F. vesca, also known as wild strawberry, the non-cultivated cousin of our favourite jam fruit. In the role of the herbivore, is G. tenella, also known as the strawberry leaf beetle. As the name suggests, G. tenella is hell-bent on consumption of strawberry leaves. Apparently it doesn’t even know that the the good part is the fruit. Finally, playing the role of the pest-of-the-pest in this little drama, is the parasitoid chalcid wasp, Asecodes parvilava, the only known parasitoid that infects G. tenella. A. paravilava attacks G. tenella early in the beetle’s larval stage, inserting one or more eggs into the body of the larvae. Both organisms grow together, one inside the other, until the parasitoid prepares for its own pupation, and sets about consuming the host from the inside out, turning the leftover beetle cuticle into a mummified black shell. Often, the parasitoid will hang around in its mummy-housing until the winter has ended, and only emerge when spring comes around again. At this point, the parasitoid flies off in search of a mate, and ultimately, more beetles to lay its own eggs into.

Back to the story.

Previous work by the group of scientists had shown that different wild strawberry populations (genotypes) have highly variant resistance to Galerucella tenella. As well as being an important genetic resource for breeding resistance into our commercial strawberry cultivars (species F. ananassa), this also provides the perfect experimental system to observe the impact of this resistance on parasitoid survival and performance.

So beetles with internal parasitoids were fed on different strawberry genotypes that possessed either high (8 populations) or low (8 populations) chemical beetle defence capabilities. The scientists discovered that while there were differences in parasitoid success depending on the different strawberry genotypes, these differences did not correlate with whether the population had high or low resistance to the beetle.

Although the underlying mechanisms that link the metabolites to the parasitoid survival and success were not identified in this work, it does show that plants can successfully call upon not just one, but two lines of defence against their beetle aggressors. While the wild strawberry plants here are not ‘actively summoning’ the parasitoids, some varieties do seem to facilitate healthy parasitoid development (aka beetle anihilation)

(*this was added by Joram. And he’s not sorry).