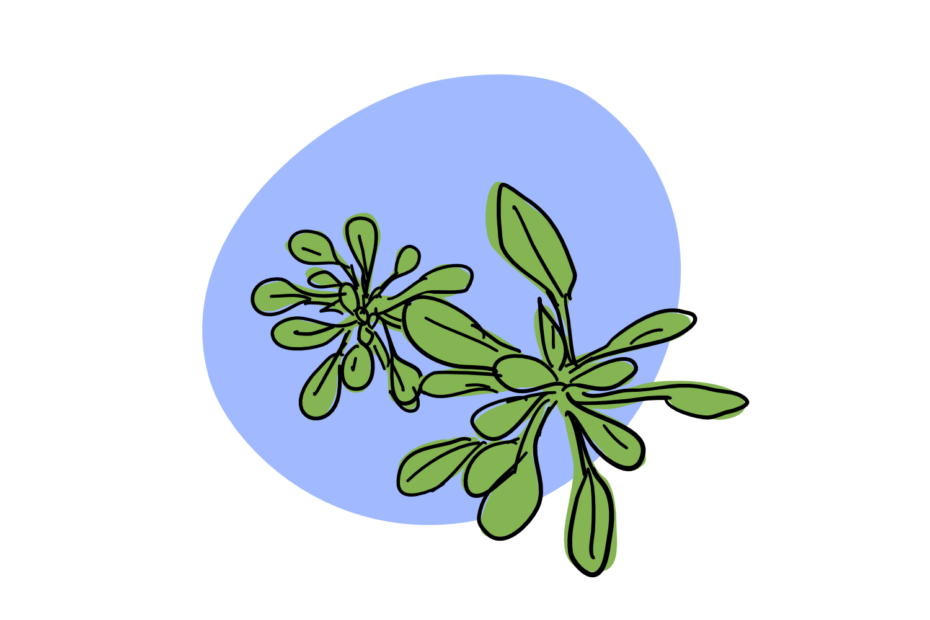 Change is a good thing but it can lead to problems. Like when you change your greenhouse to a nicer one – what if your plants don’t like it? Or worse, what if they like it so much that they don’t behave like you’re used to? Researchers at the University of Gothenburg, Sweden, made that experience and used it to uncover a mysterious molecular sunscreen.

When we grow plants for research, we care a lot for the conditions that the plants grow in. Light intensity, temperature, humidity, you name it. One big factor that influences both light and heat is the kind of lamps we use in the greenhouse. We researchers would like to spend more money on research than on the energy bill and so from time to time we swap out the lights for something that is more energy-efficient. From incandescent bulbs to fluorescent lights on to LEDs. This transition doesn’t always happen flawlessly, however.

Especially the transition from fluorescent to LED lighting showed to be interesting to the plant sciences. Mutants with defects somewhere in their molecular makeup that barely grew in fluorescent light were suddenly happy as ever under LED light – and vice versa. While any PhD student will admit that “losing” a clear visual defect in a plant can be stressful, it is actually a great opportunity to understand plants a little bit better.

For Anders Nilsson and colleagues this moment came when they moved their plant lines to a new growth facility.  They worked on a mutant in the gene coding for the protein PSB33 and when they brought the mutant (called psb33 mutant) to their new home they were in for a surprise. In the old facility, the mutant didn’t do well, it grew to be much smaller than its non-mutated control with a functional PSB33 protein. In the new facility: nothing. Wildtype plant and psb33 mutant were indistinguishable. How could that be?

In my home, light knows two states: on or off (I’m ignoring the fancy wifi enabled bulbs that can turn a living room green for some unknown reason). Outside, however, light exists on a spectrum. The light that we can see with our eyes, visible light, ranges from red to violet, with literally all the colours of the rainbow in between. Physically speaking, the colour can be represented as electromagnetic radiation of different wavelengths. Violet is very energetic and has a short wavelength of around 380 to 450 nm and red carries much less energy and sits in the range of 625 to 700 nm. On the long wavelength side the spectrum continues with invisible infrared and much later radio waves, and on the short wavelength side we follow-up violet with ultraviolet and head towards X-rays and other high energy radiation.

Before you begin to wonder when this blog turned into Plants and Photons, bear with me. The spectral quality – the color composition of light – is very important to our dear friends, the plants. The two major pigments involved in capturing light for photosynthesis – chlorophyll a and b – absorb light and help to convert it into chemical energy with the help of large protein complexes. But: they don’t absorb all colours equally well.

Instead, the two chlorophylls have each two distinct colours they like to absorb most: chlorophyll a absorbs red and blue light, while chlorophyll b prefers a slightly more orange red and a more greenish blue. You might have noticed that none of the two pigments really care for green – which might seem weird for a molecular system in green plants. In fact, the green we see from plants is because the pigments are not using the green part of the light spectrum and simply reflect it so that it bounces back into our eyes and we see it. If they’d absorb all light, the plants would be black.

Light quality is a crucial factor when growing plants inside – and modern light technologies have actually made the problem more complicated. Conventional old-school bulbs that heat a wire to the point of glowing emit a lot of infrared light – heat – and also a very continuous spectrum of visible light. Plants grown under these lights find their preferred colours amidst the whole spectrum and grow fairly happily as long as we manage to keep them cool.

With time, we switched to more energy-efficient fluorescent lights. These lamps don’t emit a continuous spectrum but instead emit a mix of several distinct colours. To our eyes, they mix together to become white, but for plants they might just miss the important blue and red parts that they need. That’s why we have special growth lights that are optimised to the light colour needs of plants.

Fluorescent lights are by far not the most energy-efficient lights. LEDs consume much less energy for the same light output and they don’t get as hot. When LEDs became cheap and therefore popular they quickly replaced many fluorescent lights. LEDs emit only a single colour, a narrow band of wavelengths. So, plant growers combined red LEDs and blue LEDs and while the light looks suspiciously purple to us, most plants actually don’t mind and thrive in this energy-efficient lighting.

To figure out what was going on with their psb33 mutant, Nilsson and colleagues started to grow the mutant systematically under different light qualities: white fluorescent, blue, red, and blue and red LEDs. They found that only a specific kind of blue LED made the mutant grow worse than the wildtype: only if the blue light was very blue, almost ultraviolet (at 400 nm), it could trigger the growth defect.

The blue light also had to be very intense, if it was “diluted” by other wavelengths (the researchers kept the total amount of light constant), the effect was greatly reduced. To figure out how PSB33, or the lack thereof, could trigger such a growth defect, Nilsson and colleagues investigated a whole bunch of mutants under the different coloured lights. All mutants had something to do with photosynthesis, but the specific molecular defects were quite different. Yet, none of them behaved like psb33 did.

This point in a researcher’s life is equally exciting and frustrating. It is frustrating not to find a clear answer, but it is also really exciting to have uncovered something new that no one has a good explanation for. It seems like PSB33 is specifically involved in reacting to blue light very close to UV-A light. PSB33 seems to protect the protein complexes that do photosynthesis from UV light like a layer of sunscreen. While UV light clearly is harmful, it is weird that it would affect photosynthesis so dramatically. After all, according to many literature sources, the two chlorophylls don’t really care about UV light. Their absorption curve is rapidly dropping around 400 nm.

This is where we enter some wild speculation from my part. What if we are wrong about the colours that chlorophylls like to absorb? While researching this story, I found another paper. In 2015, Bruce Milne from the lab of Angel Rubio at the Max Planck Institute for the Structure and Dynamics of Matter had a closer look at chlorophyll a and b. Usually, when we measure their light absorption, we do so by keeping the molecules in a solvent like acetone or certain alcohols. The solvents, however, have an influence on the measured light absorption of chlorophyll. Milne and colleagues came up with a new way of measuring the absorption of chlorophyll with minor disruptions and therefore very close to what they believe would happen in a plant. And as it turns out: both chlorophyll a and b absorb a lot of blue light just below 400 nm, which is much “bluer” than what we wrote in many textbooks.

I have no idea whether the explanation for the UV-A protective role of PSB33 lies in the “true” absorption spectrum of chlorophylls or in something completely different. Nilsson and colleagues hypothesise that a signalling cascade involving PSB33 protects against UV light, yet they acknowledge that much more research is required to fully uncover the mechanisms at play here. The researchers also have a possible explanation for the mysterious effect during the transition from one growth facility to the other: the light spectrum in the old facility must have had a very pronounced emission at around 400 nm that triggered the growth defect in the psb33 mutant.