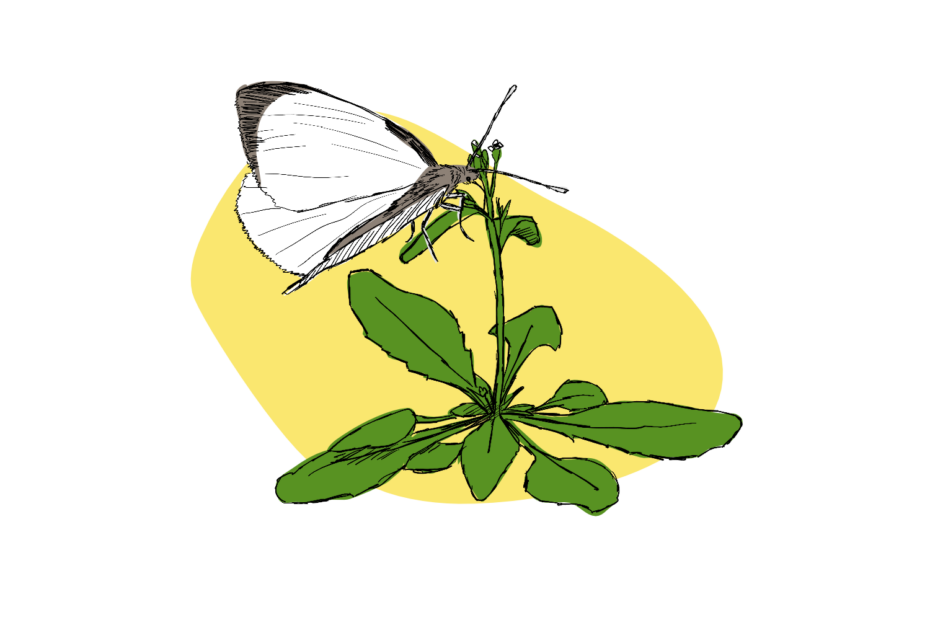 Plants are great at recognising what’s going on around them. They have built in temperature sensors and timers, they know what is up (and what is down), and they’ve worked out how to reach for and follow the sun’s light. Plants recognise when it’s winter, can tell if insects nibble on them, and wince in slow motion when researchers touch them.

Now, researchers have discovered yet another thing that plants can feel: when they’re covered in insect eggs.

Yep, we’re a little grossed out too.

Although it might sometimes look like plants as passive growers that do little more than hang around, chowing down on carbon dioxide and releasing oxygen, as we’ve detailed many times on this blog, they’re actually highly dynamic systems that constantly sense their environment and actively respond to it. Unfortunately, this ‘dynamic nature’ doesn’t go quite so far as actually letting the plants get up and walk away from trouble, which means that when it comes to threats, plants have to be extra vigilant.

It’s really helpful for the plant to know when they’re under attack, but to be honest: it is often too late. What plants really need is some sort of precognition skill, where some of them lie in a tub of goo and warn the others about crimes attacks yet to come. If the plants could stop an attack before it happened, they’d by much better off. Unfortunately, plants did not evolve precog abilities (yet). Instead, they evolved a clever early response to unborn insects.

Plants have no eyes to see their surroundings (and are also lacking a nervous system required for image recognition), so they instead evolved to recognise reoccurring patterns of molecular signals. These can be related to herbivores (herbivore-associated molecular patterns, HAMP), microbes (MAMP) and even insect eggs (EAMP). By integrating signals originating from characteristic properties of the attackers, the plant can react and organise its defences accordingly – a herbivore requires a different response than a deposited egg. HAMPs and MAMPs have been studied for a long time and researchers understand the signals and receptors involved rather well. Egg-associated molecular patterns, however, have only recently entered the spotlight.

When the butterfly Pieris brassicae deposits its eggs on an Arabidopsis leaf, the plant quickly reacts with molecular signals that lead to a number of defence strategies: the production of specific chemicals to kill the eggs, production of compounds that attract other insects that eat the eggs, or the controlled death of the cells around the eggs so that they can’t finish their development. Elia Stahl and colleagues from Lausanne, Switzerland, set out to understand what exactly triggers the plant’s response.

Whenever researchers want to understand a biological process, they search for a good system to test a couple of hypotheses in a controlled and reliable way. In this case, the system was built by crushing insect eggs, dropping the egg extract on a leaf and then measuring which genes are activated within the plants in response to the omlette-y addition. The scientists found three genes that reliably responded as part of the plant defence against egg deposition. They used the three genes to construct a GUS reporter system which creates a beautiful blue color in places were the genes are activated. Add the egg extract and see blue, it’s as simple as that (well not quite, but it is a fairly common and effective method).

From previous research, the researchers knew that the candidate molecule was probably to be found in the lipid (fatty) part of the egg extract. Lipids are essential molecules that make up membranes and, especially relevant in insect eggs, are used for energy storage. Elia Stahl and colleagues separated the lipid part from the watery part of the egg extract and applied both individually to the reporter plants. They observed blue reporter signals for the lipids, but not for the watery extract.

To figure out what molecule in the lipid phase was responsible, the researchers separated the extract further. Lipids are a large group with pretty diverse molecular structures that influence their behaviour in a solution. Some lipids like to hang out in 100% methanol, others prefer a mix of chloroform and ethanol. The researchers separated the different lipid types, and could then test these extracts in their reporter system. Once they found the one that worked best, they used even finer separation tools to narrow down the list of molecules further.

After many tests, the researchers found a group of a certain type of lipid, known as phosphatidylcholines (PC), that seemed to reliably trigger the defence response. In science, one line of evidence is not enough, so the researchers did additional experiments. By adding specific enzymes to the egg extract, they could remove the PC from the mix – which in turn became unable to trigger the plant defence. Then, the researchers made their own lipid cocktail with and without PC, and again, they could only observe the defence response when PC were present. The combination of all their experiments led to the confident conclusion that it was in fact PC that were the main trigger.

By carefully narrowing down the list, Elia Stahl and colleagues managed to pinpoint the molecules required to trigger the defence of Arabidopsis. However, you might have noticed that the scientists started working from egg extract, and in nature the eggs are probably not crushed when they’re deposited on the leaves. It could very well be that something inside the egg is able to trigger the plant defence, but that doesn’t mean that the trigger actually leaves the egg to be sensed by the plant. To answer that question, the researchers gently convinced butterflies to lay their eggs on filter paper, which the researchers then analysed. Again, they found PC, and even found that it was present at concentrations that were high enough to trigger the plant defence, as shown in previous experiments. So, PC are able to trigger the plant defence, and they are present outside the egg to be sensed by the plant.

The system of PC recognition is an example of plants using reoccurring molecular patterns, in this case EAMPs, to make sense of the world around them. PC are essential to the insect eggs, so they can’t simply evolve a non-PC containing egg. So Arabidopsis’ ability to sense PC is a clever way to recognise eggs and to react before they can hatch and endanger the plant. And it’s not only Arabidopsis that needs a good strategy to deal with butterfly eggs. The same insect can also damage rapeseed, an important crop. Understanding the chemical signals in the relationship of insects and plants could help us to come up with new strategies to boost plant defence ahead of an imminent insect attack.

2 thoughts on “Arabidopsis battles insects before they’re even born”