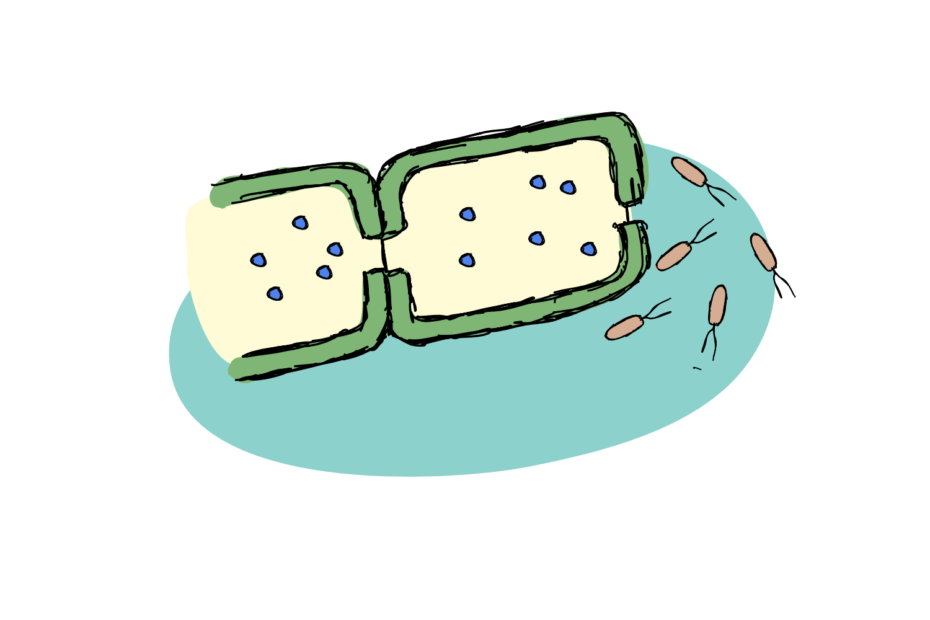 Pathogenic bacteria are the burglars of the plant world. They break and enter and wreak havoc within a plant cell as they grab whatever they find useful – mostly delicious nutrients. Just like with real burglars, the key to stopping them is a proper door – unless the burglar have a way to pry it open.

Plant cells are sturdy. A thick cell wall surrounds them and it takes some effort to penetrate it. This was great until the plant cells realised they were not an island – they needed to exchange stuff with other plant cells. They evolved plasmodesma (nice anthropomorphizing of a complex and long process, Joram). Plasmodesma are little holes in the cell wall where the plasmamembrane is the only thing that separates one cell from the other.

Plasmodesma are great for molecular trade. Molecules can be passed from cell to cell and plant cells can even regulate the type of molecule by changing the plasmodesma’s opening diameter – the aperture. What’s not so great is that unwanted guests, let’s say bacteria, can easily hijack that system and transfer their molecules through plasmodesma, too. To make transport harder, the plant cells deposit the carbohydrate callose in front of plasmodesma upon detection of a threat. Bacteria struggle to move their cargo past the blockade and the spread of the infection is halted.

At this point, we have arrived at a typical arms race between plant and pathogen – with no one having the ultimate upper hand. Continuous evolution and adaptation drives both the population of the affected plants and the affecting bacteria.

If we want to help by building a very resistant  plant we need to understand the tools used by the  pathogenic bacterium. And that’s what Kyaw Aung et al. from the Michigan State University did: they looked closely at one of the secreted proteins of Pseudomonas syringae. This pathogenic bacterium infects Arabidopsis and commercially important crops like tomato.

The researchers tracked the spread of fluorescent protein markers from cell to cell to understand the role of the plasmodesma in context of different treatments. In the presence of the bacterial protein HopO1–1, the plasmodesma failed to block the spread of the marker protein – which would mean that a bacterium could spread its virulent molecules just as easily from cell to cell. A knockout of HopO1–1 in the bacterium, on the other hand, resulted in a bacterial strain that struggled to infect new cells.

This result is a good indicator for the relationship of plasmodesma and a secreted protein. Aung et al., however, went further and identified two target proteins from the plant cell that are modified by HopO1–1. The target proteins are usually involved in the deposition of callose at the plasmodesma and were modified at their tails by HopO1–1, rendering them dysfunctional.

Interestingly, a small modification of these protein tails was enough to stop the effect of HopO1–1 on its targets. The plasmodesma became less transmissive as soon as the pathogen was detected. The implications are clear: this modification could be a straightforward target for the breeding of more resistant plants. It is much too early though to make any definitive statement on the future use of this discovery – after all the bacterium secretes 36 different virulence-related proteins. Pathogen resistance is a complex trait were a number of different factors have to come together.

Still, if we understand the tools of the pathogen we might be able to reinforce the plant cell – maybe to the point that the burglar loses interest in the house and moves on.