Promoting defence from all sides 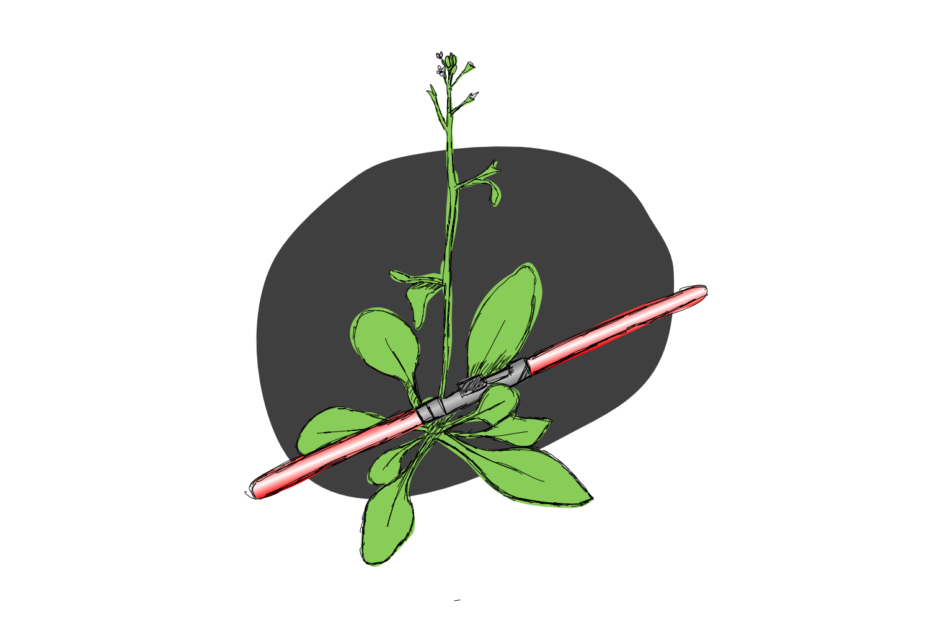 These promoters are pretty much the genetic version of Darth Maul’s double sided light saber.

Today we’re talking about bidirectional promoters, another amazing feature invented by nature, and now ready to be used by scientists in the quest to understand and manipulate plants!

Sometimes in science, you’re trolling through ‘The New Literature’ (recently published research), and you end up finding a concept that’s not new per se, but is New To You. Personally, these kind of findings hit me with with a burst of delight (this is so cool, science is sooo coool) and a little tiny bit of dread (I didn’t know about this. Was I supposed to know about this??).

Anyway, the ‘New To Me’ concept is bidirectional promoters. Promoters are the bits of DNA sequence upstream of (before) genes. Promoters themselves don’t get made into proteins. Instead, their mix of As Ts Gs and Cs encodes a message that tells the organisms when and where certain genes should be expressed. In any complex organism, the DNA itself is pretty much the same in pretty much every cell. But the expression of that DNA – which genes are getting turned on and which ones are turned off – changes. And these changes are what allows cells (mesophyll, xylem, phloem sieve cells) and organs (leaf, root, flower) to be different from each other, and what also what makes a young seedling behave differently from a mature plant.

So promoters hang around upstream of the DNA, and recruit different factors that help the DNA get made into RNA (generally then made into proteins) at the right time and in the right places. Bidirectional promoters do the same things, except they sit in between two genes that read in opposite directions. It looks something like this:

The amazing thing is that these promoters have a very practical function: they often serve two genes that are involved in a single process, and thus are a shortcut, sure-fire method to ensure that both genes are expressed at the same time.

I first read about bidirectional promoters in work by Ana Arnaiz and colleagues. They looked into two genes that had previously been shown to be induced when Arabidopsis plants were infested with pesky spider mites. The two genes ran in opposite directions, and the 645 bp region in between the genes contained a smattering of recognised promoter signals. They confirmed that disrupting the promoter region affected the transcription (i.e., how much RNA was made) for both genes, and that the promoter made the two genes respond to not just spider mites, but also Pieris barssicae (a cabbage butterfly), as well as wounding, flagellin (a bacterial compound) and chitin (part of insect exoskeleton) treatments.

They then hooked the promoter up to two common reporter genes: the green glowing GFP and the blue-stainable GUS, to check out how its activity looked in the plant. It turns out, the promoter is asymmetric, meaning it causes higher expression in one direction than the other. Which makes a lot of sense: the plant might want both of these products to be expressed at the same time, but it doesn’t necessarily need them in the same amount.

As I mentioned, bidirectional promoters is New-To-Me, but not a novel concept. It was defined nearly 10 years ago, and genome-wide searches have suggested that there might be at least 2,500 of them in the Arabidopsis genome. One particularly cool example, explored by Banerjee and colleagues back in 2013, describes an asymmetric promoter that is more active in one direction in very young tissue, but then shows higher activity in on the opposite gene as the plant matures!

Beyond their evolved function, bidirectional promoters might be incredibly useful for scientists who want to express certain genes in plants. Particularly those who are looking to engineer their plants with more complex traits, for example building an entire metabolic pathway that requires the coordinated expression of multiple genes.

Many organisms have ways of recognising when they have ‘too much’ foreign DNA put into them, and they often respond by removing or silencing that DNA – preventing it from being expressed. Furthermore, we still don’t have a particularly good grasp on using different promoters for biotechnology – and in most experiments you’ll see that scientists use the same handful of promotors time and time again. Unfortunately putting multiple repeats of the same sequence, such as that of a well-known promoter, into an organism can sometimes result in those repeated sequences getting shuffled around or, once again, their genes being silenced.

It’s been proposed that bi-directional promoters could help address both of these issues: by effectively halving the amount of promoter DNA per gene and therefore also halving the amount of times a certain promoter sequence needs to be reused. Plus, using the correct bidirectional promoters ensures that your two genes are expressed at the same time, and in the right place to the right levels!

So here it is once again. A particularly cool feature innovated by nature, that scientists now will use on our quest to further understand, and even improve, the world around the. Bidirectional promoters might just join the list of essential techniques in molecular biology, just like CRISPR, PCR or Agrobacterium-mediated transformation did before.

The one with the spiders:

The one with the synthetic promoters:

The one with the young and old tissue:

The one with the first synthetic bidirectional promotor:

3 thoughts on “Promoting defence from all sides”