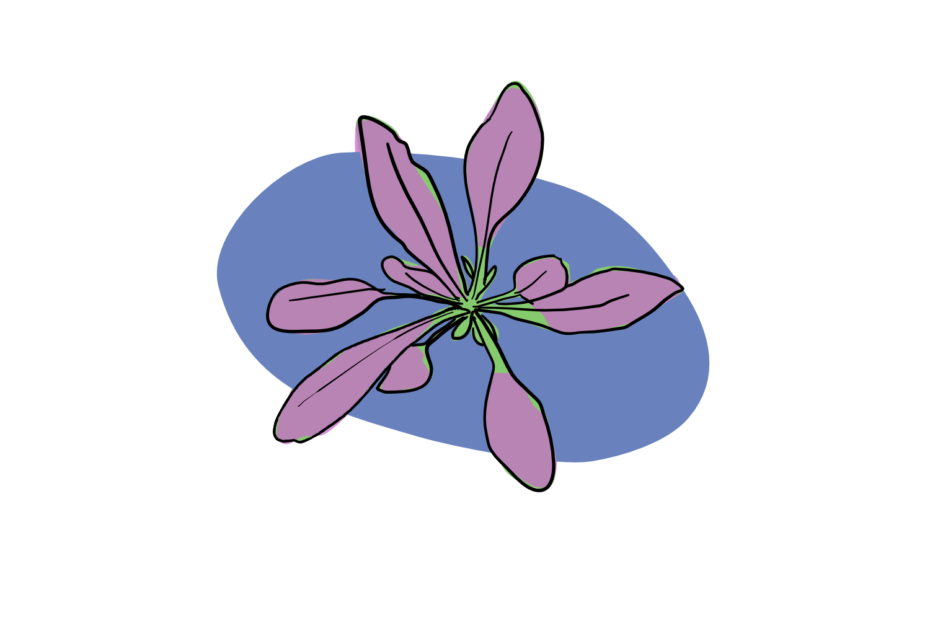 Today, bucking the bizarre cultural trend of colour coding our children in blue for boys and pink for girls, we bring you a story about boy hormones that make plants blush pink.

The ‘boy hormones’ are androgens, which are quite literally named using the Greek prefix for ‘man’ (andr-). Androgens, the most common of which is testosterone, are involved in the development of male sex organs, and of male secondary sex characteristics that come in at puberty. And male balding. They also make that happen.

As with many things that are labelled ‘ for men’, we should note that androgens are also present in women (heyo libido stimulators), and are the precursors for ‘female’ estrogens… which incidentally are also found in females and males.

Anyway, these boy hormones and girl hormones, which are really all boy-girl-girl-boy hormones, are signalling molecules. They wizz around the human body, interacting with certain receptors in certain tissues, thus stimulating certain important physiological reactions. Unfortunately, in recent years we’ve noticed that certain human-made chemicals might also be able to do their own amount of ‘wizzing’ around our bodies.

These chemicals, known as endocrine-disrupting compounds (EDCs), can change the way that the natural hormones are made, secreted, transported throughout the body, and received. Although there’s still room for a lot of research in the field, early work has suggested EDCs might be linked to some pretty nasty stuff, like cancer, birth and developmental defects and neurological disorders. Given that, and the fact that we produce man-made EDCs in a plethora of products- from plastics to personal care- some people want to understand where, and how much of certain EDCs we currently have floating around the world.

Although EDCs and other hormones can be measured by gas chromatography or mass spectroscopy within a lab, recent research has been looking into methods that make measurements easier and more accessible. Instead of big machines, some scientists are turning to biomarkers – natural systems or organisms that can be used to visualise the possible problem of EDC pollution.

Previous work in this field has involved creation of transgenic Arabidopsis plants that respond to contact with estrogen-like EDCs by expressing GUS. GUS is a common reporter system used in science – addition of a certain substrate to plants expressing GUS makes those GUS-y plant parts blue.

Which, for those of you keeping track, means that ‘girl hormones’ can sometimes make plants blue.

Similarly, recent work involved creating plants that were stimulated by EDCs to express the Green Fluorescence Protein (GFP). Although not requiring the addition of an second substance as the GUS plants did, the GFP plants still need a certain type (wavelength) of light to truely glow. Plus a microscope to see the glowing cells. Furthermore, in both cases, the GUS and GFP visible markers were expressed only in the roots of the plant. So, in order to see the presence of EDCs, some ‘sciencing’, and at least a little bit of digging, was still involved.

This problem that was solved by Kim and colleagues, who recently created a literally cleaner experimental system: Arabidopsis EDC biomarkers that rely on the production of the natural plant pigments anthocyanins.

Anthocyanins are pinkish-puple pigments that play various roles in plant life but are particularly important in UV protection. They’re what makes pansies purple and what turns autumn leaves a deep red. They’re also considered by some to be ‘healthy’, although to be honest, we’re not aware of any convincing studies that suggest that they function post-consumption in human bodies. In any case, what we care about here, is that they are colourful. And that scientists have a good idea about the factors in plants that are required to stimulate the production of these pretty purple pigments.

Kim and colleagues took one of these colour-stimulating (transcription) factors from the tree poplar (Populus trichocarpa), and coupled its fate to that of a human androgen receptor. The idea being that the androgen receptor would sense certain EDCs, which in turn would upregulate the factor, ultimately resulting in the production of pink. They put this ‘receive and response’ chimeric construct into Arabidopsis, and saw what happened.

When the modified Arabidopsis were exposed to the androgen compound dihydrotestosterone (DHT), their leaves turned pinky-red. Furthermore, applying a higher dose of DHT resulted in higher expression of the construct, and what can only be described as prettier plants!

The same group also recently described a similar anthocyanin-active Arabidopsis that responded to another EDC known as BPA. BPA is a material used in the synthesis of plastic that has recently been shown to mimic estrogen – raising public concern about its presence in products like drinking bottles.

Both of the two systems are much more convenient that the previous Arabidopsis EDC biomarker systems- they express their colour in the leaves as opposed to roots, and don’t require special equipment or the addition of dyes to do so. Nonetheless, a pink plant is neither as precise nor as powerful in its measurement as a standard mass spectroscopy – and the authors do acknowledge that their system has some limitations, for example the androgen DHT at fairly high concentrations.

Still, it’s a nice system to show the uses of plants as biomarkers – and of course, the possibilities don’t only include responses to EDCs.

Plus, at the end of the day who amongst you can truly say no to pretty pink plants?