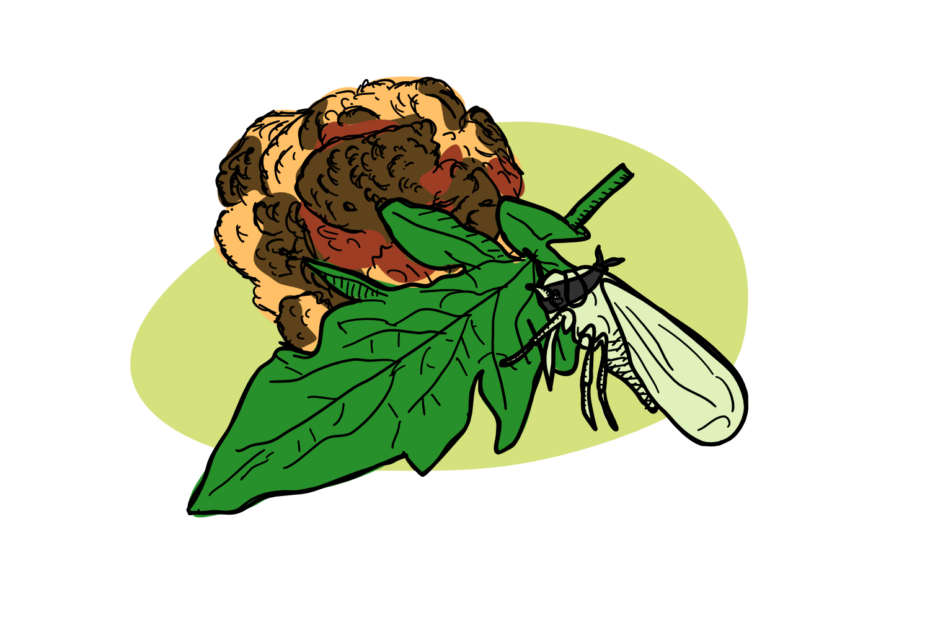 Plants and herbivorous insects have long struggled in an evolutionary arms race. Now, in the first example of animals thieving plant genes, research shows that sweet potato whiteflies have overcome plant defences by looting the plants’ own genetic arsenal.

For over 400 million years, plants have struggled against a barrage of insect herbivores that have a singular wish of literally eating them alive. To protect themselves, plants have developed a diverse suite or defensive weapons, in the form of chemicals that can horrify or harm the bugs that bite them.

A common group of these chemicals, known as phenolic glycosides, can strongly affect the behaviour, growth and development of insects, and is widely found across plant species. Yet despite the presence of this substance, some pests persist. The sweet potato whitefly, Bemisia tabaci, can feast on over 600 host plant species, despite many of the plants using phenolic glycosides as a defence. By sucking on the sugary phloem juice of plants and adding insult to injury through the transmittance of plant viruses, B. tabaci is the scourge of the plant world, and one of the most devastating crop pests on the planet.

To better understand how the whitefly overcomes plant defences, Jixing Xia, Zhaojiang Guo, Zezhong Yang at the Chinese Academy of Agricultural Sciences, and colleagues in China, Belgium and Switzerland first looked at the whitefly’s own weapons arsenal: it’s genetic code.

Within plants themselves, it’s known that phenolic glycosides can be modified by certain enzymes known as malonyltransferases (MaTs for short), and further research has suggested that modification by MaTs is an important step in detoxification of the glycosides. So the researchers combed the whitefly genome in search for genes that might encode a similar whitefly MaT, and discovered, not one, but two!

This in itself, was a somewhat bizarre finding. Not only do the genes look really similar to MaT genes found in plants, but also, they can’t be found  in any other non-whitefly arthropod species. In fact, to date, MaT-like genes (genes that include important sequences required for MaT activity) have only been found in plants, fungi, and one bacterium. Together, these data suggest that the whitflies didn’t evolve the genes themselves, but simply stole it from the plants.

As it turns out, genetic thievery, while not the most common way to make new genes, is not completely uncommon in the wide world we live in. In fact, it even has a name – horizontal gene transfer – a term that distinguishes this cross-species genetic exchange from the much more common vertical transfer of genes from parent to child.

Still, horizontal gene transfer (HGT for short), isn’t completely easy. It requires the gene to first be taken, and then to also be integrated into the thief’s genome, and activated (i.e., be able to be expressed), and then maintained (e.g., by conferring some positive advantage). While these things are all very very rare, over the huge expanses of evolutionary time, they can happen. Of course, another prerequisite is that the thief has access to their genetic prize in the first place. The need for close contact explains why HGT seems to be somewhat more common in parasites (who continually leech of the life-blood of their hosts), or, in this case, a vampyric herbivore!

[By the way, if you’re interested in an example of a plant using HGT to its advantage, read our post here].

Once they had identified the stolen gene, the researchers wanted to better understand the way the bug was using its pilfered treasure. For example, by looking at when and where the gene was turned on, they could demonstrate that the gene was most active in adult flies and within the gut. All the better to detoxify you with, my dear.

To ultimately demonstrate that this turned on gene was actually producing an active, detoxifying enzyme, the scientists observed what happened when the bug genes were disrupted (the bugs were less likely to produce offspring and more likely to die when they ate phenolic glycosides), and what happened when the MaT enzyme was mixed with phenolic glycosides in a test tube (the glycosides were chemically altered – on their way to detoxification). They even checked the excrement on the bugs – tactfully named ‘honeydew’ – to understand how the glycosides came out the other end of the bug when it had, or didn’t have, the detoxifying enzymes.

The final experiment involved creating modified (transgenic) tomato plants that carried a gene fragment designed to disrupt the whitefly’s own MaT. In eating the tomato, the whitfly would not only consume the phenolic glycosides from the plant, but also take up a new weapon, designed to destroy the bug’s ability to detoxify the chemicals using its MaT. In transgenic tomato-feeding experiments, almost 100% of the whiteflies died, as compared with just 20% bug death from non-modified tomatoes.

Overall, the study provides the first evidence of an animal stealing a plant gene, and convincingly demonstrates that this thievery helps protect the bug against the plant’s own chemical defences. Furthermore, the research shows a ‘next step’, that, with a little human help, that weapon can be rendered useless again – which could ensure that the plants once again win out in the evolutionary war.