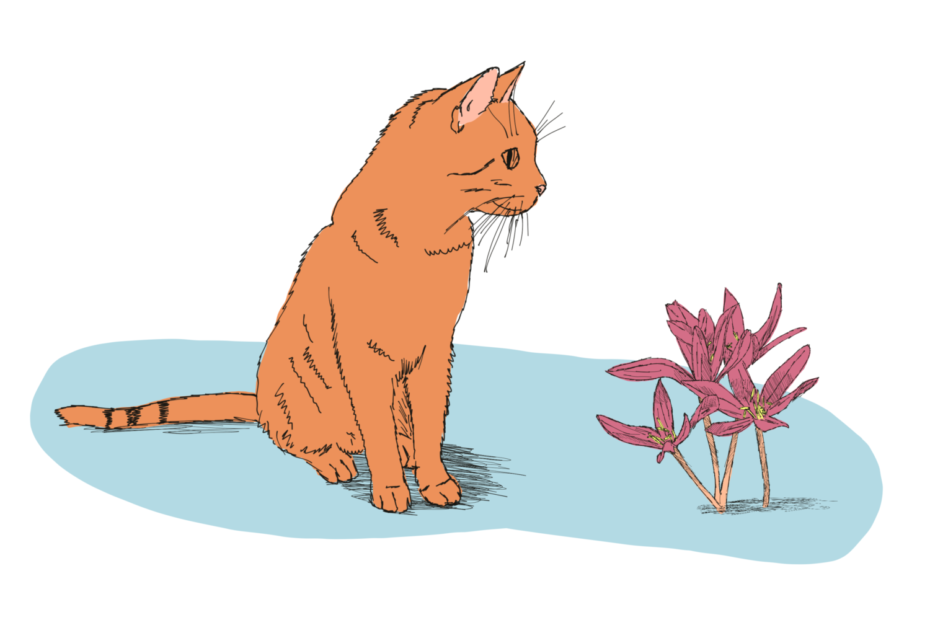 If you have furry friends, you probably know about the things that hurt them. And because we here at Plants and Pipettes are ‘Team Cat’, we’re talking today about a certain plant that can be deadly to them. And also naked ladies. ‘Let’s not get too clickbaity’, I thought. Followed immediately by ‘I should write about cats and naked ladies, the two things that the internet loves best’.

One of the many killers of cats, besides curiosity of course, is Colchicum autumnale. Also called “autumn crocus”, “meadow saffron” or, “naked ladies”, we’re guessing as named by people who have never seen at least one of the two . This inconspicuous pink flowering plant is definitely not a candidate for edible flower arrangements. All of it, leaves, flowers, seeds and corm contain the toxic alkaloid colchicine, with the flowers and seeds containing the most.

In any cell, animal or plant, colchicine binds to a part of the internal scaffolding in the cell, the microtubules, more specifically the tubulin. The microtubules give the cell structure and act as guiding rails for processes like molecular transport. Colchicine prevents tubulin from connecting to its binding partners. Essentially, the internal scaffolding of a cell gets disrupted and that is no good. Ingestion of colchicine in toxic amounts leads, amongst other symptoms, to organ failure – after looking at some descriptions, I decided to spare you the gritty details. If you’re a person or pussy cat, the bottom line is: don’t eat colchicine.

Or, as I should rather say: don’t eat too much colchicine. Interestingly, the alkaloid can also be used in medicine to treat gout and Mediterranean fever, both of which are inflammatory diseases. Don’t ask me to go into more detail, I’m not that kind of a doctor. Mechanistically, its binding to tubulin and the subsequent disruption of cellular processes inhibits the painful inflammation of body tissue. As a result, colchicine containing drugs were prescribed over 1 million times in 2016 in the US.

Colchicine is not only feared by cats and toxicologists and admired by doctors, it is also valued by plant breeders. Plants, like all other organisms, rely on microtubules having an extra special role during cell division. When the cell is about to divide, all chromosomes line up in pairs in the center of the cell. Microtubules attach to the chromosomes and pull each pair apart so that they end up at to opposite ends of the cells. The cell then splits right in the middle and two daughter cells, each with a set of chromosomes, remain.

When colchicine comes into play, it prevents the microtubules from doing their job. Instead of nicely separating the chromosome sets, they all stick together and end up in one daughter cell while the other doesn’t get any. Most organisms react a bit over-dramatically to this – both daughter cells die.

Well, plants don’t. Having twice the chromosomes in one cell is actually a fairly common occurrence in the plant world and as long as the total number of chromosomes is divisible by two, plants don’t really mind being overloaded. In fact,this chromosome duplication phenomenon, known as polyploidy, can help plants develop certain traits that we humans find interesting – like having larger fruit, being more robust or growing taller. Wheat has six copies of its chromosomes (it’s hexaploid), tobacco has four (tetraploid), and strawberries are undecided and therefore have either 2, 4, 5, 6, 7, 8 or 10 copies of their seven chromosomes. The advantage of having multiple copies of chromosomes is the surplus of genetic material that can be changed, reorganised or be used as a backup in case another copy breaks. A polyploid genome is both more robust and more versatile in its adaptability to environmental changes.

Because of these advantages, breeders try to create polyploid crops with more than the original two copies of the chromosomes. Sometimes it’s enough to cross two species and the offspring keeps the copies of both parents and becomes polyploid. In other cases however, crossing is not an option or the cross results in the wrong number of chromosomes. This is when breeders reach for the bottle of colchicine.

Plant breeders treat the seeds or some of the plant’s tissue with a colchicine solution and introduce disruptions in the chromosome allocation – one daughter cell keeps all chromosomes and the other dies empty handed. The polyploid cells continues to grow and eventually the whole plant is polyploid.

One of the plants created through induced polyploidisation are seedless watermelons. They have an uneven number of chromosome copies (in this case 3) and are infertile – they don’t produce pollen. For propagation, breeders have to use fertile pollen from other varieties. Just so that we don’t have to interrupt our melon munching by spitting out seeds. Thank you, breeders!

So, depending on who you are you might have a very different stance on Colchicum autumnale and its colchicine. If you have gout, you’re happy for its remedial effects. As a toxicologist you fear its devastating disruption of cellular processes. If you’re breeding plants, you rejoice for colchicine’s effectiveness in inducing polyploidy in crops. And if you’re a cat you feel betrayed by the tasty looking flower that so viciously kills you (…also if you’re a cat, how are you reading this?)

This post is dedicated to Eri and her cat, Loki, Lilu, and Mingin.

There are so many case studies for accidental (and sometimes willful) ingestion of colchicine on google scholar. Only read them if you’re ready for some nasty medical descriptions.

A list of all the different types of strawberry polyploidy can be found here.

An article by Khan et al. (2006) (behind paywall) of toxic plants for cats and dogs.

2 thoughts on “Cats and Naked Ladies”