Chlamy’s Cousin and the Curious Case of the Blood Snow 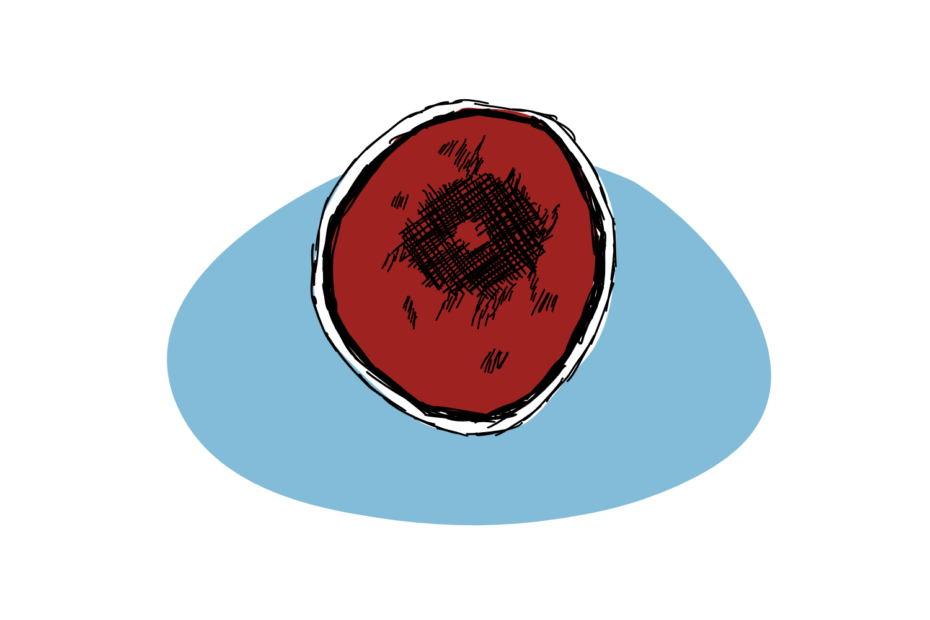 We’ve all heard the warning ‘don’t eat the yellow snow’. But what should you do if you come across of patch of snow that’s red as blood?

Red snow, blood snow, or watermelon snow, is a phenomenon that has been observed for hundreds of years – with Aristotle himself one of the earliest to record the terrifying sight. Seen often as faint tints of pinks, or sometimes patches and streaks, the colour can deepen with springtime melting, to reveal a vicious reddish hue.

Despite being recognised for more than 2000 years as an oddity, the true cause of the colour was not understood until the last couple of centuries. Original speculators suggested pretty pollen, or even mineral deposits, in line with the harshness of the environment, which seemed unlikely to support life. More recently, scientific opinion has flickered past animal and lichen form, to settle on algae, specifically, Chlamydomonas nivalis.

If you’ve heard of the genera Chlamydomonas before, that’s likely because C. nivalis’ cousin, C. reinhardtii is a common single-celled model alga used in molecular biology. You can read more about that here.

Although red snow can be seen with the naked eye, Chlamydomonas nivalis, like its more famous cousin, is a single celled alga. Like most algae, C. nivalis prefers a watery environment – in this case thriving in the liquid water between snowy crystals. C. nivalis has a single chloroplast, which fuels its growth. Yet unlike most algae species (and let’s be honest, most species, period), C. nivalis growth continues in a fairly happy manner when the algae is chilling at 5 degrees Celcius. It can also survive at temperatures below 0, although this requires a particular life cycle trick.

C. nivalis spends a portion of its life as a vegetative motile cell, recognisable to us as a fairly standard-looking single-celled algae. Powered by whip-like tails known as flagella, the algae can move through the snow layers in search of the optimal moisture content, light and temperature. As times get tougher, the algae transitions from green, to orange, to red – developing into an immotile hypnoblast, a life stage in which it will spend most of its time.

These spore-like hypnoblasts have thicker cell walls to protect from both the extreme cold and dry of polar winter, and to prevent rupture in repeated freeze-thaw cycles. Hypnoblast transformation involves molecular stockpiling – including the accumulation of sugars and lipids. Also manufactured for the long winter are massive stocks of carotenoids, which help the algae survive the extreme irradiation of their environment. In particular, the red colouring is granted by astaxanthin – which happens to be the same pigment that gives salmon their pinkish hues. (We’ve written more about this here). Astaxanthin acts both to absorb some of the incoming light- protecting the more delicate light receptors of the photosynthetic machinery – and can play a role as a powerful antioxidant. And so C. nivalis hunkers down for a long winter, drifting somewhat aimlessly as tiny red dots in the snow.

This powerful trick of life cycle switching allows C. nivalis to survive in some of the harshest environments on land. Unsurprisingly, C. nivalis has more recently received attention not only for its tendency to terrify, but also for its special skills – including the stability of its enzymes at low temperatures, its antioxidant capacities, and its dynamic cold response and repair mechanisms.

Finally, for those of you who grew up with the useful advice of ‘don’t eat the yellow snow’, you might like to know that a 1997 study using 7 volunteers found that eating red snow does not cause diarrhea. Just in case that question was weighing heavily on your mind.