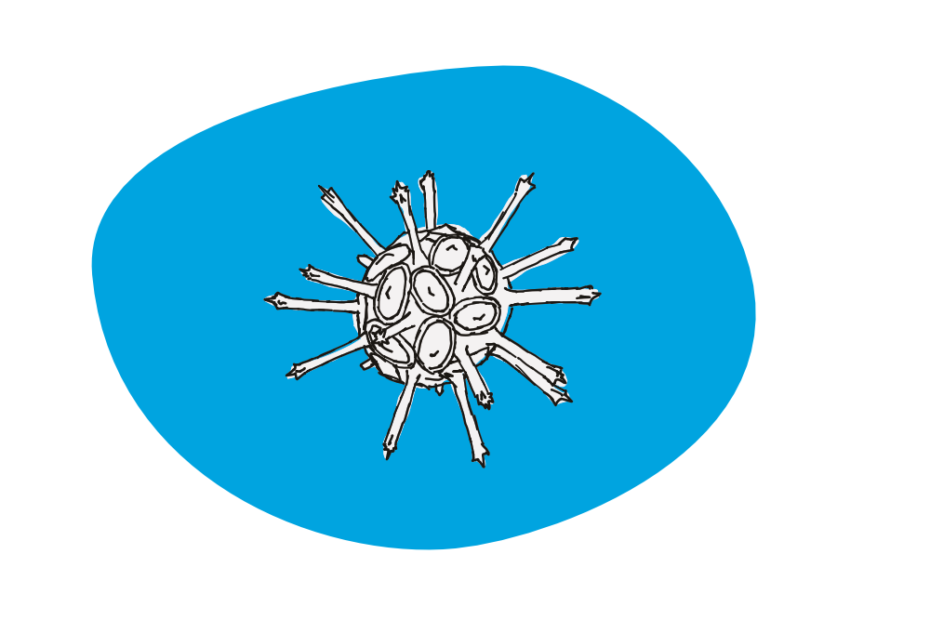 Ok, ok. So this blog is supposed to be about plants, and the amazing things that they do. But what we’re talking about today isn’t actually a plant. Instead, it’s a bunch of unicellular algae known as coccolithophores. Here are our four favourite facts about these fascinating not-quite-plants.

Being a coccolithophore is defined by having coccoliths, which are tiny scale or plate like structures that decorate the algae. The coccolith scales are tiny, only about 1-10 one-thousandths of a millimeter in diameter. And yet they come in a range of incredible shapes. Some look like hubcaps, others take the form of huge spikes, and others still look like angel trumpets.

Coccolitho-two: ….but we don’t really know why

We’re not entirely sure why coccolithophores make scales for themselves, but we have some theories. It’s possible the algae want to simply make themselves less edible, and protect themselves from being eaten. Other ideas suggest that the shells can be used to control light, either protecting the algae from by blocking the sun, or perhaps helping to funnel that light to facilitate proper photosynthesis in deeper parts of the ocean. It’s also been proposed that the heavy shells act as a ballast. Producing more coocoliths helps the algae sink deeper into the water, while shedding them lets it float back to the surface.

What we do know, is that the scales don’t seem to be essential for survival. For several species at least, losing the ability to make coccoliths can still lead to a completely healthy life- in the lab environment at least.

Coccolitho-three: They’re tiny, but you can see them from space.

That little guy in the picture above is a coccolithophore species called Emiliania huxleyi, or E-hux for short. It’s one of the most well studied coccolithophores (it has a sequenced genome), probably because it’s the most abundant coccolithophore in the world.

One whole E-hux, decked out with 30 or so coccolith plates, is still only about 4 micrometers (i.e 4 one-thousandths of a millimeter). But when they get their bloom on, they can fill up (parts of) the ocean. Because coccolith shells reflect light, large growths of coccolithophores can create an opal-y sheen to the seawater. And this, can be seen from space.

These large blooms might be problematic for other organisms in the area- previous blooms have been linked to lower numbers or redistribution of marine creatures in the area. But there are also some benefits behind the blooms.

Those tiny shells are made of calcium carbonate (like limestone), so coccolithophores and their coccoliths are an important global carbon sink. Unlike most plant matter, which degrades nearly as soon as it dies, thus releasing fixed carbon back into the world, coccoliths are fairly stable. The dropped shells sink gracefully to the bottom of the ocean. And despite the tiny size of the shells, the huge number or coccolithophores mean that globally they drop an estimated 1.5 million tonnes of calcite per year.

Coccolitho-PHORE: they could be used for nanotechnology

We’ve mentioned that coccoliths have amazing and intricate shapes. In fact, making such complicated structures at such a tiny scale is something that we humans cannot yet manage. When we make calcium carbonate crystals, they just come out as little cubes.

So it’s been suggested that coccolithophores and their coccoliths could be useful in the field of nanotechnology. Some ideas include using them for light polarising or focusing (depending on the type of scale) at minute scales. Others suggest they could be used as tiny pores for microfluids. Or, because they are strong yet dissolve in acidic conditions, they could even be used as a drug delivery system.

Ok that’s it, those are our Phore favourite facts about coccolithophores. If you have any more that you are fond of, let us know in the comments. Or if you have another weird (plant-y) organism or bunch of organisms that you think we should feature, let us know too!

We noticed that the Nasa fact sheet on Coccolithophores calls them plants. In the imaginary war of plants and algae, we’re kinda ok with that. 🙂 https://earthobservatory.nasa.gov/features/Coccolithophores

Want to understand how coccoliths can be exploited by us humans? Check out this great and very short review: