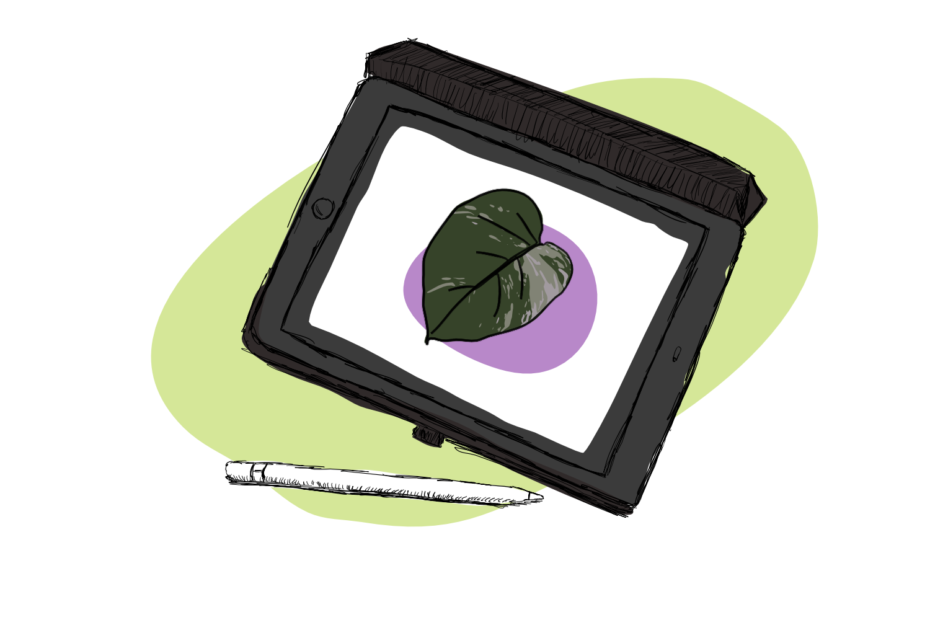 I’m not an artist. I’m a fairly conventionally trained molecular biologist and I spent way more time assembling acrylamide gels than on the drawing board. Still, I draw most of the images here on the site. Today, I’ll show you how.

Tegan and I knew from early on that we needed images to go with the text posts – we just didn’t know how we’d get them. Stock images look like, well, stock images – and repetition becomes a problem when half of your stories are about RNA or DNA. Plus we couldn’t afford to license anything. Drawing ourselves seemed like the best option, with only one problem: neither of us could draw.

This changed when I bought myself an iPad with the Pencil. I still couldn’t draw properly, but digital drawing is so much more forgiving for beginners than real world pen-on-paper drawing and so I quickly dabbled in digital illustration.

Today, I want to walk you through the workflow of a standard image and hopefully help some of you. Maybe you want to start a similar blog and talk about your field of research, get creative on the scientific side of instagram or just make your posters a bit prettier.

As mentioned above, I use an iPad (6th Gen) with the Apple Pencil. I bought a Paperlike screen protector that gives the surface texture some more roughness than just plain glass (at the expense of a bit of sharpness). It feels not completely unlike paper.

That’s about it. If you don’t want to buy an iPad, a cheaper version would be a pre-existing computer with a cheap drawing tablet.

I tried a few things (procreate, concepts and some others) and ended up using Affinity Designer as my favourite drawing software. Here is why: Affinity Designer comes in desktop and iOS versions with almost complete feature parity, meaning you can start drawing on the iPad and finish up the file on the mac with no conversion issue.

All you need to do is buy both software versions (about 22€ on iOS and about 50€ on Mac) and you’re good to go. Affinity Designer is a vector illustration software quite similar to Adobe Illustrator. Unlike the Adobe software, the Affinity software is a one-time purchase and then it’s yours forever.

I prefer Affinity Designer over commonly used apps like procreate because a vector software is so much more forgiving for beginners. Every single line stroke can be edited later on. Used the wrong line width? Change it! Adjust the colour? Already done. Export at high resolution? Any time!

If you have choose a different software on a different platform, I’d recommend looking for proper pencil/drawing tablet support, vector based editing and stable workflows with presets. Tegan, for example, is using a basic Wacom tablet (you can get them, or similar, for around the 50 euro mark) with SketchBook, a free drawing software.

Let’s have a look at what I’m actually doing. All screenshots are from Affinity Designer on the iPad but the idea can be transferred to any other vector based illustration software.

I begin the workflow by selecting a template image of what I want to draw. I like using services like unsplash as they have lots public domain images. Here I chose a pumpkin from unsplash that I imported into a document set to 1500×1000 pixels.

After roughly positioning the image on my canvas I start drawing on a layer on top. Pro tip: if the image is really dark and you can’t see your black lines on top, use a bright red colour instead. You can easily change it to black once you’re done.

Finding the right edges to draw on is something I learned with time. I aim for the sweet spot between enough detail to be recognisable without attempting to be photorealistic (and failing at it).

Once I’m happy with all the lines, I simply hide the bottom layer and voilà, I have a simple line drawing of my pumpkin.

I usually add some more details without the base layer visible. This way, I can get an idea of what is missing to get a convincing drawing. In this case, I added some lines to give more detail to the surface of the pumpkin. Adding a little bit of shading gives the drawing more depth and makes it look a tad more professional than it really is.

Finally, I add the colour shapes on the bottom layer. I simply draw another object following the outlines of my coloured faces and then select a colour. I’m terrible at picking colour so I try to go for more pastell-y colours that are harder to mess up.

I try to avoid gradients as I am really not great at doing them properly. I try to keep the amount of colour minimal, again to avoid easy mistakes. I rarely use more than a few shades. If I want to add darker areas, I add shading with lines instead of picking a darker colour for that area.

My finishing touches include emphasising outlines, positioning on the canvas and adding things like labels or the background colour blob of our featured images. I then simply export as a .png and drop it in the respective article.

While the iPad was the biggest enabler for myself to get to something I’m happy with, it is not essential. There are way more budget friendly entryways to digital drawing – just look around for used hardware and you’ll quickly find something to start with.

The important thing is to start drawing and never stop. You’ll get quicker, better and more satisfied with what you can accomplish. I’m picking up traditional analogue drawing now based on what I learned on the digital playground and it feels great. I always wanted to be able to draw.

1 thought on “Drawing Plants and Pipettes”