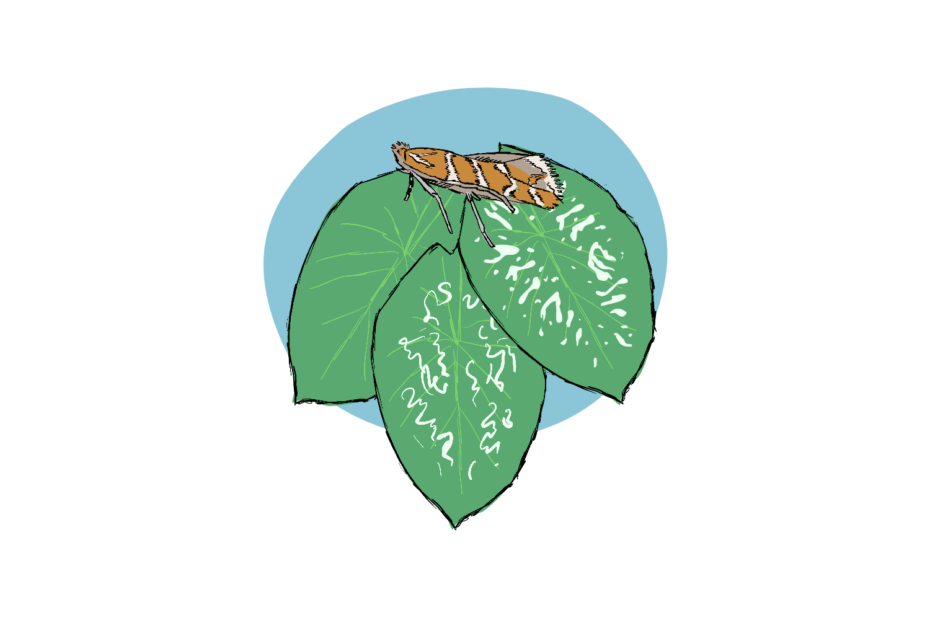 You may have stared lovingly at a variegated Monstera, asking yourself if there will ever be a day when you can afford such beauty… but have you ever wondered why that beauty even exists? In a study that involves – of all things – white-out (Tipp-Ex), scientists find a link between patterns of white cells of plant leaves, and a desire to avoid herbivores.

Variegation, the presence of pale or white sectors on the leaf of a plant, is a desirable feature for plant breeders and collectors alike. But it isn’t always clear whether variegation is an actually desirable trait, when looked at from the point of view of the plant.

While some plants produce patterns by bubbling up their skin-like epidermis layer (read more about that here), larger sectors of pale or white tissue tend to indicate one of two things: broken chloroplasts, or no chloroplasts at all. Which in the end, means less photosynthesis for the plant as a whole, and less energy to go around (one of the reasons that variegated plants can be harder and slower to grow). Although it’s clear that many of the variegated plants that we see around our house have been selected by breeders, as opposed to evolutionary process, it’s nonetheless true that variegated plants of various kinds exist in nature, particularly found in the understories of tropical forests.

In light of the photosynthetic penalty that the variegated plants must face, scientists have puzzled over reasons why they would persist. Way back in 1986, Smith came up with seven possibilities.

The first of these, is less of a reason and more of a ‘lack thereof’: there is no current reason for variegation, the plants exist by accident or as a relic of some previously-useful behaviour. Reasons two and three deal with light requirements, suggesting that plants might actually be advantaged by having some leaves that up less light either at different times, or in different environmental spaces. Reasons four to six involve herbivory. That variegated leaves might be harder for herbivores to see; that they might look less tasty; or that different types of variegation increase the visual diversity of the plant and therefore and make it less easy for herbivores to choose its next leafy victim (being the most abundant often makes you the likeliest prey). The final reason suggests that the pale colour itself is directly linked to a type of chemical defence.

(By the way, we’ve previously discussed different types of variegation and its reason for existing – including Joram’s favourite hypothesis – ‘that variegation mimics bird droppings’ over here).

In a study published in 2009, Ulf Soltau and colleagues investigated the possible causes of variegation in the Ecuadorian rainforest plant Caladium steudneriifolium. On an initial sweep of the forest, in which they surveyed more than 3000 C. steuneriifolium individuals, they noticed that 64% of plants had plain leaves, while 36% had variegated leaves. In defiance of the ‘light availability’ hypotheses, the amount of variegated plants didn’t correlated with the light intensity throughout the rainforest. But it did seem to have an impact on the likelihood of the leaf being infested with mining moths. Variegated leaves were TWELVE times less likely to be infested than plain leaves!

The scientists observed that the variegation itself strongly resembled recent damage from mining moth larvae, leading to the hypothesis that variegation effectively tricks the moths into thinking that the leaf in question has already been occupied.

In order to test this hypothesis, Soltau and colleagues pulled out their pencil cases and got to Tipp-Exxing! Using the white correction fluid, they painted some leaves to mimic the natural variegation. They also added another control group, using correction fluid without the white pigment – in case the application of the fluid itself, as opposed to its white colouring had an impact on the outcome. They waited three months, and checked which plants had been mined, and which had been spared.

The results indicate no difference between green leaves, and clear-Tipp-Exxed leaves (the ‘chemical control’), which had approximately 8-9% infestation rate. In contrast, the naturally variegated has a much lower rate of infestation, at 1.6%, while the painted leaves had just 0.4% infested.

This simple experiment suggests that the white variegation could act as a visual cue, which discourages moth mothers from depositing their eggs on the leaves (leading to larval mining), possibly due to the belief that the leaf had already been ‘mined’.

We should note that this example is just one possible reason for variegation, which seems to apply to this species in this environment: it doesn’t rule out the other variegation hypotheses.

What’s nice about the moth mechanism, is that it also explains the stable presence of a certain number of variegated plants within the population. Having variegated plants might protect against moth mining, compensating for the loss of photosynthetic leaf area. However, this kind of mining mimicry may only works if some plants in the population do it – if all plants had patterns the moth would not be able to choose against the ‘occupied plants’, and the advantage could be lost. Alternatively, in the evolutionary arms race of nature, the moths might even ‘learn’ (over evolutionary time) to look more closely, to work out who’s Faking It.

A big thanks to C. L. for sending us this article. If you have any cool plant stories you think we should write about, please let us know!

We couldn’t find this online, but the authors kindly provided a copy when requested via ResearchGate.