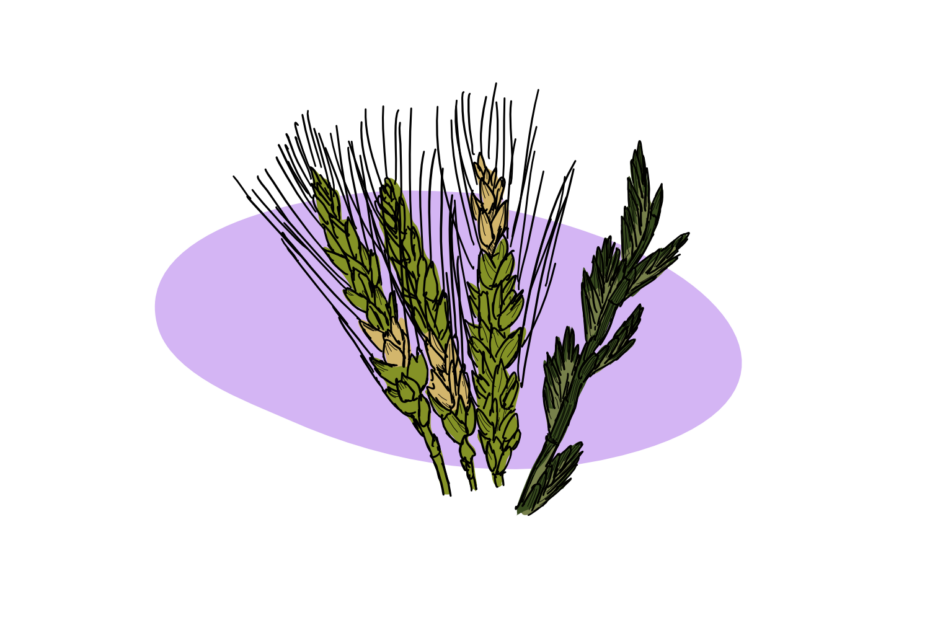 While fungi can be very beneficial to a plant, some other Fungi are just no fun when you want to grow crops. We talked already about a banana fungus destroying plantations across the world, and also cereals like corn, barley and wheat suffer from various fungus-induced diseases. Now, researchers have found crucial details on a gene that helps to fight the fungal infestation.

Fungal diseases in crops are a two-fold problem. First, fungus growth takes away nutrients and energy from the plants. Then, the plants’ defence system ramps up and bears a further cost on the energy budget and as a result, fungi infested crops suffer from a severe loss in yield.

On top of that, many fungi produce toxins of various kinds that can spoil the little harvest that is left. Mycotoxins can cause a number of diseases, often induced by moulds growing on produce after it leaves the field. A few of them, however, spread their toxic compounds already on the field. Fusarium graminearum causes the Fusarium Head Blight, a disease that affects wheat fields during particularly wet seasons. Its toxins can linger on the grain for a long time and therefore contaminated grain has to be destroyed – a massive loss for any wheat grower.

Usually, the most straightforward response to fungal diseases is the spraying of fungicides. This practice brings two problems, however. Growing concerns and awareness of the effects of pesticides on the environment limit the amount and type of fungicides that can still be used. And, more importantly, fungicides do very little to fight F. graminearum. Its occurrence during wet seasons means that rain is likely to wash off the compound from the grain. And in the ground, the fungus can live in up to 60 cm depth, far away from the surface-applied fungicides.

So, wheat breeders instead resorted to the search for inherently resistant wheat varieties. They found such a candidate in a Chinese heirloom wheat variety and managed to cross it with high performance lines to increase their resistance against the fungus. However, they had no idea what gene exactly was responsible for increasing the hardiness of wheat.

More recently, another resistance trait got the attention of researchers. The trait Fhb7 also increases wheat resistance against Fusarium, but this time it wasn’t identified in wheat but in a close relative, the wild grass Thinopyrum elongatum. Breeders also crossed this trait from grass into production lines of wheat.

In plant breeding, it often doesn’t matter to know the exact gene identity and function to improve crops. Instead of looking for a specific gene with a start and stop, breeders just look for broader regions, encompassing a large number of genes that as a group are linked to resistance. Breeders summarise the effect not because they’re lazy, but because it speeds up breeding and circumvents the necessity of fully understanding complex genomes like the one from wheat. It is often good enough to know the region on the chromosome where an interesting trait sits.

Researchers, on the other hand, usually would really like to know what gene is responsible for a trait and how it does its job. You might wonder why that is, given that breeders could cross the trait into wheat already before.

Knowing the exact sequence allows breeders to perform precision breeding by inserting just the required gene into a new variety. They could change the time and place the gene is expressed by coupling it with specific promoters. They could also start to look for variants of the gene in other plants and add them to their crop varieties to increase the range of fungus resistance. Knowing function and sequence of gene offers a whole new world of possibilities.

Hongwei Wang and colleagues set out to properly identify the mechanism behind Fhb7’s Fusarium resistance. And what they did is a prime example of narrowing down on the target gene.

Wang et al. began by analysing the whole genome of the wild grass Thinopyrum elongatum. From previous studies, they knew that the responsible gene had to sit somewhere on the long arm of one chromosome. Next, they went and looked at the gene activity (by analysing their expression profiles) to narrow done the list of candidates to just a few individual genes. One by one, they went through the list and created knockout lines that lacked the respective gene. By testing these lines for their resistance against Fusarium, they could pinpoint the single gene responsible for the Fhb7 trait: resistance against Fusarium graminearum.

Back to the research team: they wondered how the Fhb7 gene worked and where it came from. They found that the protein encoded by the gene is a glutathione S-transferase that is able to detoxify a group of Fusarium mycotoxins called trichothecenes. They even designed and conducted activity tests of the enzyme to show that it is active.

The origin of the gene is even more exciting. With the full sequence at hand, the researchers could quickly search for the same sequence in other organisms. What they found was not a plant, but another fungus: Epichloë aotearoae. This fellow lives on wild grasses like T. elongatum. A long time ago, the Fsb7 gene jumped from the fungus over to the wild grass, giving it a big selection advantage by increasing the resistance against Fusarium. And much more recently, the gene jumped again (with a little help) to wheat and other cereals.

Resistance genes are a big thing. We can’t and don’t want to increase the application of chemical pesticides on our crops. Breeding new resistances into crops plays a big role in reducing the need for pesticides and increasing the yield stability (that is the amount of harvested crop from year to year) of a farming system. We can only get so far by knowing just the general location of a gene and so studies like the one from Wang et al. contribute a lot to the constant progression in plant breeding. New tools paired with new knowledge will lead to better crops – some of which are inherently resistant against fungi and other pests.