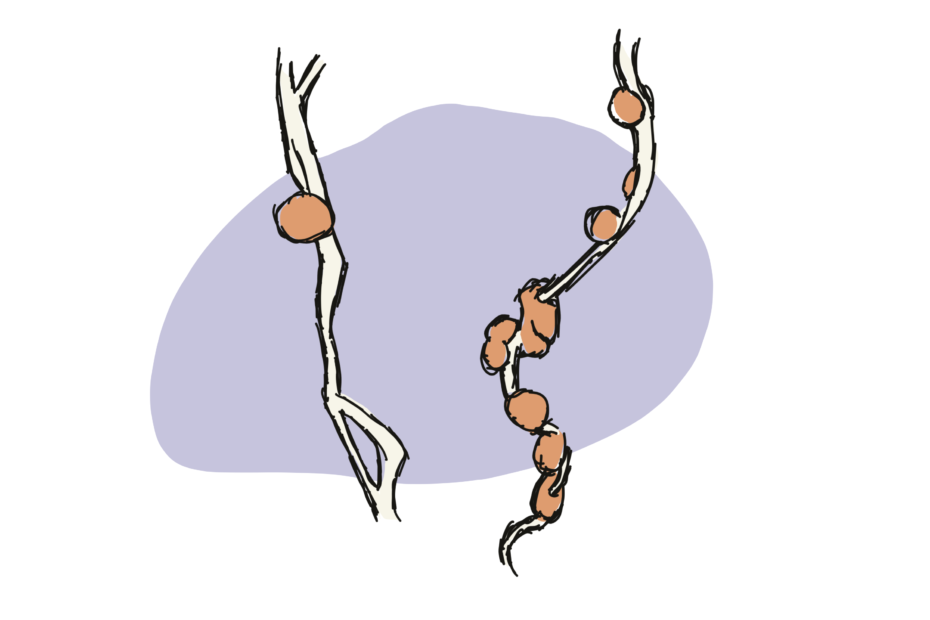 As a scientist who occasionally has to remember the names of genes and proteins, I’m always happy when other researchers come up with something both cute and logical.

This journal club is based on the paper “PLENTY, a hydroxyproline O-arabinosyltransferase, negatively regulates root nodule symbiosis in Lotus japonicus” by Yoro et al.

Legumes like L. japonicus are pretty special among the plant kingdom because they’ve worked out a way to get nitrogen from the air (N₂), and can thus live on nitrogen-poor soils where other plants would die. The trick of course, is that they don’t take the nitrogen themselves (they don’t know how to use N₂), but instead form a kind of trade agreement with rhizobial bacteria. The bacteria can take up N₂ and also know how to fix it into a more plant-digestible form. The rhizobial bacteria live in nodules (small bumps) formed on legume roots, and pass over the fixed nitrogen, in return getting some photosynthetically-gained carbon stocks from the plants. Symbiosis at its finest!

Of course, the relationship is only a win for the plant when nitrogen is limiting- otherwise they’re just giving away sugar for free. So L. japonicus and its legume friends have to carefully control how many of the bacteria-housing nodules they make.

The plenty mutant was first identified in 2010 (Yoshida et al.), as a L. japonicus mutant that made a whole lot of extra nodules.

As in ‘woah there legume, it’s time to stop making nodules. That’s plenty!’

But what does PLENTY do? Well, a recent study (Yoro et al., 2018) found that PLENTY is less of a ‘doer’ and more of a ‘controller’.  PLENTY is responsible for modifying, and thus activating, one or more  proteins (CLE-RS type proteins) that stops nodulation. So PLENTY is used to turn on the nodulation brakes.

Interestingly, the PLENTY process seems to act independently from a previously described nodulation signalling pathway that involves the CLE-RS proteins and a downstream protein, HAR1. Furthermore, PLENTY has a certain taste for modifying some, but not all of the CLES-RS proteins. So maybe PLENTY is mostly there to ‘fine-tune’ the off switch. It’s also possible that PLENTY spends at least some of its time doing something outside of this nodule-halting role. Given that the plenty mutant also has shorter roots, this may be a role in primary root growth.

Finally, as is often the case in plant science, PLENTY doesn’t come as a single gene, but rather as part of a set. L. japnoicus has two other genes (PLENTY2 and PLENTY3), that look to be related to PLENTY, and may have a similar, or overlapping function. So more studies are required.

But for now, that’s plenty.

You can read more about the PLENTY protein’s characterisation in a recent publication over at JXB:

Or read the original paper in which the phenotype was described: