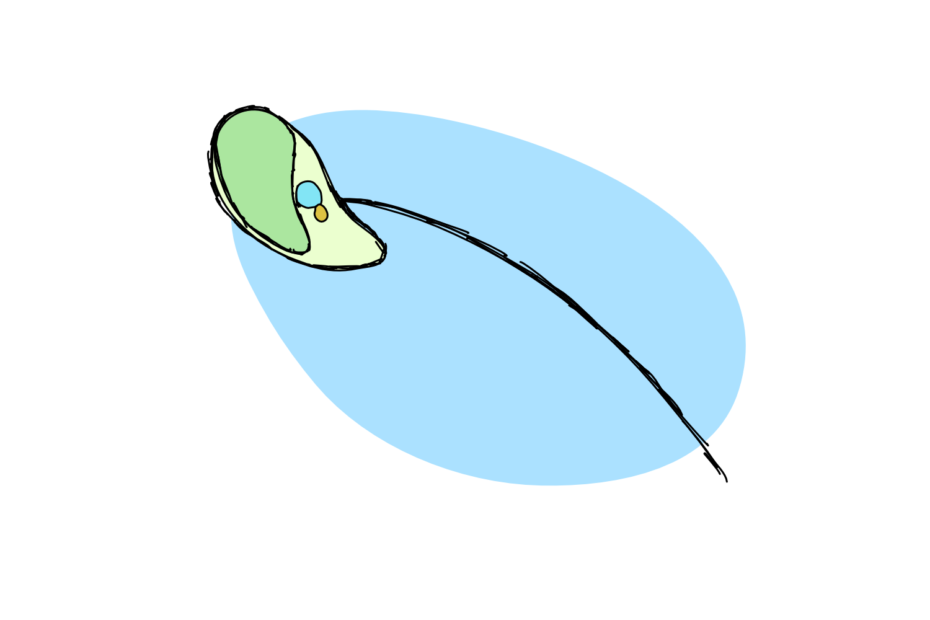 Small things are fun. That’s why they call tiny chocolate bars fun-sized. So we thought we’d look into the plant biology version of those shrunken-down candy bars: the fun-sized class of Mamiellophyceae.

We know that putting this one into the “plants” category might be a bit of a stretch, depending on your definition. Mamiellophyceae are a class of tiny algae that photosynthesise, and more specifically, that photosynthesise with a chloroplast they acquired by primary endosymbiosis. Both of these features are also important defining factors of Arabidopsis and friends*.

Mamiellophyceae contain many genera and they all have in common that they are smaller than what you usually find swimming in the ocean.

Being small is not that impressive on its own. Many bacteria are tiny: on average somewhere around 1 µm, which is about 250 times smaller than a grain of sand that we can barely see with the naked eye. To put that in perspective: if the grain of sand would be as long as a bendy bus, the bacterium would be the size of a coke can left in that bus.

Bacteria are fairly simple organisms: they are surrounded by a simple membrane, don’t have a nucleus or other true organelles and are essentially just very efficiently packed little containing water bags that float around and do stuff.

Plants, and green algae like Mamielleophyceae, are a bit more complex. Like all eukaryotes, they have a nucleus, mitochondria and some other organelles (even some forgotten ones). Plus, to protect themselves against the outside, they’re surrounded by a sugary cell wall (in plants- cellulose). All of these parts take a lot of space- the chloroplast alone is around 10 µm or more in plants like Arabidopsis– and each cell can have tens of them. And so plant cells are usually somewhere between 10 and 30 µm – roughly the size of a child in our imaginary bus.

Which brings us back to Mamiellophyceae: the eukaryotic photosynthetically active algae that somehow manage to stay the size of uncomplicated bacteria.

One Mamiellophyceae species, Ostreococcus tauri holds the tiny-ness record with a size of only 0.8 µm!

To pull this minuscule size off, the alga had to pack everything very, very efficiently.

Aside from its nucleus, O. tauri contains a single mitochondrion, a single tiny chloroplast, and a single Golgi body. To save space, O. tauri got rid of a cell wall and its genome is only a sixth of the size of Arabidopsis (20 Mb vs 135 Mb). Everything about O. tauri helps to live a small life.

Despite it’s tiny size, O. tauri is pretty strong. It can grow in nutrient-poor waters, like in the Arctic, and provide a valuable source of carbon for other organisms in the ecosystem. In a very dynamic system of growing- snacking on prokaryotes and being killed or eaten by viruses and other enemies. As such photosynthetic picoplankton (the category of very small organisms that O. tauri and friends fall into) play an important role in fixing solar energy. Interestingly, the total biomass of picoplankton remains fairly constant over time – a well equilibrated system.

It would be easy to simply dismiss the Mamiellophyceae as freaks of nature. They’re small, so what? But it turns out that studying them might yield new properties that can be used to improve our favourite plant species.

Micromonas pusilla, another tiny alga, contains enzymes for basic functions that are more resistant to detergents and heat. These kinds of enzymes can be very useful in technical or research applications – think of the Taq polymerase that survives 94 °C and allows us to perform PCR reactions.

In addition, M. pusilla contains some specialised enzymatic activity, that allows them to efficiently produce polyunsaturated fats – something we humans crave for a healthy diet. While M. pusilla was already discovered in the 50s, it’s only been studied for some 20 years, with a lot of the previous research revolving around questions like genome evolution and its relationship to other picoplankton. So we’re exited to see which understandings future research will bring!

Unlike the members of Mamiellophyceae, research in this field will continue to grow in size. Understanding a minimal system is incredibly valuable when it comes to designing artificial systems from scratch.

‘Plants’ come in all shapes and sizes – some of them even fun-sized.

*Please forgive me for constantly calling algae plants. There are some differences between the two, but to me, if it photosynthesizes like a plant and is a eukaryote like a plant, it’s a duck plant. In reality, plants are actually a type of green algae. If we look at the evolutionary relationships between all the green photosynthesising things, plants are just a subtype of different things we call algae!

Monier, A., Worden, A. Z., & Richards, T. A. (2016). Phylogenetic diversity and biogeography of the Mamiellophyceae lineage of eukaryotic phytoplankton across the oceans. Environmental Microbiology Reports, 8(4), 461–469.