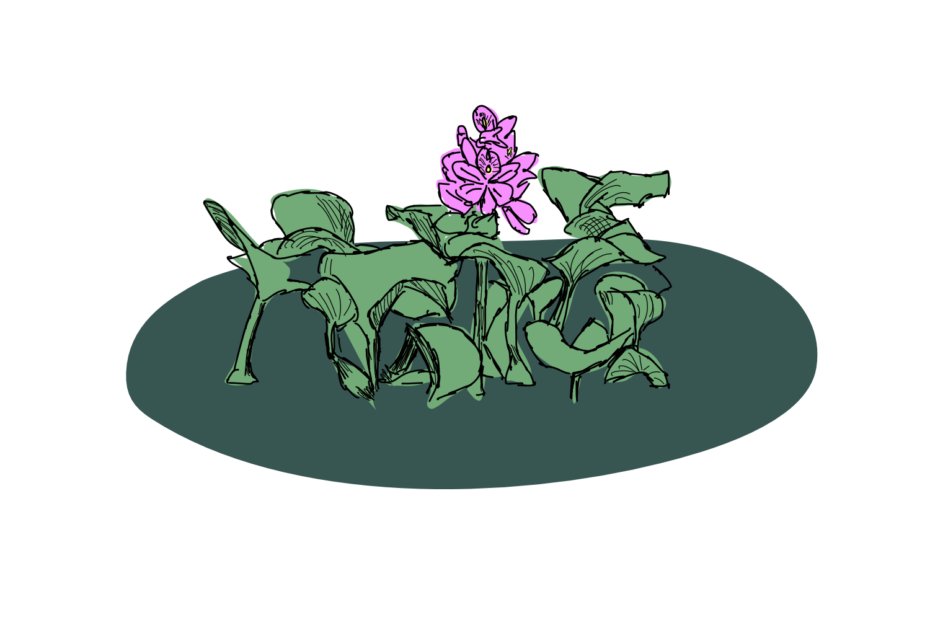 In 1884, during the Cotton State Exhibition in the United States, well-meaning presenters handed out small plants to visitors. Those visitors brought the gifts to their backyards where they excitedly planted the aquatic planted in small streams and ponds. Just 16 years later, the plant had become a serious pest in many bodies of water in several federal states.

The responsible plant is Eichhornia crassipes, which is also known as water hyacinth due to its prominent purple, hyacinth-like flower. Water hyacinths are excellent at floating due to their petiole- a large spongy bulb at the base of the stem. Like a biological flotation device the inflated petiole keeps the plant on the water surface.

I’ve seen water hyacinths -safely isolated in the botanical garden in Berlin- and to be honest: it doesn’t look that remarkable. The leaves are approximately hand sized and come in standard-green. What makes Eichhornia crassipes remarkable though is its growth rate.

Water hyacinth has earned a bad reputation for overgrowing bodies of water very quickly. The most infamous example is the Victoria lake in Rwanda which has almost completely fallen victim to the aquatic plant.

The effects are devastating for economy and ecology. Water hyacinth grows to cover the entire surface of a body of water, blocking light from reaching other aquatic plants below. While their roots can be a source of food for some fish, when the plants die the decay process removes oxygen from the water, suffocating all animal life. For the people living in the area, this doesn’t just remove a source of income from fishing, but also renders the waterways almost impenetrable for their boats.

Water hyacinth originate in South America, where they integrate into an ecosystem that includes herbivorous insects and other natural controls for their overeager growth. As it is so often the case, globalisation and human travel brought plant material from South America into the world and today the plant can be found in North America, South-East Asia, several African countries and in Europe. Wherever the growth conditions match – the plant thrives in temperatures between 12 and 35 °C – water hyacinth just grows and grows. Its biomass has been reported to double within two weeks with individual shoots growing up to 5 m per day.

A big advantage for E. crassipes is its dual mode of reproduction. A single flower produces several thousand seeds that sink to the ground and can stay viable for 30 years. But in addition to sexual reproduction, the water hyacinth also reproduces through fragmentation: parts of the plant break off when agitated by waves or other mechanical stress and a whole new plant can grow from the pieces.

Understandably, most research on water hyacinth is currently looking for ways to efficiently decimate it. While chemical treatments such as glyphosate and 2,4-D are effective, their use in bodies of water is highly problematic. The most commonly used method is mechanical destruction and removal, but given the plant’s ability to regrow from fragments this approach often falls short.

Biological control works in the original habitats of water hyacinth. A number of insects feeds on the plant. Bringing these insects to other ecosystems however can have massive downstream effects – it’s never clear what other (native and vulnerable) species might also be the target of hungry introduced insects.

A special type of biological pest control was proposed in 1910: some people wanted to introduce hippopotamus to the USA which would feed on water hyacinth and provide meat for consumption. The proposal fell through with one vote, most likely due to issues with postal communication. In hindsight, given the known danger of hungry hungry hippos, this seems like a very lucky coincidence.

So is there any good side to this feral flora? Well, the overwhelmingly fast growth of water hyacinth might also be a valuable resource. Biogas might become more and more important the more we get away from fossil fuels and a fast growing plant could fit right into modern energy systems. Today, only small pilot projects use water hyacinth as an input crop for biogas refineries. Scaling up is limited by an efficient harvesting system and the high water content of the plant which makes the drying process energy intensive. With a bit of research however, the potential of water hyacinth as a biomass plant might be fully capitalised on.

On top of this, there are a couple of of other interesting properties like capabilities in bioremediation or use of water hyacinth as a food source that I won’t get into right now. Another thing I couldn’t figure out is the molecular basis for the incredibly fast growth. Understanding the molecular make up of fast growing plants might help to engineer other crops in the future. So, if you know more about why water hyacinth is so amazing at growing, let me know! I’m eager to learn more.

After reading up on all these facts I obviously wanted to have my own water hyacinth growing in a pot of water. (Un)fortunately, selling of the plant is prohibited in the EU. It’s probably a good idea not to have a new generation of unknowing plant lovers growing water hyacinth in their backyards.

The wikipedia entry is extensive and a good read.

What is water hyacinth?

Seven things you did not know about water hyacinth