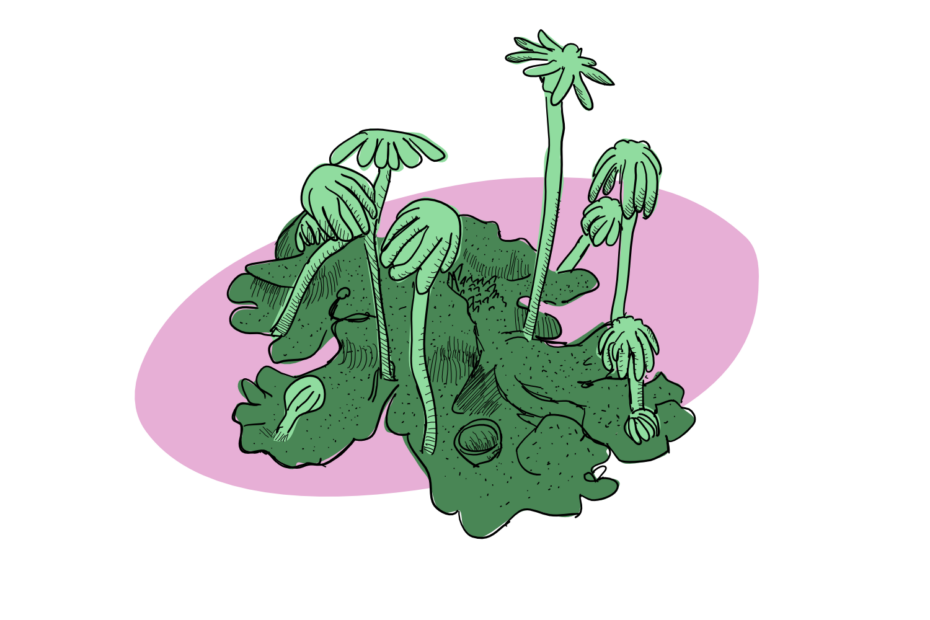 Serendipitous discoveries are my favourite reoccurring tale in biological research. You may have  heard about Alexander Fleming, the 20th century microbiologist who left some bacteria on open plates with growth medium overnight only to find them in the morning being killed by a strange fungus. Thus Penicillium (and its product penicillin) was discovered.

Despite our desire to eliminate coincidence from our research in order to create robust and reproducible data, it sometimes is this touch of randomness that leads to the most exciting discoveries. Who would have thought that a broken growth chamber could lead to the discovery of a new function of a regulatory molecule, dating back to the time before plants conquered land?

Scientist Isabel Monte works on the liverwort Marchantia polymorpha (because there is no such thing as mar-can’t-ia), a non-vascular plant that is used by many as a model organism. On a particularly hot summer day in her lab in Madrid, Isabel discovered that her growth chamber had stopped cooling its contents. Instead of 21 °C, the chamber’s thermometer reading had climbed up to 38 °C, far too hot for the liverworts inside.

“I checked the registry of the chamber, but I couldn’t figure out how many days it had been like that. I saw that all my plants were dead, except the ones growing on an OPDA plate”, Isabel recalls. She was studying the signalling molecule OPDA and its corresponding receptor COI1 in Marchantia. Isabel added OPDA to the growth medium of wildtype plants growing side by side with plants that had a broken receptor COI1.

COI1 is involved in plant defence, development and fertility, and is activated by dinor-OPDA, as Isabel and her colleagues had just published in 2018. Dinor-OPDA is synthesised from OPDA, the molecule Isabel added to the plates. COI1 and dinor-OPDA work like lock and key, with COI1 being the lock and dinor-OPDA presenting itself as the fitting key.

Both the COI1 receptor and dinor-OPDA are not only found in the liverwort Marchantia but in all plants, including Arabidopsis. Arabidopsis represents the angiosperms, a large group of plants that also includes many of our crop species. In angiosperms, there has been a small addition to the lock and key system found in Marchantia: a second key to fit the same lock. During its evolution, Arabidopsis had extended its signalling molecule library to include jasmonate isoleucine (JA-Ile) which can also bind COI1. Marchantia doesn’t produce JA-Ile and in turn its version of COI1 can’t bind to it. As it turns out, it required only a single amino acid exchange in COI1 during its evolution to allow it to bind both dinor-OPDA and JA-Ile. “The most surprising findings were the identification of a new hormone (dinor-OPDA) in Marchantia and the fact that one single amino acid change in COI1 could discriminate between the ligand from Marchantia (dinor-OPDA) and the ligand from Arabidopsis (JA-Ile). It was really mindblowing!”

That fateful morning, Isabel wanted to test the link between COI1 and OPDA. She destroyed the gene for COI1 and grew these plants in the growth chambers. Without COI1, the knockout plants are “blind” to OPDA as they have the key (supplied from the growth medium), but not the lock to put it into. When the cooling systems broke down, the resulting inadvertent heat shock killed all plants – well, except those few grown on OPDA. Looking back at their transcriptome data from the 2018 study, Isabel and her colleagues could find indications that wildtype plants exposed to OPDA increased the production of heat shock proteins – and could therefore survive the heat.

The biggest surprise was yet to come. Among the survivors were also the COI1 knockouts, the ones that should be blind to OPDA. Yet, they were just as protected as the wildtype plants with a functioning COI1. This could only mean that there is an alternative pathway independent of COI1! Isabel was excited to find support for an older hypothesis: “A COI1-independent role of OPDA had been previously proposed in Arabidopsis, but those articles didn’t provide enough evidence for that.” In her chosen system, Marchantia, she could find the missing evidence.

Choosing Marchantia polymorpha turned out to be the right decision. Liverworts (which are part of a group called bryophytes, which also includes mosses) belong to the earliest land plants and are the most distant from flowering plants on an evolutionary timescale (the only “plants” even more distantly related are found in the water where we call them algae). Due to their evolutionary history, liverworts are a powerful tool to study the conservation of molecular pathways and cellular function during plant evolution. “Everything that is shared between Marchantia and Arabidopsis is likely shared by all the other plants species in between these two, and moreover, it’s very likely that the common ancestor of all land plants also exhibited this common feature”, Isabel explains.

Being curious, Isabel went even further back on the evolutionary timescale and analysed the green alga genus Klebsormidium. This particular fellow can synthesize OPDA, but contains no trace of COI1. “Another exciting moment was when I demonstrated that OPDA had a protective effect against heat shock on the alga Klebsormidium, which meant that the role of OPDA in thermotolerance predates both the evolution of COI1 and land plant colonisation!”

It was the combination of working in green algae, mosses and flowering plants that allowed Isabel and her colleagues to uncover the role of OPDA. To Isabel, this movement away from the standard model Arabidopsis is crucial: “If we stick to angiosperm model systems, we lose the evolutionary perspective gained with early-divergent model organisms like Marchantia or Klebsormidium. Ideally, we would need to establish even more model systems to have a complete picture of plant evolution, but with Marchantia and charophyte algae (not only Klebsormidium), we are already expanding our knowledge beyond the Arabidopsis-centered research.”

The discovery of the role of OPDA in thermotolerance has a huge potential for crop improvement. Although it is still very early days (a favourite statement of anyone doing basic research), OPDA could help to increase the resistance against heat stress. “We should study the impact of temperature increase on OPDA accumulation,” Isabel explains. “We have to figure out how we could express OPDA from within the plants at the right time and place”, she continued. We are not there yet, though. “The application of the knowledge on OPDA signalling to crops will require additional mechanistic insights before we can actually engineer plants to become more resistant to heat stress.”

There is a very encouraging message in Isabel’s story. Next time a piece of equipment breaks down, don’t just throw everything away and shed a tear for the time you lost. Instead, have a look at what happened and whether there is something exciting to be learned. It is the nature of coincidental discoveries to arrive unexpected.

A big thanks to Isabel Monte who kindly agreed to answer my questions.