Mushroom Diet: The Orchids who give up Photosynthesis 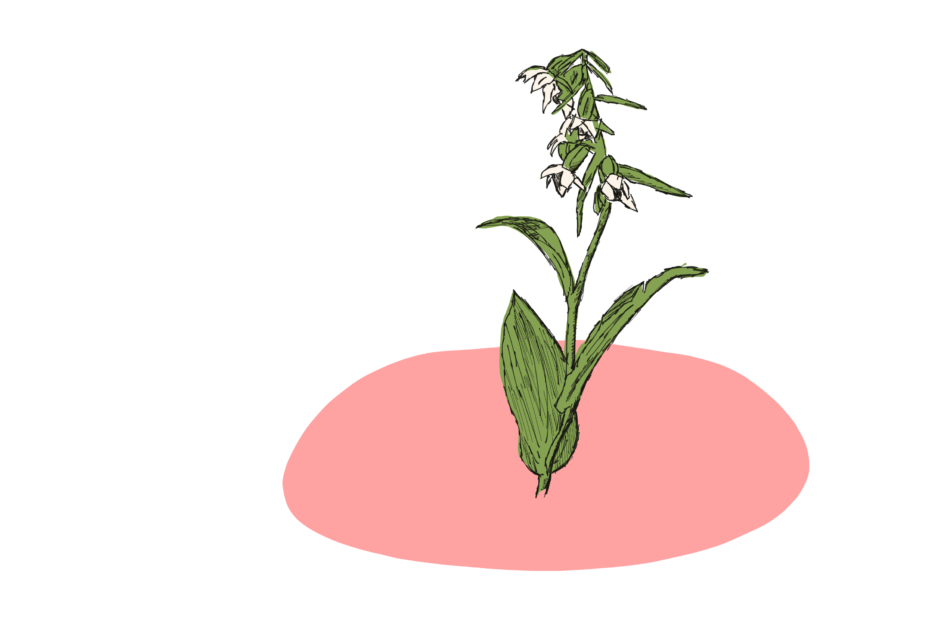 When we think of plants we tend to make certain assumptions. Green, for starters. Photosynthesising, for sure. But some plants have decided to throw it all away, and act like the animals do. Meet Epipactis helleborine, an orchid species that sometimes lives entirely on a diet of mushrooms.

It’s not just animals who place pride in their parenting. When plants send the next generation- their seeds- off to a new life, they tend to pack some snacks for the journey. Oils (such as those in the seeds of canola, sunflower or Arabidopsis), starch (corn), and sugars (most fruits), help feed the young as they make their way through those tricky teenage years.

But members of the Orchidaceae family don’t gift their young with food. Instead, their tiny seeds are filled with information: knowledge of how to make rich friends. Germination of these species relies on their seeds finding fungal friends, and munching on a mushroomy supply of carbohydrates until they reach a level of (photosynthetic) maturity. Once mature, the orchids can repay the fungi with photosynthetically acquired carbon.

Of course, sometimes habits aren’t so easy to shake. Although the majority of orchids grow up green, and therefore capable of making their own carbon, quite a few species continue to supplement their diet with fungal nutrients (carbon, but also nitrogen, phosphorous and even water), well into adulthood. This mushroom munching, known as mycoheterotrophy, might be one of the tricks that allows orchids to colonise the darker corners of the world where only a little light leaks in, such as the rainforest understorey.

A particularly beautiful example of this full mycoheterotrophy is seen in Epipactis helleborine, a fairly common orchid species. While most individuals of the species are green mixotrophs, every now and then, a completely albino plant will pop up.

These plants are not just visually beautiful, but also scientifically so. Comparing full mycoheterotroph vs. mixotroph individuals within the same species allows us to better understand the specific changes that lead to, or result from, these very different life choices.

Several years ago, a group of scientists (Suetsugu et al., 2017) examined how albino and green E. helleborine differ in the expression of genes in their roots- the point of connection with the fungi. They found that albino plants had higher levels of antioxidant-related transcripts (possibly to combat the real physical stress of constantly consuming their fungal should-be symbiont), and that certain genes involved in transporting things like sugars were higher. But apart from that, the two were surprisingly similar. This suggests that once plants have found a reliable mushroom, going from ‘casual’ to ‘all in’ might not be such a big leap.

A more recent study (Lallemand et al., 2019) looked instead to the orchid leaves, and investigated not only gene expression, but also the accumulation of metabolites, things like amino acids and sugars. They also included two new orchid species Cephalanthera damasonium, and E. helleborine’s cousin and E. purpurata in their studies. Overall, they found that ‘becoming albino’ was marked by certain similar traits, conserved across all three species. As expected, this included deceased expression of photosynthesis-related genes, and increases in the expression of both tools to get fungal nutrients into the plant (transporters) and to break down these nutrients and to be made into something new.

So what does it all mean for the plants? Well, the scientists couldn’t help but notice that the metabolic patterns they observed looked a lot like those seen in plants undergoing starvation. Perhaps unsurprisingly, albino plants tend to be shorter, have thinner leaves, have a lower basal metabolism, and can sometimes succumb to (starvation-related) necrosis.

Even if these individuals do manage to feed themselves sufficiently, albino plants have a higher risk of being eaten themselves. Albino plants are more easily spotted by herbivours (they don’t really ‘blend in’), and the low-complexity metabolites that build up in their leaves make them the perfect snack. And finally, even if the plants make it all the way to reproductive maturity, they make less flowers, and produces less seeds.

So, although partial mycoheterotrophy might be a winning strategy for orchids at the beginning of their life cycle, turning full mycoheterotroph means they won’t have as many kids of their own. For these orchids at least, a diet of only mushrooms is not the healthy option, and mixotrophy is the spice of life!

This article is based largely on two publications: