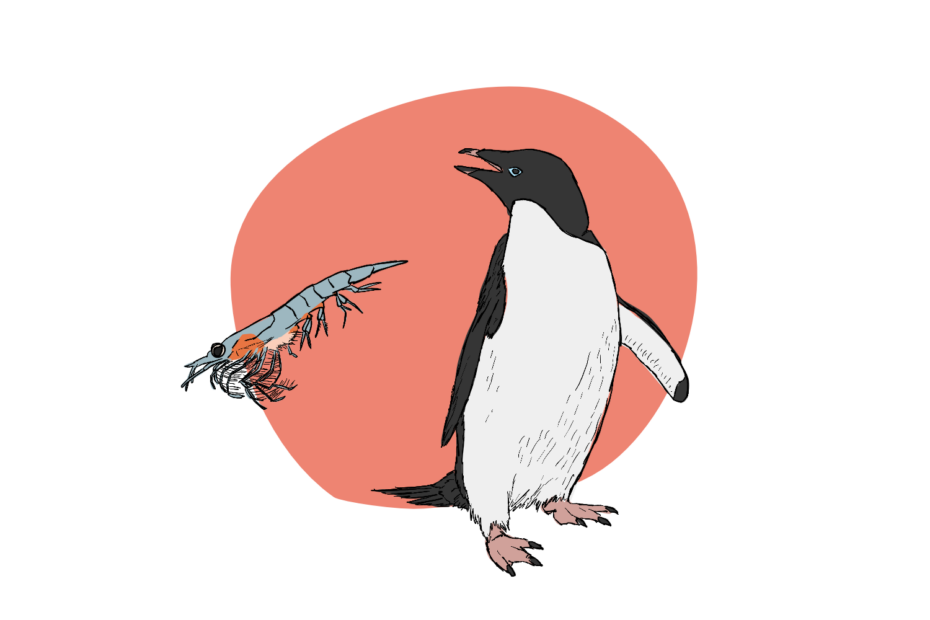 Penguin poop, as it turns out is pink.

And I need you all to know that – despite what several sources might say- the reason it’s pink, isn’t because of the krill (little sea crustaceans) that they eat.

At least not directly.

Penguin poop is pink because penguins eat krill and krill are pinkish. But krill themselves are pink because they eat phytoplankton: tiny marine algae.

Ultimately, the pink colouration comes from certain pigments called carotenoids. Carotenoids are colourful compounds made by plants, algae, some fungi and some bacteria- but not by krill, penguins or, for that matter, humans. While animals can exploit carotenoids, modifying the ones we eat (i.e. steal from plant) and even incorporating them into their bodies, they can’t make them. As the name suggests, carotenoids are roughly carrot coloured, tending to range from yellow, through orange, to red. And they’re all around us. Carotenoids give colour to carrots, daisies, papayas, pumpkins, grapefruits and tomatoes. As well as flamingos, salmon, and penguin poop.

For these latter three, the specific pinkish colour is a)originally made by non-animal organisms, and b) due to a specific carotenoid named astaxanthin. We’ve written about astaxanthin before on the blog.

Anyway, the pink colour of penguin poop has two cool facts associated with it (apart from the obvious fact that it is pink poop you guys). Firstly, the intensity of pink in the poop might actually be able tell us something about what stage of their breeding cycles the penguins are in. This is because penguin diets (at least the diets of the Pygoscelis genus penguins, Adelie, gentoo and chinstrap) change with time, ‘pinking up’ as their diet becomes more and more krill based throughout the season. Tracking penguin breeding timing might be increasingly important to understand- global climate change is rapidly altering the timing of natural events (think springtime leaf burst, animal hibernation etc.), which can have pretty terrible implications for the organisms involved.

The second, even cooler fact, is that the pink colour allows penguin colonies to be seen from space. Pink, as it turns out, is not overly present in the Antarctic, and nicely shines out against the white and darks of snow and rocks. Unlike a penguin itself. A 2009 study showed that guano (a nice way of saying poop) staining could be visualised by satellite, allowing the discovery of new penguin colonies in particularly remote location.

And all of it thanks to photosynthesisers!