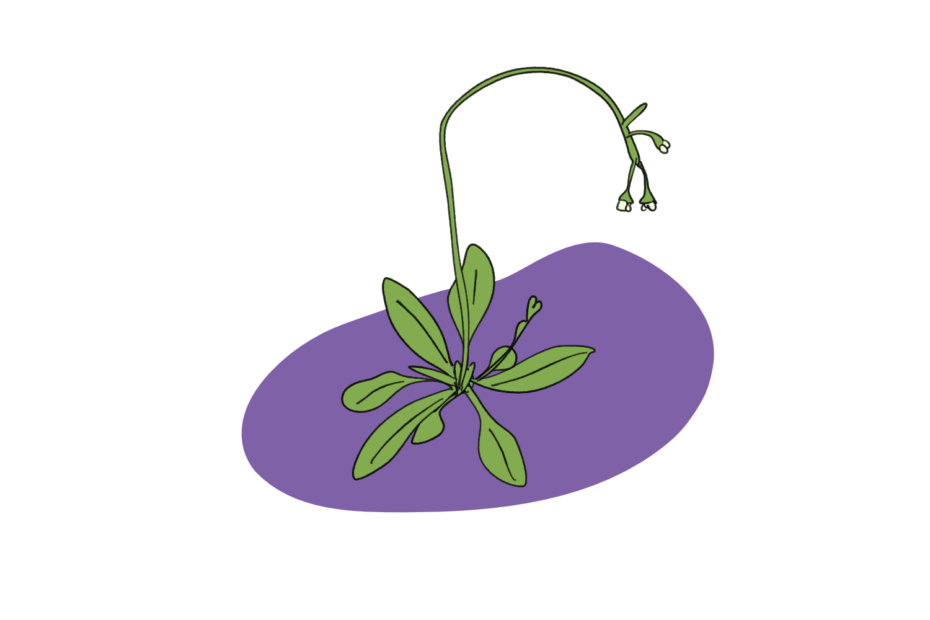 You already know that plant scientists like to do some pretty cruel things to plants. We cut out bits out of their genes, steal their metabolites to try to fix our problems, lock their cells into tiny droplets of oil… the list goes on.

But now, new research suggests that plant scientists cause plants a whole lot of stress, just by growing them.

In the wild, plants tend to grow on soil. So, in the lab, plant scientists often try to replicate this- lining up trays and trays of Arabidopsis in tiny pots, or building exaggerated molehills for our potato plants. But just as often, we grow our plants in more artificial conditions. We pour gelatinous nutrient media into petri dishes (aka ‘plates’) of various sizes, and then sprinkle a dusting of our favourite seeds onto the solidified surface.

This growth-on-jelly situation is an obligatory part of many protocols, meaning that we can’t complete the science without growing the plants, at least for a little while, on plates.

But it’s also just plain old convenient. Plate plants generally take up less space than soil grown plants, and plate growth is a good way to get a lot of plant tissue quickly. Plus, that tissue doesn’t come with soil, and soil microorganisms, attached.

Perhaps most importantly, this kind of growth is very adaptable. For example, the plates can easily be placed in the dark to study etiolation, or grown vertically to look at root length or study gravitropism. And things can be added, or even taken away from the media, allowing us to study plant responses to having too little or too much sugar, salt, hormones or heavy metals.

In the end, there’s a bunch of reasons why we should grow plants on plates.

But now there’s also a few reasons… let’s say 700 of them.. that suggest that there might be some problems with the way that we currently do things.

That 700 is the number of genes that were deferentially expressed between populations of Arabidopsis plants, both grown on plates, but set up in slightly different ways. You see, once the seeds are safely tucked in, the plates have to be sealed up, in order to both prevent too much water from getting out, and to keep the nasties- like fungi- from getting in. Two popular methods for sealing are to use parafilm- a kind of stretchy wax, and to use sticky paper tape, which basically resembles thinner, less colourful washi tape. After just one week of growth in this two conditions- parafilm or paper, the little arabidopsis seedlings look the same. But inside, 700 things (genes) were different.

Overall, these genes pointed to the fact that the parafilm plants were pretty unpleased. These plants had lower expression of genes involved in nutrient responses and growth promoting hormones, but were pumping out a whole lot of proteins that would help them deal with stressful situations.

The scientists tracked the plants, and noticed that by two weeks, the parafilm plantlings had less biomass, lower chlorophyll content, and less healthy roots than the paper-protected plants. By three weeks, things looked even worse for the wax-wrapped group.

The two populations had no difference in water content within their plate environments, but there were some changes in the pH of the media, the amount of hydrogen peroxide, and the concentrations of oxygen and carbon dioxide- all factors that can influence plant growth. And that can likely contribute to those different gene expressions found in the first week of growth.

The authors point out that having stressed plants can lead to some pretty wrong scientific conclusions, and can cover up or exaggerate real phenotypes that might be present for certain mutants or certain conditions.

But probably what was most interesting about the finding was that, although the two populations of plants looked more different with time, their gene expression data looked less different. At two weeks, the number of deferentially expressed genes had dropped from 700 to 490, and by three weeks it had gone down to 10.

This is pretty important, because, at the end of the day, most plants scientists already know that plants on plates can get a bit stressed. But we still have a tendency to use ‘they don’t look too bad’ a a judge of just how happy a plant really is. In this case, the plants that looked the same- parafilm and paper after 1 week- were actually hugely different at the gene level.

Which I guess just brings us back to the old ‘don’t judge a book by it’s cover’. Sooo… ‘don’t judge a plant by it’s physical phenotype that’s visible to the naked eye’? I’m sure you can all do better than that. Let me know in the comments!

This article is based on the recent publication:

We thank Vanessa L. for bringing it to our attention.