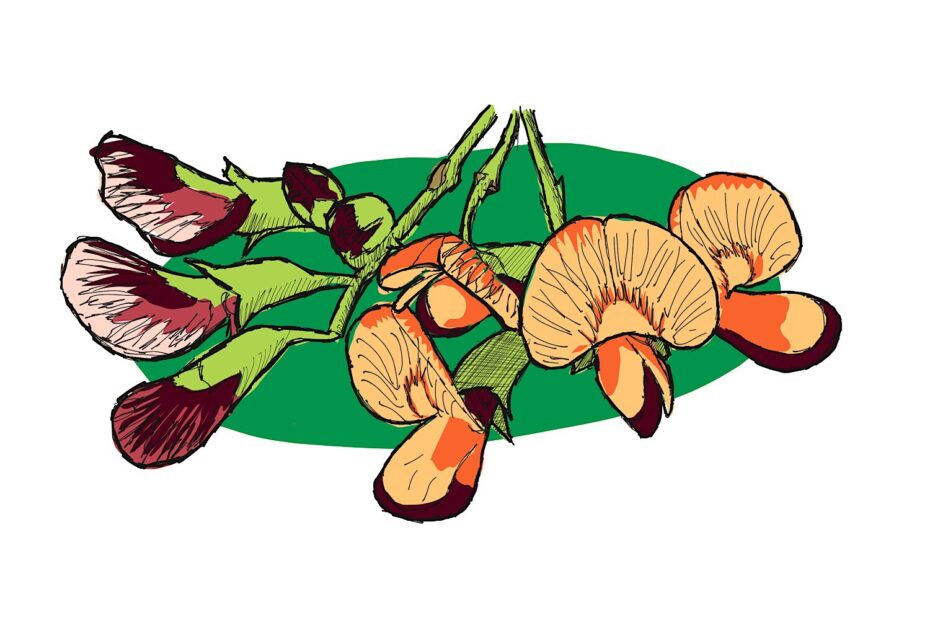 The synthetic poison 1080 (pronounced ten eighty), is used widely in Australia and New Zealand to control the population of feral animals that threaten local species with extinction. While 1080 is fatal to feral fauna, the scientific magic of it, is that many native species can snack on the substance without any harm. All because of some peas, their poison, and a plant v. herbivore arms race.

Please note that this article discusses the deliberate poisoning of animals.

1080 is a synthetic poison that is lethal to mammals in fairly small doses. Upon digestion, the active ingredient, sodium fluroacetate, is taken into the cells’ mitochondria, where it disrupts the citric acid cycle, a metabolic pathway required for cellular respiration. The animal rapidly becomes unconscious, and soon dies.

The poison is used widely in both New Zealand and Australia, to kill invasive species including rabbits, foxes, wild dogs and feral pigs.

Less than 250 years ago, Europeans came to Australia, bringing with them a host of exotic creatures. These creatures rapidly ravaged the native populations by competing for food sources, destroying habitats, or simply by eating the locals creatures. In total, a predicted 24 bird species, 7 frogs and 27 mammal species have become extinct, and many more are likely to follow. New Zealand has similarly seen many extinctions, but primarily of bird species -they don’t really do mammals over there.

These threatened species are unique, found only in their native lands, and their disappearance from these countries means loss from the world forever.

So the governments of Australia and New Zealand have worked to find a way to control the introduced species, without harming the already-threatened natives. And in 1080, they’ve found a useful tool. Since the 50s, baits laced with 1080 have been used to control the number of various feral foes.

So how do native species avoid getting caught in the crossfire?

In some cases, it’s simply about they type of animal that lives in an area. 1080 is perhaps most widely used in New Zealand. That’s because, when New Zealand made mammals it only managed to evolve a couple of species of bats, and bats don’t tend to eat poisoned bait. But the multitude of introduced mammal pests- rats, stoats, deer and rabbits- do. 1080 also has different effects of different organisms. While canids (dogs/foxes) are highly sensitive to 1080, and herbivore and birds are considered somewhat sensitive, reptiles amphibians and aquatic fauna are largely resistant.

In other cases, the survival comes down to behaviour. For example, large, buried bait may be readily excavated and eaten by scavenging wild dogs and foxes, but (largely) ignored by small insectivores.

But in some cases, survival comes down to Science. Particularly, the Science of Herbivory War.

Or, if you are a particular determined plant, you take it one step further, and go full poison mode.

Gastrolobium is a genus of flowering plants belonging to the pea family (Fabaceae). Gastrolobium species grow mainly in the south west of the Australian state Western Australia. The soil in this region is pretty harsh, containing very little of the minerals phosphorous, nitrogen and also lacking water. So plants have to put a lot of effort in just to survive. To protect their hard-earned growth, Gastrolobium species also work hard to produce a little bit of poison-potassium fluroacetate. A compound that has all the same properties as that active ingredient of 1080- sodium fluroacetate.

The problem for the poison peas, is co-evolution. Life is a constant arms race: when prey get faster, predators have to co-evolve to be smarter or bigger, in order to survive.

So while poison peas built up their fluroacetate stocks, the species that snacked on them simply grew to like the taste (or at least, to not get poisoned).

Fast forward a few million years, and you’ve got yourself some pretty hardy herbivores. And a kind of selective survival, in the face of 1080, which might just be a key to saving these unique native species.

*For the sake of scientific accuracy we want to note that not all native animals are resistant to 1080. Resistance is more common in Western Australia (where the peas mostly are). Furthermore, although 1080 is considered to target mammals, it can also kill birds, and some species are particularly at risk- for example the omnivorous and curious New Zealand Kea (a ground parrot). So care has to be taken when baiting, and, as is often the case with these things, the benefits have to be weighed up against the costs.

A lot of info from here, including the effects of the poison and some comments on the success of 1080 as a poison.

1 thought on “Poison Peas and the Australian Arms Race”