These two genes help rice to keep its head above water 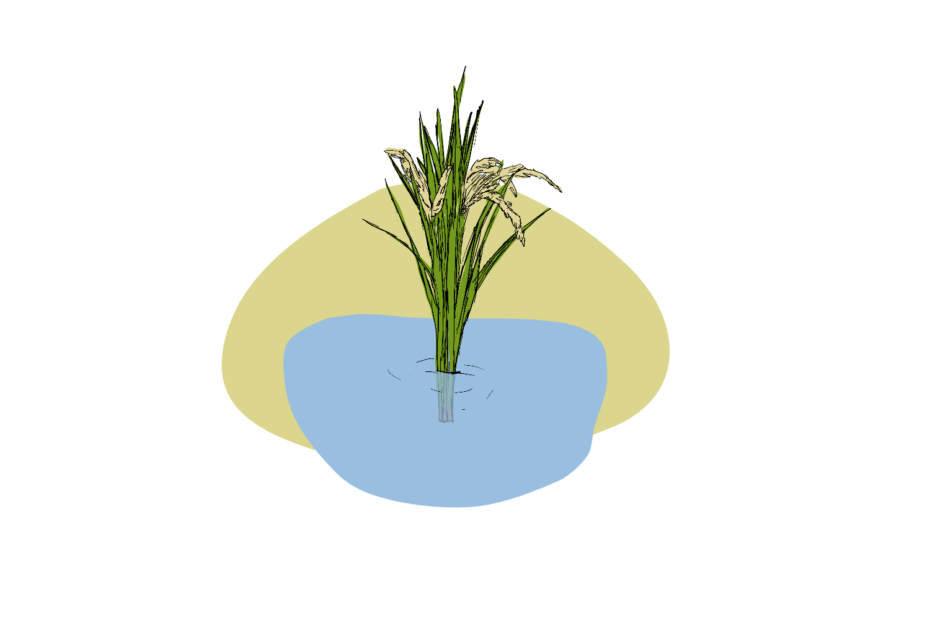 Think about any crop plant and what of it is important to you. You might say taste, fruit size, yield per acre – but would you consider plant height? Maybe you should! Researchers have discovered two new genes that react to flooding and control the height of rice plants – so that they don’t drown.

The height of crop plants is an extremely important trait. If wheat grows too tall, rain and wind are more likely to weigh it down, breaking the stems and destroying the harvest. Rice plants, which stand all day in water, have a high incentive to poke their heads out above the water level. Corn can collapse under its own weight if it grows  too tall.

That’s why breeders take great care in fine-tuning the height of the crops plants they develop. They often follow changes in the demands of their clients. Some 150 years ago, straw was an important commodity to feed horses, so wheat was grown tall so that both grain and straw could be harvested. With the advent of motorised vehicles, the demand for straw dropped significantly, and so did the desired height of the wheat grown on the fields. A part of the Green Revolutions – a major agricultural revolution of the 50s and 60s that involved transformation of the world’s crops – involved manipulating their height.

Over many decades, breeders developed shorter, more uniform plants, which had the joint benefits of making the plants less likely to lodge (fall over), and simultaneously made them easy to harvest by tractor. Importantly, these shorter plants also put less energy into growing tall, and therefore had more energy available to put into the development of thick and juicy grains.

Rice faces also faces height-related challenges. Unlike wheat, it is often grown on inundated fields. Getting wet feet is not a big issue for rice – as long as the water remains at the feet. If the water level rises to the figurative knees of the plant, only a few tolerant varieties survive while others drown.

Usually, it is the farmer who controls how much water is in a rice field. Unfortunately, due to the Human Made Climate Crisis, extreme weather events that lead to floods become more likely every year. In over-flooded rice fields, plants die and the year’s harvest is destroyed. Taller rice plants can be a way to more flood-resilient rice varieties.

For years, researchers worked on understanding the molecular mechanisms behind rice height. A common target is the plant hormone gibberelic acid. It is involved in many cellular processes, including the control of vertical growth.

Gibberelic acid is active in the stem of rice plants, where it controls the growth of the internodes – the characteristic segments found on rice and other grass-like plants. Keisuke Nagai and colleagues investigated different rice varieties with shorter or longer internodes and in search of the the molecular mechanism defining plant height. They used two rice varieties, a tall one found in deepwater and a short one growing in shallow-water.

The researchers found two genes that had an important effect on the plant height. The first gene product, ACE1, accelerated the growth of the internodes – but only when the plants were flooded. While the exact molecular function of the protein ACE1 remains to be uncovered, the researchers could show its effects in the plant. In deepwater rice, ACE1 helps the plant to grow taller than the water level, and therefore to survive. Rice varieties that are bred to grow in shallow-water carry a mutation in the ACE1 gene which blocks the response to flooding. When faced with flooding, the shorter plants drown.

The flooding of rice plants also had an important effect on the second gene identified in the study. DEC1 acts like a brake on internode growth, a brake that is lifted in deepwater rice when the field is flooded. Without the brake, and with the help of ACE1, deepwater rice emerges from the waters. In contrast, in shallow-water rice, the brake DEC1 stays active during flooding, stopping plant growth.

Finding two new genes that control plant height is pretty cool. What’s even cooler is finding two genes that are responsive to a relevant environmental trigger, like flooding. This makes sure that the plant only spends additional energy on growing taller when it is faced with the threat of being overflooded. Under regular, shallow water conditions the plant has more spare energy to spend on rice grains.

ACE1 and DEC1 are antagonists. By fine-tuning their expression, some rice plants evolved to outgrow a flood when needed. Now it is up to breeders to use that knowledge to actively select (or even genetically modify) the ACE1 and DEC1 genes in rice to adapt local varieties to changes in the environment. And it’s not only rice that might benefit. The two genes are also found in the crops sugarcane and barley, and in the model grass Brachypodium distachyon. While it definitely requires further studies, it might be possible to use the knowledge about ACE1 and DEC1 to change the height of several crop plants and therefore render them more resistant to wind, rain, or flood.