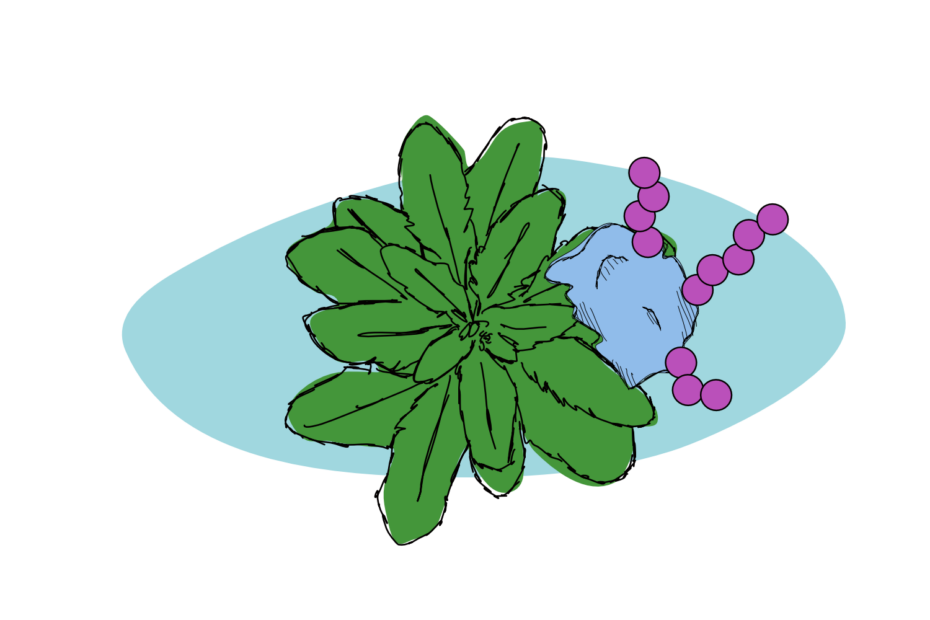 It’s grey and rainy days like this November in Berlin that make you very aware of your immune system and how it works, perhaps not always successfully, to fends off all kinds of pathogens. Plants are in a similar situation, their immune response has to constantly be ready to fight off fungi, bacteria or viruses. Recently, researchers gained new understanding of the workings of a key part of the plant’s immune response.

Plants don’t have an immune system like we do. They lack the T-, B-, NK- and other cells that identify, process and kill invading bugs. Instead, plants makes life for pathogenic microorganisms much less fun by producing reactive oxygen species that oxidise and damage the invading bugs. Or sometimes, a plant will go so far as to even downright kill parts of itself so that the pathogen can’t spread to the rest of the system.

While effective, the radical approach taken in the plant world comes at a great risk of self-harm and an energy cost to the plant. Overshooting on an immune reaction could lead to plant death – which is even more of a shame if the reaction was triggered by a false alarm. That’s why plants control their immune response very tightly so that only true alarms trigger all the death and destruction necessary to survive an infection.

A true incoming infection is sensed by specific receptors in the plant and their response leads to the accumulation of salicylic acid, a major plant hormone. Salicylic acid in turn activates a number of switches, one of which is NPR1 (which has nothing to do with Ira Glass but rather stands for Nonexpressor of Pathogenesis-Related genes 1).

NPR1 is a master regulator- it activates a large number of genes to turn the entire plant into defence mode. Without NPR1, the plant is left defenceless, as researchers could show with knockout mutants which didn’t make NPR1.

Of course, NPR1 is only useful if it both turns on when there’s an attack, and stays off when there’s not. In the default state, when everything is peaceful and happy, NPR1 hangs around in the cytosol in large clusters, far away from the DNA with all the genes NPR1 would like to target. To make the systems doubly safe, if by chance a single NPR1 molecule enters the nucleus, it is quickly degraded to avoid misfire.

When, however, an attack is sensed and salicylic acid accumulates, the NPR1 cluster breaks up, the individual proteins are modified, and they are able to enter the nucleus where they bind to their target genes. Here comes the weird part: to be most effective, NPR1 undergoes a modification that increases its potential to activate gene expression but at the same time marks it for degradation. This modification, called ubiquitination, involves several small molecules (ubiquitins) being attached in chains to NPR1, which is a common signal to the protein degradation machinery to begin its work on the marked protein. Consequently, NPR1 gets destroyed.

While there is a model that explains this mode of gene regulation on a functional level, it still puzzled researchers. Degrading the activation protein leads to the need to constantly re-synthesize it – an energy intensive process. That’s where Michael Skelly et al. began their research. The cell, they hypothesised, probably has a more efficient way of using the key regulator NPR1.

By studying a number of mutants, they uncovered the role of the attachment of ubiquitin to NPR1. The enzymes able to glue ubiquitin to molecules in general can be organised into two groups. The E3 group is able to attach ubiquitin to a protein, while the E4 group can only extend a pre-existing chain of protein-bound ubiquitin.

When triggered, nuclear NPR1 attaches to the DNA and activates the expression of a target gene. The enzyme CRL3, of the E3 type, begins to attach ubiquitin to NPR1 which increases the level of gene expression even more. UBE4, of the E4 type, then builds on top of the attached ubiquitin and increases the chain length step by step. Eventually, the chain is so long that the nuclear protein degradation machinery finds NPR1 and degrades it. The gene expression drops back to zero.

The key to the efficiency of the regulatory process is the window between no and full ubiquitination: while only a few ubiquitin molecules are attached, the activity of NPR1 is boosted considerably. If there would be no ubiquitination at all, NPR1 would not be as good at its job. The researchers produced knockouts for both ubiquitin-attachment enzymes and the result was a lot of non-degraded NPR1 stuck to the DNA in an inactive form.

The right amount of ubiquitin at the right time is crucial. The researchers identified two additional enzymes that influence the activity window of NPR1. UBP6 and UBP7 are able to remove ubiquitin molecules from NPR1, which makes it less likely to be degraded and lets it hang around for longer in the most active form.

Together, all of these enzymes fine-tune the activity and turnover of the master regulator NPR1. While NPR1 focuses on getting the plant defence ready, a network of auxiliary enzymes activates, modifies, marks and degrades NPR1.

Once we understand this process even better, we might be able to adjust that fine-tuning to make our crop plants react faster or slower to potential infections to optimise their yield – but that will take a few more winters until we’re there.