Skunk cabbages and the invention of eukaryotes 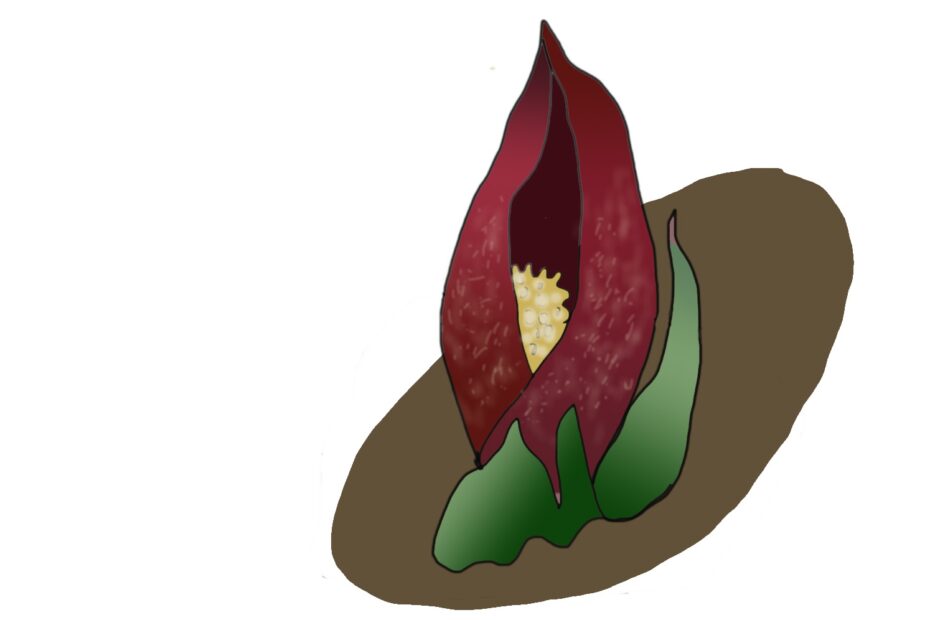 Welcome to Musing Mondays, where we ask …. what does a skunk cabbage have to do with the invention of eukaryotic life?

Let’s first start with what exactly a skunk cabbage even is.

It’s neither a skunk nor a member of the cabbage family Brassicaceae, to which our beloved Arabidopsis belongs. Instead, the skunk cabbage is a member of the arum or aroid family, which you can tell from its very arum-y flowers, that come complete with a large spadix (the pointy inflorescent part), enclosed in a spathe (the bract that covers it):

The skunk part of the name comes from the smell that it emits. Skunk cabbage is also known as ‘swamp cabbage’, fetid pothos or polecat weed, and even its scientific name- Symplocarpus foetidus- contains an unkind nod to its stinky nature. The leaves smell, if you break them, which might be a method to discourage grazing. But most of all, the smell comes from the giant bloom, a disgusting odour meant as a pleasant attractant to various fly pollinators.

The skunk cabbage spadix can generate an enormous amount of heat, keeping the ‘flower’ up to 15-35 degrees C above the ambient air. This incredible ability allows it to literally melt its way through frozen ground, timing the bloom event to perfectly coincide with the emergence of early insects from their winter hiatus. The heat produced may further help lure the pollinators in, both by providing an enticingly warm airspace for insects to hang in, and by intensifying the spread of that skunky scent.

This ability to create heat, known as thermogenesis, isn’t common in plants, but it isn’t unique to skunk cabbages. It’s been seen in other members of the arum family, as well as in palms, lotus species, cycads and water lilies. However, while most species heat themselves for just a few hours, skunk cabbages is able to keep its spadix fires burning for several weeks, a feat fuelled by massive stores of starch kept in its deep root system. Mechanistically, the heating starts at the mitochondria.

Which probably doesn’t surprise you. They are, after all, the powerhouses of the cell!

As you might know, one of the main purposes of the mitochondria is to make ATP. This involves breaking down sugars into simple carbon products, altering them, and then passing them through a conveyor-belt loop called the Citric Acid or Krebs cycle. The cycle spits out a couple of electron-carrying molecules (NADH and FADH2), which then pass their electrons to oxygen via membrane-integrated protein complexes. The electron relay involves pumping of protons (H+) out of the membrane to set up a proton gradient which can ultimately be used by ATP synthase to make ATP.

Sometimes, however, half of the chain is missed, and the electrons instead pass to a complex known as an ‘alternative oxidase’, which results in the production of, among other things, heat. Alternative oxidase (AOX) is useful for preventing buildup of dangerous reactive oxygen species, and to keep the Krebs Cycle running when things like ADP or phosphate might be limiting. So many species have it- including plants, but also some protists, fungi and invertebrates. But unlike the skunk cabbage, they mostly tend to keep it on the down low.

In addition to an AOX, skunk cabbage also has at least two uncoupling proteins (UCPs). These work to ‘short’ the membrane potential- letting protons back into the mitochondrial matrix without making them travel through the ATP synthase. Energetically wasteful if you want to make ATP (which usually, you do). But, as it turns out, a great way to produce a whole lot of heat!

(By the way, UCPs are also found in mammals, particularly in our brown fat, where they play an important role in keeping us at that toasty 37 degrees!)

So what does this all have to do with the invention of eukaryotes?

Eukaryotes differ from prokaryotes in that they have a true nucleus. But they also have other cellular sub-compartments, including mitochondria. In fact, the earliest eukaryotes we know of all had mitochondria, so it might be said that having a mito’ is synonymous with being eukaryotic.

Mitochondria first came to be when an ancient archaebacteria engulfed (ate without digesting) an alpha-proteobacteria… and decided to keep it around and tame it into an organelle. (Some time after this event, the eukaryote also took up a cyanobacteria, which became the plastid. And thus ‘plants’ were born!). It’s a great little origin story, but there’s a problem- we can’t quite work out why the archaea would bother holding onto the proto-mito, instead of just digesting it.

So Cory Dunn, a professor at the University of Helsinki, has suggested that when the archaea gave the proto-mito a home, the proto-mito gave back, with a gift of heat!

There’s a lot of evidence that suggests that the archaea ancestors were heat lovers, and we know that moving out of literal hotspots to colonise new ground would have involved certain adaptations. Including the creation of better enzymes, changes in requirements to manipulate nucleic acids, changes in lipid membrane fluidity, differences in solubility of gases, and altered stability of metabolites. To name just a few.

So if going from hot to cold is such as cost, maybe it’s easier to simply take the heat with you?

Dunn proposes that the proto-mito, which may have even originally colonised the archaea as parasites, became immediately advantageous to the archaea once they colonised colder climates. Even fully functional mitochondoria will ‘leak’ a significant amount of heat, but it’s also possible that the proto-mito were generating something extra, using methods similar to those found in the skunk cabbage! UCPs are probably only present eukaryotes, but alternative oxidases have been found in prokaryotes, so it’s not an impossible hypothesis! Although the rate of heat generation from the proto-mito might not be high enough to keep the new couple warm as a single cell (heat is lost pretty rapidly to the environment), it might make things toasty in an environment where a whole bunch of archaea-mito pairs huddled together. Kind of like a biofilm or matt.

If both parties in the new relationship were benefiting- by receiving either heat or housing- there would be an evolutionary incentive (i.e., selection), to keep them hanging out together. And if the couple had advantages over other species, they might be able to get more than their fair share of the resources, becoming bigger and stronger with time. Until we reached a ‘happily ever after’ of the proto-mito making enough ATP to hand it over to the host, a situation which ultimately lead to our current situation!

At this point, it’s all just a story- the ‘invention of eukaryotes’ occurred so very long ago that it’s hard to know what really happened.

But still, ‘heat for housing’ is a pretty cool hypothesis. And in any case, now at least the riddle of the skunk cabbage is solved!

The one from the 70s about skunk cabbage:

The one about the AOX and the UCPs: