Spitting in the eye of plant defences 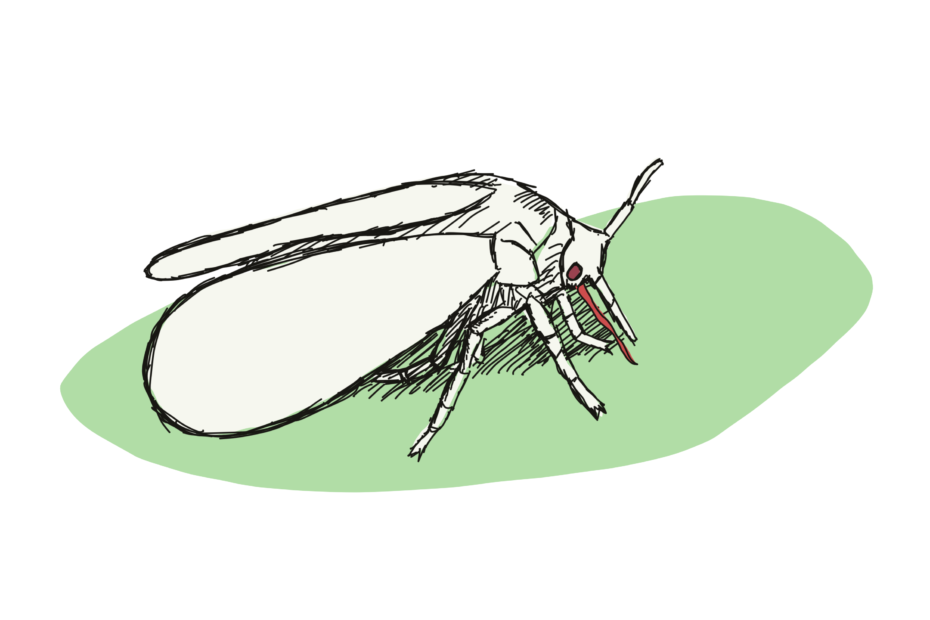 Unlike animals, plants can’t make a run for it when attacked by predators: they have to stand and fight. And fight they do, with a variety of defences designed to prevent themselves from becoming food. But of course, in the evolutionary tug-of-war of nature, the predators themselves have developed specialised weapons to surmount these blockades.

And for whitefly, the secret’s in the spit!

Whitefly, or Bemisia tabaci, are kind of a pain. And I say this not only because they have personally offended me by infesting my beloved lab plants and therefore ruining my experiments. Out in the wild, they feed on a white range of species, including tomatoes, broccoli, melons, cotton, pumpkin and various ornamental plants. In doing so, they not only steal plant nutrients, lowering crop yield, but also transmit a whole bunch of plant diseases. All up, they cause millions in damages every year.

In order to see why these little bugs were so good at infesting plants, scientists went straight to the source… of their saliva. It turns out that ‘special spittle’ is not a particularly new thing in the world of herbivorous insects. The caterpillar Helicoverpa zea, for example, has a salivary protein that is able to suppress the production of poisonous defence compound nicotine in tobacco (Musser et al., 2002). And aphid saliva contains proteins to prevent plants from defending themselves by closing down the bug’s access to sugar (Will et al., 2007).

So what’s so great about whitefly spit?

In previous work, the group of scientists had analysed the transcriptome – the type and number of the mRNA – found in the salivary glands of the whitefly, with the hopes to better understand the magic held within (Su et al., 2012). Now, they focused their investigations on certain saliva-abundant mRNA that encoded a small protein, which they called Bt56. Bt56 looked nothing like any other protein currently known to scientists, but it could be found not only in the fly spit, but also seemed to be found in plant tissue – only after it had been infested by whitefly!

Bingo! A possible weapon delivered from fly to plant in the war against the plant’s defence system.

In order to test this hypothesis, the scientists made two mutants. They guessed that if Bt56 was helping the fly overcome tobacco’s defences, then putting huge amounts of the protein in the plant should make it weak from the get go. And indeed, tobacco plants artificially expressing the foreign fly protein in their own cells- called 35S:Bt56 tobacco- had trouble fighting the flies. So whiteflies that fed on the 35S:Bt56 tobacco fed for longer and therefore lived longer and made more offspring.

The second mutant they made was in the fly itself. If the fly needed to ‘infect’ the plants with Bt56 in order to successfully feed, then bugs with lower amounts of the protein should be less healthy when fed a leafy diet. By using an RNAi construct- technology that allows transcript and therefore protein levels to be lowered – against the Bt56, the scientists produced a bunch of flies, which did in fact have lower survival and fecundity.

Finally, to show that it really was all about the war between plant and bug, the scientists mixed and matched their mutants. They fed the RNAi:Bt56 flies on an artificial non-plant diet (they were perfectly healthy), and then showed that they could ‘rescue’ even the leaf munching sick flies but letting them nibble on the 35S:Bt56 tobacco.

For those of your wondering how a tiny protein can so neatly dismantle the plants defences, it turns out that it’s probably all about hormones. Bt56 likely interacts with a plant transcription factor that regulates phytohormone pathways, including salicylic acid and jasmonic acid- both well known players in the plant’s defence against the pests.

You can read more about this research in the original article below.

And in the meantime, may your plants be forever pest free!