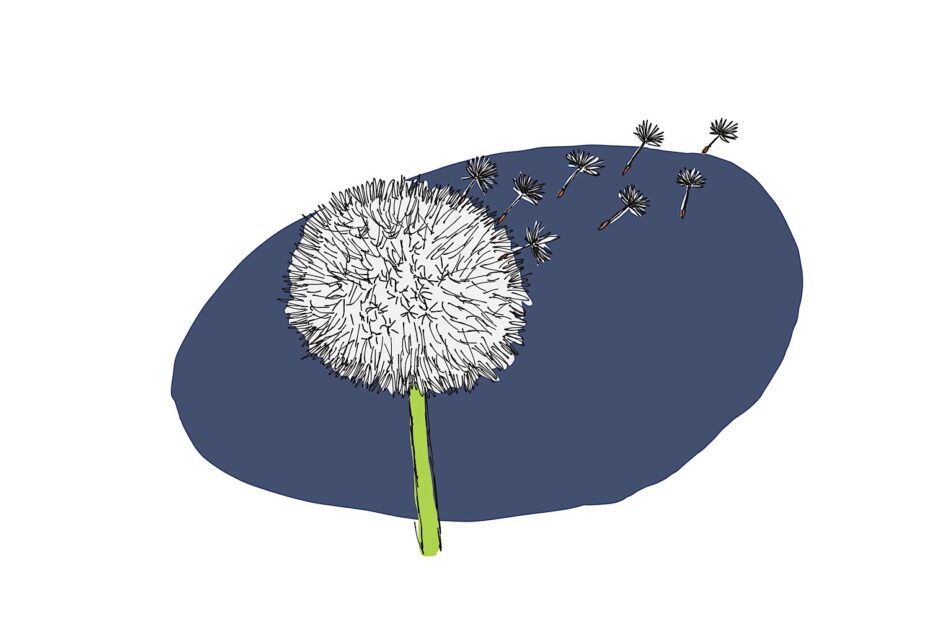 Last weekend, the Fast Forward Science competition held its Super Fast challenge – 24 hours to tell a story about science on Instagram… this year, with the topic of “Hero”. I didn’t have to look far in my neighbourhood to find a true hero of the plant world: dandelion.

Dandelion takes its name from the French name “Dents de Léon”, which means lion’s teeth, which happens to be the same (Löwenzahn) in our favourite non-English language, German. Despite its cool name, Dandelion has a bad reputation. Most consider it an annoying weed that is hard to get rid of, and the internet is full of tales on how to “manage” a dandelion infestation in your garden. Today, I want to tell you about the seven superpowers of dandelion and convince you to embrace its heroic feats.

1. Dandelion is a healthy salad

Dandelion leaves do not only look similar to rucola (rocket/arugula) and other salads, they also tastes alike. Its slightly bitter leaves make for an interesting addition to any bowl of greens. Dandelion is rich in vitamins and minerals and the plant has previously been used in many cultures as a medicinal plant for its proposed anti-inflammatory properties.

2. Dandelion is a no-jitter coffee

While it doesn’t feature fragrant beans that give you a kick in the morning, dandelion roots make for a caffeine-free alternative to coffee. Dried and roasted, they become the base for a hot ‘coffee’ that doesn’t turn you into a nervous shaking mess. On the other hand, it will still leave you tired.

3. Dandelion is a source of rubber

Speaking of tired, superpower #3 is dandelion‘s rubber content. Dandelion sap contains natural rubber that can be extracted and turned into car tires. While still under development, this could lead to an alternative source of natural rubber, complementing the current main source of Para rubber trees. Today, the increasing demand in natural rubber leads to the destruction of rainforests. But before you start digging up your garden‘s dandelions to repair your bike tire, keep in mind that it’s a Russian variety that has been bred to contain sufficient amounts of rubber for industrial use.

4. Dandelion is a nutrient digger

While gardeners hate dandelion for its deep taproots, they are just another superpower of the yellow-flowered weed. Its deep root not only makes it resilient to stress (like angry greenkeepers), it also helps to transport nutrients from deeper soil layers to the top where they become accessible to other plants and animals.

You can make wine from many different plants (think grape, strawberry, cherry), and dandelion is no exception.
Boiling dandelion flowers with sugar, citrus fruit and some other ingredients just needs yeast to let fermentation begin. After a few weeks, the dandelion and fruit mash has turned into wine. The dandelion is said to add a bitter, astringent flavour to the wine. And who would say no to that?

6. Dandelion is an early food source for insects

While dandelion certainly isn’t the very first plant blooming in spring, it arrives early enough (May to June) to offer a delicious feast of nectar to insects. Speaking of insects: dandelions are happy to use pollinators to exchange pollen between each other, but they don’t have to rely on them. Dandelion is capable of selfing (pollinating itself to create offspring) and even more than that – it can also reproduce asexually from bits of root in the soil that regenerate into full new plants, much to the dislike of greenkeepers.

7. Dandelion is the funnest plant to propagate

Dandelion’s seeds make up the iconic bulb of little paragliders. Each seed is attached to a fluffy parachute and it just takes a swift blow of air to send them flying. Reports indicate a flight distance of several hundred meters from the parent plant, survival in water, underground and in animal manure. No wonder you’ll find dandelion pretty much everywhere.

Dandelions are little superheroes combining very different skills into one super plant that conquered our parks and gardens. Maybe next time you see one you take a closer look, taste its leaves and enjoy setting a blast of seeds free.

You can find the whole instagram story in our highlights in German and English.

2 thoughts on “Superpowers and lion’s teeth”