The bite of the bumblebee 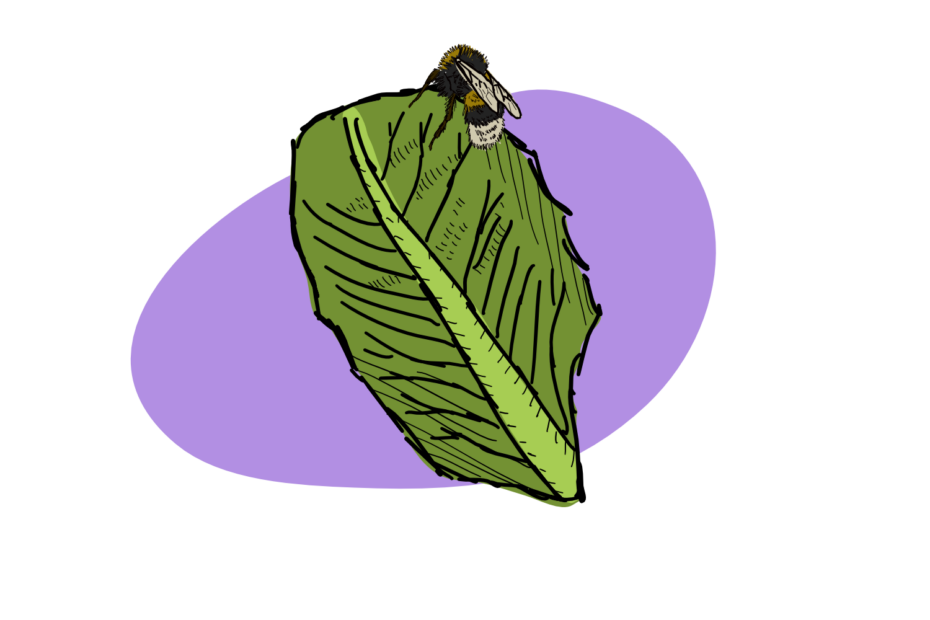 Bees and plants have a strange kind of codependency going on. Plants need bees for pollinating, and bees need pollen to feed their young. So it’s helpful for both parties if everyone involved can coordinate their calendars.

But if the flowers are lacking and the bees get hungry, well then, that’s when the bees begin to bite.

While some plants like to self pollinate (we’re looking at you, Arabidopsis), and others use the power of the wind (wheat, rice, corn and soybean), a large proportion of flowering plants rely on the activity of pollinating animals to move things through to the next generation. Grapes, almonds, cherries, the majority of berries, apples and pears – to name just a few – are all plants that rely on a little bee action to get the job done.

Of course, this dependent relationship doesn’t just go in one direction. While plants need bees to get their sex on, the availability of pollen also goes a long way to defining the success of future bee generations. For bumble bees, pollen is the only food source that the young larvae feed on, as well as making up an important protein source for busy worker bees. Survival and performance of developing bee colonies is related to the availability of pollen, with reduced floral resources at early development stages having carry-over effects on later-life reproductive success.

In short, the plants need the bees to reproduce, but the bees also need the plants to raise their young and achieve reproductive fitness. So it really just makes sense for everyone if the two coordinate.

It’s probably not surprising to hear that bumble bees begin new colony establishment in the spring, as flowers start to blossom, and that the bees shift their social organisms and undergo changes in life history that match the seasonal variation of flowers around them.

But what happens when the bees are hungry and the flowers aren’t ready?

As Foteini G. Pashalidou and colleagues showed in a recent publication, that’s when the bees might choose to cheat.

The scientists observed Bombus terrestris bumble bees using their mandibles and proboscises to cut distinctive half-moon or ‘pacman’ (my words, not theirs) shapes in the leaves of Brassica oleraceae (lettuce/kale/broccoli plants), B. nigra (black mustard), Solanum elaegnifoium (silver-leaved nightshade) and S. melongena (eggplant). Curiously, the bees were making successive cuts in the same plants, but weren’t making any efforts to either eat the leaf, nor to take it back to their hives.

It’s been shown before that various types of stress can induce flowerering, although a lot of prior research has focused more on abiotic stress (heat, cold, drought etc.,) rather than biotic stresses. To find out if the busy bee activity was encouraging the plants to flower, the scientists observed the flowering time for Solanum lycopersicum (tomato) and Brassica nigra plants following bee treatment that resulted in 5-10 holes per plant. As controls, they compared plants that weren’t subjected to the bees, and plants that were bee-free, but which did have small cuts in the leaves made by scientists imitating bee-inflicted damage with forceps and razors.

In a second round of experiments, the scientists investigated the link between the cutting action and bee hunger – bees that were pollen deprived for several days cut more than those that had been recently rolling in pollen. In subsequent experiments, bees proved to cut less often when floral resources were abundant nearby, and increase their damaging activities when wildflower availability was rapidly removed.

Together, these results suggest that bumblebees damage plants to provoke a pollen response, and that this action is enacted particularly when pollen is scarce.

The story is still missing a mechanism – the fact that bee bites elicited a much strong flowering response than scientists scalpels suggests that there could be a cue beyond the simple mechanical actions.

But for now, I’m pretty content with the idea that, to my mind, bees are pretty much just tiny farmers.