The grass is greenest on the inside 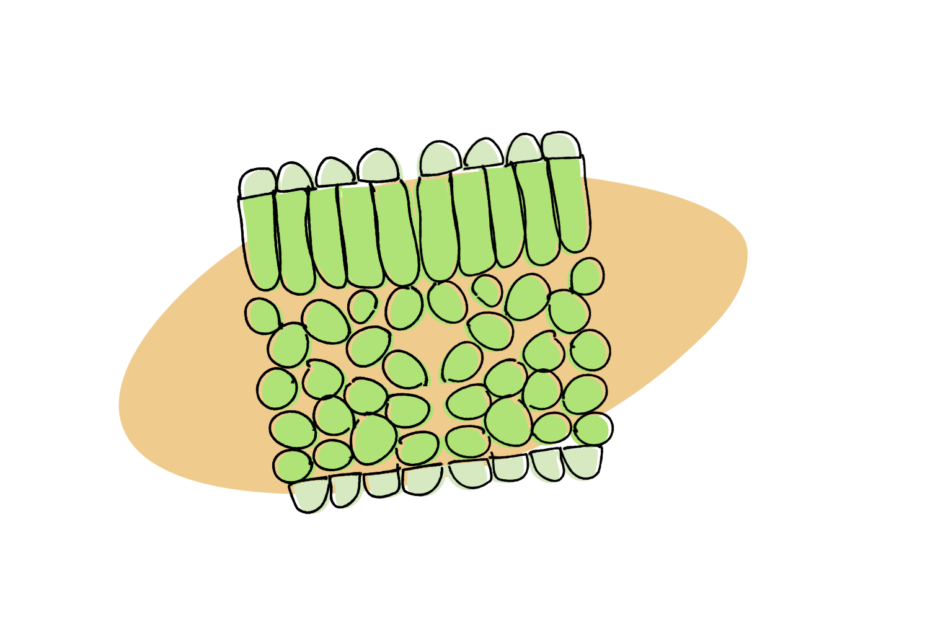 Sometimes, the world doesn’t seem to work in your favour. Your co-worker’s experiment works on the first try, everyone finds a seat on the train but you, and your lawn can’t really compete with your neighbour’s. Today we’re looking at whether the grass really is greener on the other side, a journey that takes us deep into the centre of the leaf.

We often think of plant leaves in two dimensions. Like a sheet of paper, they have a length and a width. And we understand that, within these two dimensions, they can be pretty heterogenous: variegated plants have white and green sectors, while others present distinct multicoloured patterns.

What we’re missing by looking at leaves this way is the third dimension: leaves have depth. And if we look at the leaf in this third dimension, making a cross section to see top to bottom, it’s quickly clear that different depths have different types and shapes of cells:

The clear epidermis layer covers top and bottom of the leaf, giving it some structural rigidity and protecting the soft insides from things like water loss and biotic attack (bacteria and bugs). To the top of the leaf, a layer of upright palisade cells guides the light into the layers below. Underneath, the spongy mesophyll cells have large gaps between them through which gases – mainly carbon dioxide and oxygen- can be exchanged with the outside world.

For a long time, we’ve gone about our science with the assumption that chlorophyll is distributed rather uniformly throughout the palisade and spongy mesophyll. Both perform photosynthesis, and hence they both need chlorophyll. This simplified view of looking at the leaf made life easier for us: when measuring chlorophyll content to draw conclusions, we could ignore the third dimension and base our measurements on the surface area (length x width) of the leaf.

Some researchers, though, began to suspect that this uniformity doesn’t quite describe reality.

Because light energy is absorbed as it passes through leaves from top to bottom, each cell layers sees progressively less of sunlight. So having equal light absorbing pigments (i.e. chlorophyll) at the bottom as the top doesn’t make a lot of sense. Furthermore, photosynthesis requires both chlorophyll-assisted light capture and carbon dioxide. And both carbon dioxide content, and the rate at which that carbon dioxide is converted into chemical energy (carbon fixation), are higher at the bottom of the leaf.

So where exactly is the bulk of the chlorophyll?

Aleca Borsuk and Craig Brodersen from Yale University went ahead and had a look. They placed thin sections of leaf under the microscope and illuminated it at a 90 degree angle with a laser beam. At the right wavelength, all chlorophylls lit up as they emitted fluorescent signals and could be counted.

To systematically investigate the photosynthetic patterns, Borsuk and Brodersen selected 57 different plant species across a wide range of evolutionary groups, including trees, shrubs, dicots and monocots. For each species they measured several samples and followed the chlorophyll signal throughout the depth of the leaf.

The different species did show differences in their patterns of chlorophyll accumulation. But overall, most peaked somewhere near the bottom of the leaf: on average, at a relative depth of 83% of the leaf’s thickness. In terms of leaf structure, this is somewhere deep within the spongy mesophyll layer.

What came as a surprise, was that the depth didn’t particularly match any structural feature of the different species’ leaves. It wasn’t correlated to the border between the palisade and mesophyll cells. And it wasn’t close to veins and their water supply. So how did the plant “decide” to accumulate most of its chlorophyll in this seemingly random location?

It seems most likely that it’s a compromise between multiple factors- light, gas and water. But it might also let plants be a bit more flexible. Because although we mostly consider leaves as having a ‘top’ and ‘bottom’ side, depending on leaf angle on the tree, and on external factors like wind and sun position, light can hit the leaf from both sides.

The authors looked at how different types of light penetrate the leaf from both the top and bottom. Using a smaller set of plants, they found that the chlorophyll maximum mark might just represent the spot in the plant where there’s a chance that a bit of photosynthetic light might get through, regardless of where the sun’s shining from.

While there remain plenty of open questions for future research, the new findings already help today with calculating leaf economics – how much energy is need when and where. This is an important prerequisite for biochemical models or synthetic biology.

Finally, we have scientific proof that the grass is greenest on the inside.