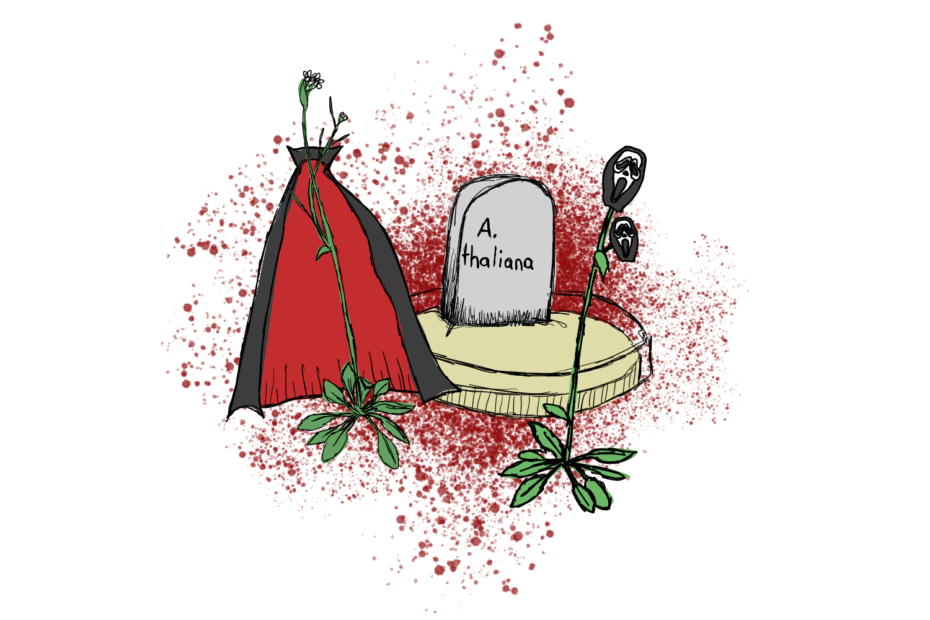 Earlier in the week we shared a list of the scariest plants, including some that are dangerous, some that are deadly, and some that just have really cool names and backstories.

Let us know in the comments if you think we’ve missed any!

Dracula isn’t a protein, it’s a mutant- specifically one that has a weird response to light. Ultimately, the mutant was found to be a defect in a previously defined gene phytochrome A, which is known to be involved in light sensing and response. Fun fact- in animals, there’s also an (unrelated) dracula gene, defects of which results in light-dependent lysis (explosion) of red blood cells!

While we’re on the ‘creatures of the night’ theme, we should mention werewolf– an arabidopsis mutant that has particularly hairy roots (get it?!). We’ve talked about this earlier on the blog.

Feeling like a group costume this year? How about HOBBIT, BOMBADIL, ORC and GREMLIN? Mutants of these guys all have problems with root development. Once again, there’s an animal gene to match (in case you have that one friend who wants to be a bit different). SMAUG is a Drosophila (fly) RNA binding protein involved embryonic development.

Headless (HDL), has a kind of spooky name for a not-very-terrifying phenomena: the mutants have reduced leaf elongation and altered leaf shape. The name comes from the fact that the problems start in the shoot apical meristem -that small bud at the top of the plants that leaves grow out of. Headless mutants don’t have much of a meristem!

5. Scream, speechless, too may mouths, mute
I honestly think these are my favourite of the bunch. The mutants all have abnormal development of the guard cells- the two cells that open and close tiny leaf holes called stomata. As you can maybe guess, the chattier-named mutants tend to make too many holes, while the quiet ones don’t make enough.

Ok, so Pennywise is actually part of a pair, the other being Pound-foolish- so it’s probably not referring to that creepy clown. Both genes are involved in the development of floral meristems (where the flowers are generated from).

7. Scarecrow and the birds

Ok, so Scarecrow is a gene involved in the root formation, and I think the reason for the name is simply that the mutant, which has two roots instead of one large root, looks a bit like a scarecrow. If anyone has firmer ideas, please clue me in. The coolest things about Scarecrow is that he comes with friends- Magpie and Jackdaw have been identified as two genes that regulate The Scarecrow’s actions!

Superman mutants produce too many male bits (stamens), and is therefore, apparently, a super man. Kryptonite was defined later and suppresses the action of superman. Clark Kent was also discovered based on the extra stamens phenotype, but was then found to just be another version of superman.

The Grim Reaper brings death. Cell death to be precise. What did you expect?

Poltergeist was found as a gene defect that suppressed the mutant phenotype coming from another gene defect (negative x negative = wild-type). The name itself doesn’t related to the gene function, so much as the fact that the Poltergeist mutant itself doesn’t have a phenotype, so Poltergeist can only be found in the background of the already mutated plants.

RIP doesn’t only stand for rest in peace. It’s also Ribosome Inactivating Protein. There are a whole lot of them in different plants around the world, and their expression can be one of the things that makes some species so toxic! (turns out we mammals also have ribosomes- and we don’t want them being inactivated!)

So that’s all from us with the scary! Let us know what you think of our list, and whether you think we missed anything!

Big thanks to EGD, JF, GEdS, OSI and the others in the lab who helped with the list!