There might have been a wasp in your fig – but don’t throw it away! 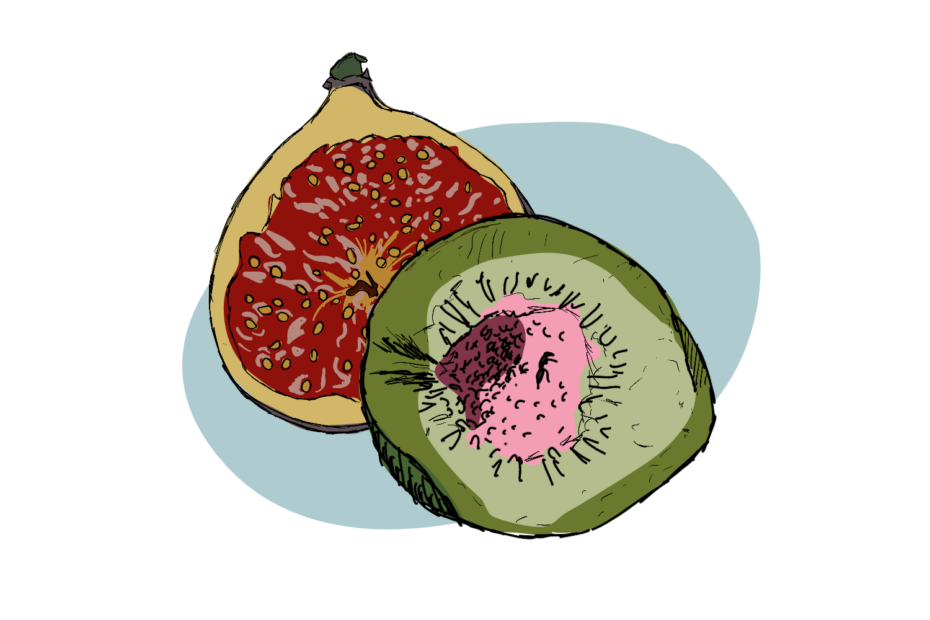 Although we like to focus our attention on plants, we can’t really discuss their life without also discussing the way plants interact with their pollinators. There are plenty of weird relationships out there, including those involving flowers that fake it, and stories of nectar thieves. But one of the weirdest has got to be the case of figs and self-sacrificing wasps.

Pollinators and plants have evolved together over tens of thousands of years. The plants “learned” how to present more attractive flowers to indicate delicious nectar to passing insects, birds, mice and other organisms (so that they can load them with pollen) and the pollinators “learned” to distinguish the best sources of nectar from less valuable plants. As a result, we find many optimised relationships with pollinators having specialised snouts/noses/organs to sip nectar and plants establishing just the right geometry for their favourite pollinators.

As it turns out, when two things co-evolve over a very long time, there is a chance for weirdness to emerge. We talked about plants that attract flies in fake fungal-lookalike flowers on the podcast, we discussed the role of mice in pollination, and today, we’re having a look at the weird relationship between figs and wasps – a story about dependency, sacrifice and individuals that never see the light of day!

If you look at a developing fig, you’re not actually looking at a fruit. Instead, the fig is an inverted flower, with all the flowery bits pointing to the inside. That doesn’t really sound like a intelligent design, from the point of view of the plant,  given that most plants want to present their flowers to the world, and therefore the pollinators, so that those can come, sip nectar, and spread the pollen. Figs, however, spent a long time co-evolving together with a tiny wasp to optimise their relationship to a new level of weird.

To actually get to the flower bits hidden inside the fig structure, the tiny female wasp Pleistodontes sp. crawls through an even tinier opening that the fig keeps open for her. The opening is so tight that the wasp loses its wings when crawling through – which would be a major loss if the wasp wasn’t planning to die inside the fig. Once inside, the wasp crawls around and visits many of the internal flowers and pollinates them with pollen it brought along (more on that later), before it lays its eggs inside the fig’s ovaries that will develop into seeds in the future. As it would be quite useless for the fig tree to lose all its seeds in exchange for pollination, the fig evolved to keep some ovaries inaccessible to the wasp. These ovaries will then develop into viable fig seeds.

With her eggs deposited, the female wasp dies inside the fig. Her eggs hatch into grubs and male and female wasps hatch within the fruit. The males are smaller than the females and don’t  have wings, as they will never fly. They do however get to mate with the females and, before they die, dig tunnels out of the fruit. The females get ready to leave the fruit through these tunnels – but before they do so they receive a parting gift from the fig. The male flowers are fully mature at this point and load the female wasps with pollen, which they carry with them. Once outside, the female wasps soon find another fig tree to climb into the figs, distribute the pollen they carry and deposit the eggs that developed inside them. And so the cycle continues.

Whenever I hear about such a truly weird co-dependency, I wonder why this might be advantageous to either player, fig or wasp. Many plants evolved to be able to self-pollinate to have a sort-of backup way of making it to the next generation. Some fig trees, however, can only cross with other individuals (which botanists call obligate outcrossing), and can only do this only when a specific wasp is present.

In a 2001 study, Martine Hossaert‐McKey  and Judith L. Bronstein investigated whether fig trees of the species Ficus aureus could actually use their own pollen to fertilize their ovaries, and whether this would lead to some sort of growth penalty – which would explain why the figs are so keen on avoiding it. They collected pollen when the male flowers were mature and used it to fertilize female flowers of the same tree once they were ready. They observed no impact on seed development which led to the conclusion that other factors than avoidance of in-breeding in figs might have led to the co-evolution of figs and wasps.

You might wonder why you never tasted a hint of wasp when biting into a fig. Well, there are two reasons. First of all, the fig expresses enzymes that completely digest the dead wasps, which is quite clever as ‘wasp juice’ happens to provide an additional source of energy that would otherwise be lost. There are usually no remains of the insects left once the fruit reaches maturity. The second reason is that many commercial varieties of fig are actually seedless, with female trees producing fruit completely independent of pollination. This holds a two-fold benefit to us humans: first of all, we don’t have to worry about wasps in our fruit and second of all it means much easier cultivation. Seedles fig varieties can be grown more easily without the reliance on a specific wasp species in the orchard.

While there is no need to be afraid of wasp remains when you eat a fig, I suggest you take the time to admire the intricate structure of a halved fig – what you see are the remains of many inverted flowers that evolved to be part of a uniquely weird way of pollination.

The story of the fig and its wasp

How fig trees are pollinated

Are there really dead wasps in your figs?