This plant survived the dinosaur end days, but so did its insect pests 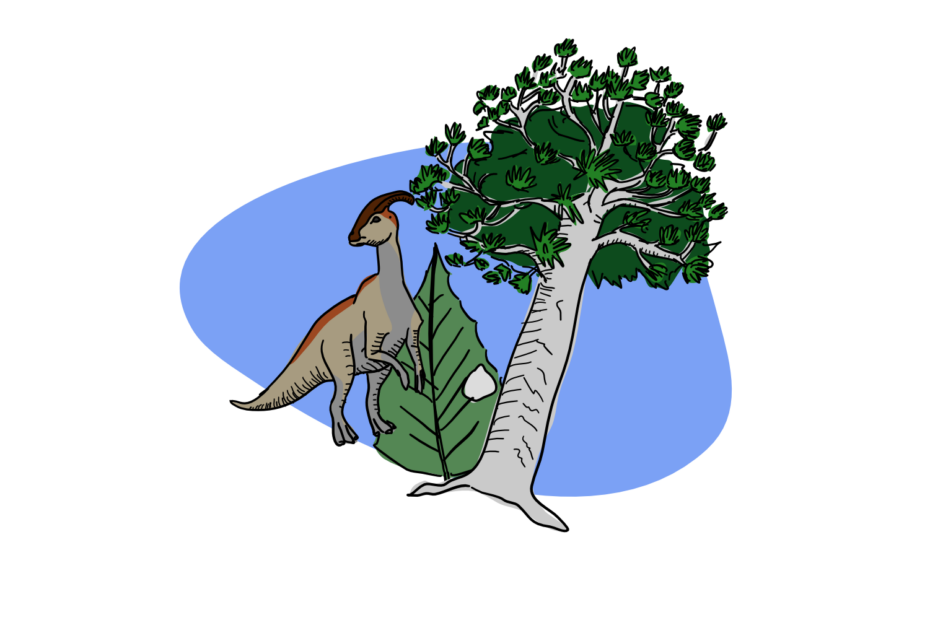 Agathis trees have survived since dinosaurs roamed the earth, but throughout the ages, tiny burrowing insects have made their life hard.

While the towering and often thick-trunked trees of the Agathis genus are themselves quite beautiful to behold, their true glory rests in their age. Agathis trees belong to an ancient family of conifers – Araucariaceae, whose modern members- species of the Araucaria, Wollemia, and Agathis genus, have ancestors stretching back to the days of the dinosaurs.

Recent fossil evidence, for example, indicates that Agathis ancestors may have been hanging around and fixing carbon since the Late Cretaceous to early Paleocene!

Now I’m pretty terrible at remembering my historical time periods, so I tend to have to look it up. The Cretaceous, as it turns out, was from around 145 to 66 million years ago. The late Cretaceous was around 101-66Mya, and the Paleocene was 66-56 Mya. If, like me, you’re still struggling to get your mind around that insanely large number of years, you’re gonna want to do what I always do next – spend a bit of time looking up what dinosaurs roamed the earth around that time.

You know, for context.

You’ll be happy to hear that I’ve already done the looking for you, and I’m very pleased to report that the late Cretaceous was the temporal home of the greatest of all dinosaurs – Parasaurolophus. (What can I say, I love his fancy head and the fact that he seems to have used it to make loud honking sounds. Honestly, I can relate). For those of you who have less refined taste, and thus don’t care for our little Parasaurolophus, the more popular fan favourites like T-rex, velociraptor and triceratops also seem to have made an appearance in the late Cretaceous. As did a cute little fellow who is called Pinacosaurus. Despite Pinacosaurus looking almost exactly like a bobble-tailed pinecone on legs the name apparently means Plank Lizard.

Anyway, the late Cretaceous eventually became the Paleocene, but not before the Cretaceous-Paleogene (K-Pg) extinction event occurred. At which point, about 2/3rds of animal life on earth was zapped into non-existence over a very short period of time. There’s still a bit of debate about what exactly went down, but the common frontrunner for the global destruction is an asteroid. Followed by lingering winters, general climate change and ocean acidification.

Any of this sounding familiar to our current situation?

The point of all of this is, that if you’re wondering about the wanderings of dinosaurs in the Paleocene well…  you’re out of luck. Post K-Pg we mostly only got to keep the chicken ancestors.

Because this is technically still a plant blog, I want to mention that a tonne of plants were wiped out or generally messed around by the event, which in turn, seemed to have amplified the animal deaths. Turns out that most animals rely on plants for their survival.

But where others failed, Agathis species – at least some of them – survived. Fossils from various Agathis species have been dated back to shortly before (67 Mya) as well as shortly after the K-Pg extinction event (around 64 Mya and 44 Mya), suggesting that the Agathis genus survived and thrived through the most difficult of times.

But a recent study from Michael P. Donovan and colleagues, reveals that while the plant genus has persisted, so too have attacks on the plant by herbivorous and destructive pests. The well-preserved nature of the various fossils allowed the scientists to investigate biological damage to various Agathis species across 18 million years of evolutionary time. Along with various forms of hole-, margin- and surface- feeding, signs of sucking and piercing, skeletonization, oviposition, galling and pathogen attack, the scientists also detailed the distinct activity of leaf miner attacks.

Leaf miners are a catch-all term for various species of moths, sawflies, flies and others that live in and eat the leaf tissue of plants during their larval stage. There are thousands, or maybe even over ten thousand species of leaf mining insects throughout the world, so it’s not always easy to track which species are responsible for the damage (especially not in ancient fossils that the bugs themselves have long vacated). But some indications can be given by the size, shape and structure of the mining pits themselves.

Extant Agathis species have been shown to be attacked by two species of leaf-mining insect, specifically the moth Parectopa leucocyma and the longhorn beetle Microlamia pygmaea. But the ancient Agathis mines didn’t match the tracks left by those enemies. However, by scouring modern Agathis samples, as well as samples of other plant species subjected to insect mining, the scientists were able to support the concept that insect attacks similar to those of the ancient fossils were still going on today. And they even found a possible ‘extant analog’ culprit – the weevil Peristoreus flavitarsis.

Overall, the study shows persistent attack of incredible extinction-event surviving plant species by leaf mining insects. Although it’s possible that both the Agathis and its insect pest made it through the disastrous K-PG extinction, it may also be that some or all of the chewing culprit species went extinct, and that  destructive niches were soon filled with new, convergent colonisers.

As with many modern species, Agathis trees are currently threatened by human activity, not just by our induction of further climate shifts, but also by more local pressures such as logging. Agathis trees remain home not just for insects, fungi and other pests, but are large keystone species that support a range of animal and other lifeforms. For a plant genus that has survived since the time of the Parasaurolophuses to be wiped out by human carelessness, would be nothing short of a tragedy.