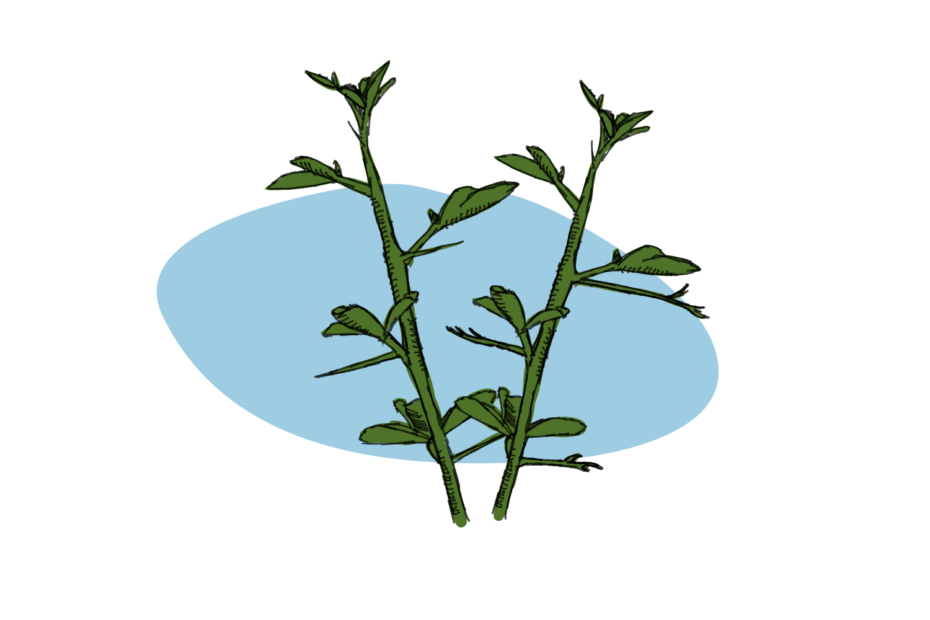 On today’s episode of “how it’s made”: Thorns!

The pointy defence system relied on by many plants has an interesting origin story. Thorns start out as branch-like structures that grow out of the main stem and then, all of a sudden, turn into sharp death spikes. Now, researchers have not only figured out how that happens, but also how it can be stopped.

Plants can’t outrun their predators. Plants and I are pretty much alike in that respect, although we each have our own way of dealing with that problem. I, on one hand, was lucky enough to be born into a fairly predator-free environment. Plants, instead, had to develop a number of defence mechanisms. Thorns are probably the most visible approach and one that gets straight to the point (pun intended).

Here is a bit of trivia for you that will make your botanist friends happy and annoy everyone else: the band Poison is lying when they sing “Every rose has its thorn”. Technically, those things on roses – they’re not thorns. Thorns develop from branches, but rose spikes develop from modified epidermis cells, making them prickles (similarly, the spines on a cactus are modified leaves). So next time the power ballad is playing, sing “every rose has its prickle”. You know, just to be botanically correct.

When a thorn is made, its development starts out quite similar to a that of a devloping branch. Stem cells – cells that have the ability to develop into different kinds of structures – divide and elongate into a branch-like structure. Then, at a certain point, growth is stopped and the whole structure hardens into a spike. This process is somewhat reminiscent of flower development. The stem cells in the meristem begin to grow, and are then rapidly switched from ‘leaf/branch’ to ‘flower’ mode as a whole slew of genes for flower formation are kicked into gear.

On a molecular level, the protein Wuschel drives growth in the meristem. To stop meristem growth, other proteins bind to the genetic control elements of Wuschel and block its expression. These factors have been known for a while, having been discovered by researchers interested in floral development. But due to the large difference in flower and thorn appearance, scientists believed that while the mechanism might be similar, the actual controlling factors might be different.

This is where Fei Zhang from Yale University in Connecticut, USA, and colleagues come in. They set out to find the factor that are responsible for thorn development, and possibly discover how to stop thorn development. They chose citrus as a model species, more precisely the Citrus hybrid Carrizo citrange (Citrus sinensis “Washington’” sweet orange crossed with Poncirus trifoliata), a common commercially used variety.

During its early growth, Carrizo citrange produces very distinct thorns next to its branches. Fei Zhang and colleagues started out by looking at the early development of the thorns. They observed what was known before: the meristem grows, the stem cells divide until they stop and the whole structure hardens and forms a pointy end. At the gene expression level, they found, as anticipated, that Wuschel was active until the growth stopped, then it was turned off. However, it was not turned off by the same factors that controlled Wuschel in flowers. And there was no immediate clue as to what other molecule influenced the activity of Wuschel.

The research team turned to another citrus fruit to continue their investigation. They chose two lime varieties, one with thorns and without. By comparing the gene activity between the two varieties, they identified a number of genes that showed increased or decreased activity in the thorn variety compared to the thornless lime. One of them seemed to perfectly fit the activity profile of Wuschel: when Wuschel was active, the new gene was inactive and once the new gene became active, Wuschel was deactivated. They named the new gene Thorn Identity 1 (TI1).

Using the genetic sequence information about TI1, they also found a closely related gene, TI2. TI2 followed TI1 in its activity profile during thorn development. Having multiple copies of a gene is nothing unusual in plants. During evolution the genomes duplicated (sometimes multiple times) in many species, leading to more genetic diversity and the occasional gene existing in multiple, slightly different copies.

This is the point, where modern science recently became a lot easier. When researchers wanted to turn off an interesting gene a couple of years ago, they often had to leave their favourite model species and turn to Arabidopsis. For the tiny weed, researchers had built a large collection of mutants and other researcher could browse the catalogue to hopefully find their desired mutation. While Arabidopsis is a great lab rat, it lacks some features of other plants – like in this case thorns. Studying a thorn-related gene in Arabidopsis will likely lead nowhere.

Luckily today, we have CRISPR. Fei Zhang and colleagues used the genome editing tool to turn off TI1 and TI2 in Carrizo citrange first individually and then could even create a line in which both TI1 and TI2 were switched off.

When either TI1 or TI2 were shut off, the number of thorns on the plant decreased, with branches growing in their place. But it was only when the scientists made plants lacking both TI1 and TI2 (called ‘double mutants’), that all of the thorns disappeared. Using additional control experiments, the researchers could show that TI1 and TI2 are both involved in semi-redundant control of Wuschel.

Turning thorns into branches has some obvious advantages for anyone who works with thorned plants. We must not forget, however, that thorns also serve a defensive purpose and that defenceless plants go by the name of “food for animals”. The discovery in this paper has further importance, however. More branches means more leaves and hence more energy collected that could be funnelled into fruit. It is much too early to promise high-yielding, thorn-free citrus plants but it is research like the one we talked about today that gives breeders the ideas necessary to make better crops.