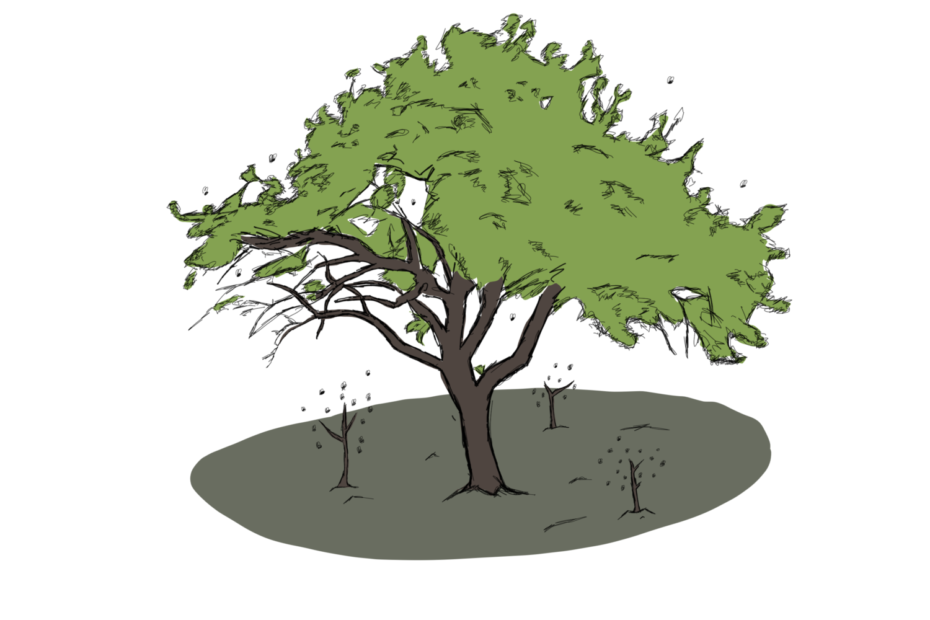 How many different plants can coexist in one environment?

It’s a question that I ask myself every time I walk past a plant shop and contemplate buying yet another Monstera-like cousin for my increasingly overcrowded flat. But it’s also a question that scientists have been asking for many years when discussing dauntingly diverse tropical forest ecosystems.

It turns out that we may have had the answer for nearly 50 years.

The extraordinary species diversity of tropical forests has remained a scientific mystery for some time: over 1000 tree species can exist in one forest ecosystem. This state of hyperdiversity persists in defiance of several scientific theories, which suggest that a combination of time, random birth and death events, and competition should ultimately pick out the weak, and favour just a few species to stick around for the long ride.

Competition is based on the fact that life, much like love, is a battlefield. Resources are limiting and some individuals or species are just better at getting them than others. Of course, where there are winners, there are also losers -over time, competition results in a general reduction in biodiversity. Generally, where there are more resources to share, or more specific roles for species within an ecosystem (niches), higher biodiversity wins out. But even these factors cannot quite explain what’s going on with those tropical trees.

A second theory of diversity, defined by Hubbell (1), tends to ignore the blood bath. It rather states a ‘neutral theory’ in which all an organism’s chance of surviving is unrelated to its species identity. As a whole, species gain or lose members due to random events. However, like the competition, when played out over hundreds of thousands of years, this kind of drift results in either death (of a species) or dominance. As in, diversity= 1.

In both theories, loss of species can be somewhat counteracted by influx of ‘immigrant species’, and by speciation – in which different populations of one species become too different from each other, and split into two species. ‘Rare species advantage’, in which – you’ve guessed it – rare species have an advantage (2), can also help keep the diversity up. But overall these theories still can’t simulate the situation we see in our forest friends.

Enter the Janzen-Connell mechanism (3,4). A delightfully elegant theory in which natural enemies infecting adult trees are aggressive enough to kill any new plantlings of the same species that try to sprout nearby. If these enemies are species-specific, that is, they have certain tastes for certain trees, they’ll destroy seedling of the same species, but leave the way clear for young from other species.

The problem was, that although the Janzen-Connell was proposed 48 years ago, no one has been able to really test the theory, a feat that would require (computer) simulation of the development of large landscapes of tree over even larger timescales. Until Levi et al entered the game.

They simulated a tropical forest over a period of time representing 200 billion tree replacements (death followed by growth of a new individual). Which, given that each tree lifetime is approximately 200 years, is like watching 40 trillion years of tree life.

Much like watching the grass grow, but with trees.

The scientists ‘grew’ their trees using different variations of the Janzen-Connell mechanism (check out the figure below). In the first variation, when one tree dies, tree enemies prevent an individual from the same species from growing in the newly available space. In the second variation, this ‘exclusion zone’ is widened. The empty space can not be occupied by young of the dying species, as before, but also cannot be occupied by any young of the tree species directly next to the empty space. With the assumption being that their pests can also move in on the territory. In variations three and four, the pests have an even wider range. Species within two trees (variation three), or three trees (variation four), can also successfully launch their young into the empty space.

And … the theory worked!

Compared with the neutral hypothesis, in which diversity rapidly declined to monodominance (a single species wins), exclusion zones resulted in higher species diversity at the end of the simulation. The wider the exclusion zone, the higher the final diversity.

The scientists also tried different sized environment and found that bigger landscapes also resulted in a higher diversity. Even a landscape of just 400 by 400 trees- tiny compared to what is seen in nature- with the weakest exclusion zone (variation 1), maintained approximately 200 tree species after 200 billion years of life and death!

This model does not take into account other mechanisms which can also contribute to increased species diversity over time, but instead demonstrates that a simple exclusion zone can go a long way. Of course, this zone relies heavily on the work of pesky pathogens and irritating insects. But rather surprisingly, the enemies themselves don’t even have to be that good at their role. The scientists also tested scenarios in which the enemies ‘missed’ their kill shot on the sprouting species at different rates: 5%, 20% or 50% of the time. Although more accurate attacks resulted in higher diversity, even lazy bugs were suitable to maintain a pretty decent level of diversity.

So does this really answer the question of why the tropical forests are so special? Well in part, it does. It should be noted that, compared to other ecosystems, the general niceness of the environment probably comes into play: water and light are fairly accessible, and the temperatures don’t diverge too much from what is pleasant to many plants. But based on this study, it looks like the ability to maintain high diversity might also be down to the pests. The authors note that the ‘moister’ (ew) a forest system is, the more diverse it is likely to be. And it turns out that moistness is something that also correlates with the success of pathogenic fungi.

So maybe, in the end, it’s not about plants … it’s all about mushrooms?

This paper is a journal club based on: