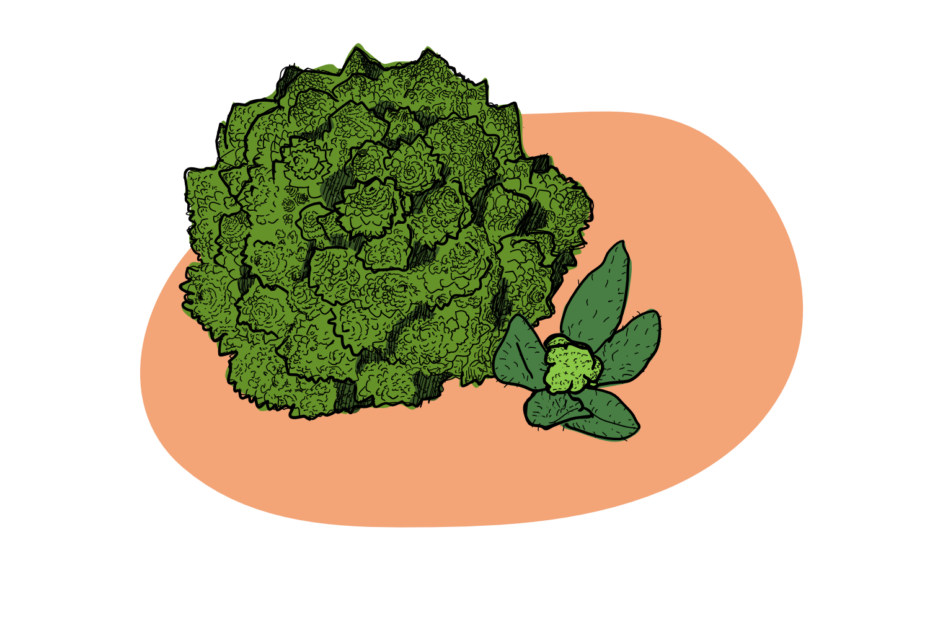 Cauliflower’s ability to imitate anything from ‘rice’ to ‘wings’, has seen the previously humble veggie rise in power in recent years. Yet while its transformative powers are celebrated by foodies across the world, until now it has remained unclear how the vegetable itself (and its fancy Romanesco variant) evolved from its plainer predecessor – cabbage

The truth of the matter is that cauliflower is just a fancy version of cabbage: they both belong to the same species, Brassica oleracea. In fact, it’s a bit of an open secret that a good half of the greens you eat – cauliflower, romanesco, broccoli, gai lan, kale, savoy, brussel sprouts and kohlrabi – are all just weird little cultivated mutants of the same species.

Cauliflower, for example, is a cabbage plant that grows to maturity, starts to make a flower and then  just… fails. Instead, the poor plant gets stuck in a loop of making more and more inflorescences (flower clusters), which also don’t make it. The cauliflower swells, brain-like, until it’s harvested and makes its way to be  baked-fried-grilled-dipped-or souped to perfection.

Scientists had not yet completely worked out what exactly goes wrong to get the plant all loopy, but it does seem clear that genes that regulate flowering are involved. Previous experiments on Arabidopsis thaliana, the model plant that also just happens to be a member of the larger Brassicaceae family, suggests that at least two genes are involved: one is called APETALA1 (think petals), while the other is conveniently named CAULIFLOWER. Both are known to promote floral development, so it makes sense that disrupting them might cause a glitch. But it’s unclear if the two alone are sufficient to turn a plain old cabbage, into ‘vegan chicken wings’.

So, in order to comprehend what caused the cabbage to cauliflower change, Eugenio Azpeitia and colleagues combined a whole lot of literature research, with some nifty 3-D computational modelling, and some fancy mutations of innocent arabidopsis.

The scientists first used the knowledge – gained from scientists around the world through years of research in arabidopsis – to develop an in silico (computer) network of floral development. This network contains a number of genes that are known to interact – they can activate or repress one another, often in complex patterns. Then, they tested the model. In the computer, they turned certain chosen genes in the network off, and observed if those disrupted cascaded through the network to alter the levels of the other network genes. They compared the calculated effects to what was previously observed in real arabidopsis plants  that were really missing those chosen genes. Convinced of their network, the scientists then moved on to a more complex model – that included these genes within a 3D structure. Which meant that it was time to try making a cauliflower!

The 3-D model could successfully reproduce the look of various floral gene mutants: knock out a gene, get a weird looking floral structure. But strangely, even the combined disruption of APETALA and CAULIFLOWER couldn’t bring about a true cauliflower-like shape. It seems like they might have missed something.

Ultimately, they realised that the secret lay not only in disrupting the expression of the two genes needed for floral development, but also required disruption of a gene that kept the size of the cells that were trying to develop (the floral meristem) in check. The triple gene alteration worked on the 3D model and then, after several months and a lot of hard lab work, could also be shown to produce tiny cauliflower-like flower buds in arabidopsis plants.

The final trick up the scientists’ (lab coat) sleeves was to see if they could also model cauliflower’s fancier cousin: Romanesco. By altering the timing between the successive loops the cauliflower was stuck in (think, turning a tap on and off), the scientists could show that the more conical, fractal-like shapes of the romanesco would arise!

The results demonstrate the ways that the fascinating (and sometimes even fractal!) plant architectures found in nature and crops can develop, while also providing a nice example of science in its purest ‘desire for knowledge’ form. Sure, we already had cabbages and we already had cauliflowers. But now we know how to get from one to the other!