This seaweed would look completely different without the bacteria around it 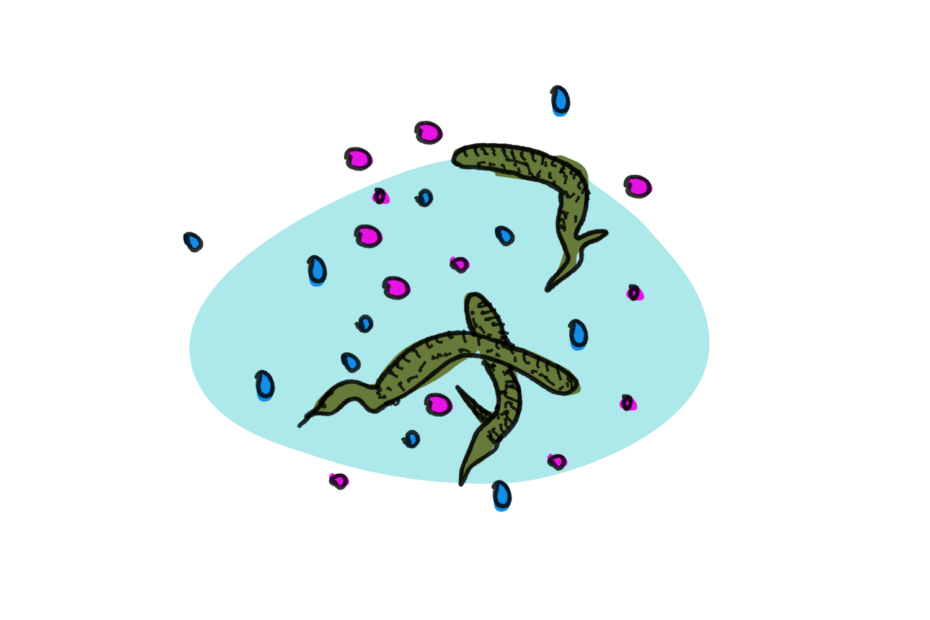 Do you ever wonder how you would have turned out if you’d hung out with different crowds in your youth? All living things – you, me, plants – are shaped by their environments, which includes both non-living/abiotic factors (sun, sea and soil), and biotic factors – the other living things around us.

The seaweed Ulva mutabilis is no different – while growing up its shape and size heavily relies on the microbes around it. And without its bacterial friends, it will never settle down.

Algae can be weird. Many of them don’t look anything like the land plants that we’re much more accustomed to. Instead of a stem, defined leaves and proper roots, they just have a thallus, an undifferentiated tissue that does the job of many organs at the same time. Ulva mutabilis is one of those algae with only a thallus and it lives in coastal seawater. Some 70 years ago, researchers isolated a strain off the coast of Portugal and since then many more have been experimenting with the green alga.

Ulva mutabilis, also known as sea lettuce, would not be the same without the bacteria around it. This is quite common for plants and animals alike. While we often tend to think of bacteria in the context of their nastier members that cause sickness or disease, our bodies are filled with billions of ‘good’ bacteria that help us digest and fend off infectious intruders, amongst other things. The same is true for plants – bacteria swarm across their leaves, live between their cells and colonise their roots. One famous example of this is rhizobia, which form mutually beneficial symbiotic relationships with the plants. Rhizobia are famous for their ability to fix nitrogen from the air – a skill that plants don’t have – and willingly trade their nitrogen for photosynthetically fixed carbon and a comfy home within specially grown nodules on the plant root.

While the rhizobia-plant relationship is an example in which plants undergo a physical change through their interaction with bacteria, Ulva mutabilis takes the whole physical change thing one step further. While the algae found in the wild grow stems and blades, when grown in the lab, U. mutabilis only manages to develop as a callus under bacteria-free conditions. Callus tissue is consists of unorganised cells, is rather tough and usually is used by a plant to heal wounds. It’s only when bacteria of the kind Roseovarius sp. and Maribacter sp. are added that the alga develops into its proper sea lettuce form. What’s more, adding only one kind of bacteria is not enough, both bacteria have to be present to make Ulva mutabilis happy.

Until a couple of years ago, researchers had no idea what specific molecule made by the bacteria was triggering the growth behaviour of the alga. So they gave the entire group of unknown molecules a catchy name: algal growth- and morphogenesis-promoting factors (AGMPFs, which, incidentally, is the sound you make when you accidentally step on a piece of seaweed during a day at the beach). Only one such AGMPF – thallusin – could be identified so far. To understand the process around alga development better, a group of PhD students from the lab of Thomas Wichard in Jena, Germany, grew Ulva mutabilis in their lab.

To understand the mechanism behind the bacterial influence on the alga, the researchers grew the alga in sterile cultures – without any trace of bacteria. As expected, the alga didn’t enjoy its solitude too much and only developed callus material. To stimulate blade and stem growth, the scientists could have added the two bacterial strains to the algal culture. Instead, they grew the bacteria in cultures separately and then filtered the cultures to remove the bacteria themselves, leaving only growth juice (media). When they added the sterile liquid to the alga, the algae started growing roots and leaf blades again. This shows that compounds secreted by the bacteria was sufficient to trigger the growth behaviour and that direct bacterium-to-alga contact wasn’t necessary.

Working in the university city of Jena  proved to be a major advantage to the researchers. “Here, the research scenery of Jena offers excellent conditions for such interdisciplinary investigations (analytical chemistry, molecular biology, chemical biology, microbiology).”, Thomas Wichard said. One of these diverse methods turned out to be mass spectrometry which the researchers used to analyse the bacterial culture combined with bioassays testing for AGMPFs.

Unfortunately, the signalling molecule secreted by the Roseovarius bacterium remained elusive. For Maribacter, however, the researchers could detect thallusin, the previously identified AGMPF. For the first time ever, they could show that the compound hangs around outside of bacterial cells. What’s more, the researchers can now add thallusin directly to the culture and understand its effects even better. “With the morphogens (external stimuli) in our hands, we can produce cultures [lacking the bacteria] that form the full thallus.”, Wichard explained such an experiment would allow us to precisely study the action of the molecule without any additional effects caused by the bacteria.

Back to the current research, when the researchers added isolated thallusin to the algal culture, they found that tiny amounts are sufficient to control growth – 11 picomoles per litre, to be exact. 11 picomoles per litre of cooking salt – sodium chloride – is equivalent to 6.4 grams of salt in 10 billion litres of water which would fill a medium sized lake. That is an astonishingly low concentration!

You might wonder why bacteria and algae play so nicely together and Ulva has become dependent on bacteria. Thomas Wichard explained: “Since both Ulva mutabilis can attract ”their“ bacteria, and bacteria can direct germ cells to the biofilm (on a rock), Ulva only forms a full-grown alga when it settles on a biofilm that releases the rhizoid-inducing substance thallusin.”

“Ulva mutabilis can thus anchor itself to the ground by the growing rhizoids which act like roots. Then, Ulva‘s growth is triggered by further (unknown) bacterial AGMPFs. Bacteria make the algae sessile by inducing rhizoid formation, to get the photosynthates [like sugars and glycerol].” And there is also an additional potential benefit for Ulva. The bacteria are able to gather and concentrate iron in their cells, which the alga might receive in return for photosynthetically fixed carbon. Thus the relationship becomes beneficial for both players, the microbial community and the alga.

“Importantly, by forming the rhizioidal zone, bacteria and algae become neighbors and form a symbiotic community, ready for biotic cross-kingdom cross talk, but much more research is necessary”, Thomas Wichard said.The research highlights once more how life relies on the complex interplay of different species, which communicate through the secretion of signalling molecules and building blocks and support and control each other. Without the cross-kingdom interaction between the bacteria and the alga, the alga would not be the same – which is a good reminder that even the tiniest of organisms often have an impact on much larger species.

A big thanks to Thomas Wichard for providing additional insights and fact-checking!