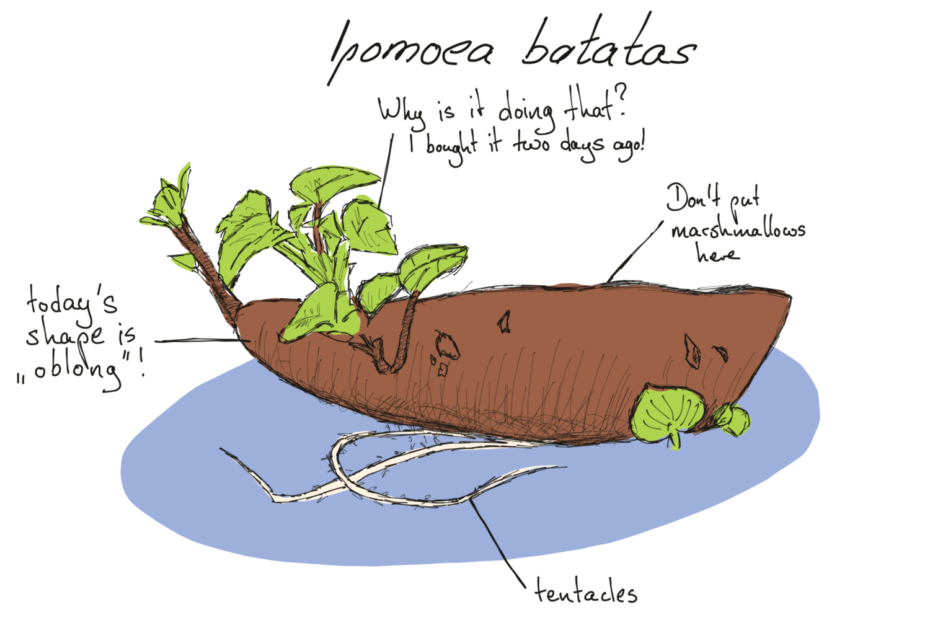 At the end of January a twitter trend made its way to us and we could not resist joining in on the fun. Let’s unscience all the plants!

This week we’re making Joram work hard for his keep, and getting him to draw as many of your #unscienceaplant suggestions as he can possibly manage. We’d love for some more ideas- the more obscure (weird and wonderful!) the better! Feel free to add down in the comments

First up, here are our first few entries to the unofficial contest of the least scientific plant description:

Read more about Arabidopsis, and it’s role as an important model for plant scientists here.

Ok ok, so we know that Chlamydomonas reinhardtii, affectionately known as ‘chlamy’, is not a plant. In fact, it’s a single celled green alga. And really, the term ‘green alga’ is a bit old-fashioned: we now know that the green algal things come in many different types. So if we want to be picky about names, Chlamy isn’t a plant, but all plants kind of DO belong the larger cluster of things we often call ‘green alga’.

Too complicated? Well to keep it brief, Chlamy is an important model species to plant scientists even though it’s not a plant. Mostly because it photosynthesises (with its single U-shaped chloroplast). But also because it has a whole lot of features useful for labrats: short life cycle, known genome that is easy(ish) to manipulate, easy to grow in the lab…

But it can also tell us things that plants can’t- like how single-celled organisms move in response to stimuli (note the fling-flongs a.k.a flagella). And as a ‘simple’ organisms, we can learn a lot about evolution by comparing Chlamy with some of our other plant friends.

The final #unscienced plant is Nicotiana tabacum. Infamous to the world at large as the source of cigarette tobacco, but beloved in the plant community as another model species. Tobacco has a pretty complex genome (not ideal!) but has long been used for studies of the chloroplast genome- which has been transformable since way back in 1990! Plus has growth properties that make it more similar to crops than Arabidopsis.

We’ll talk more about tobacco (and chlamy, and a whole bunch of other species) in a later post!

In our quest to unscience all the plants, we’ve also taken on a rose, because of Valentine’s Day, and a rubber tree, because, as we may have already mentioned that they are pretty darn incredible.

And here are some of our favourites from other contestants.

So, what would you like to see? Let us know in the comments!