You make my heart skip a beat 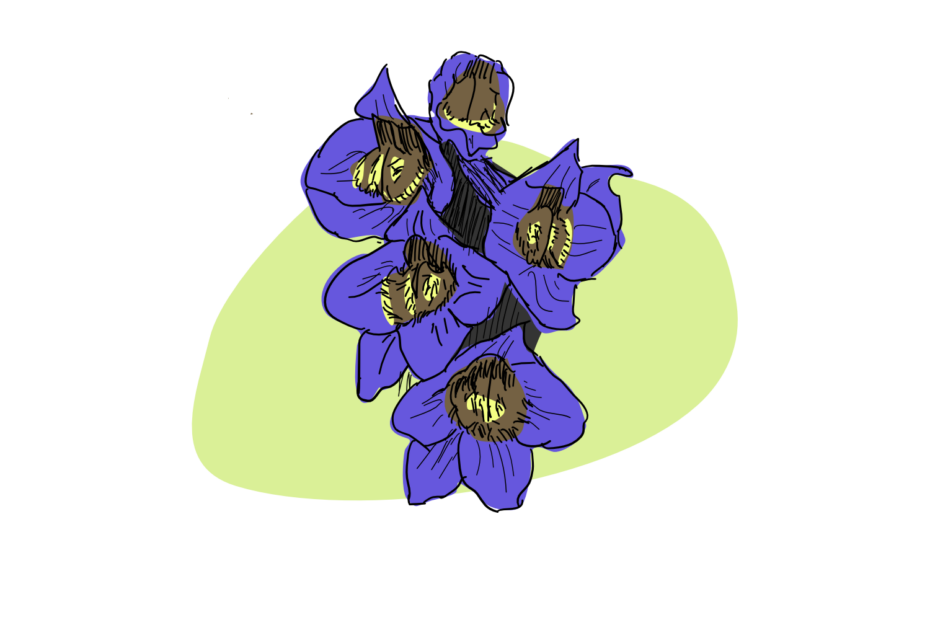 But it’s poisonous too!

In honour of the recent Valentine’s day, and the recording of our soon-to-be-released Plant Book Club episode on Plants that Kill*.

I have a friend who has a passion for blue – specifically blue that’s found in plants. His reasoning is undoubtably part subjective; blue after all, is a very pleasant colour. But it’s also incredibly objective, even pragmatic.

Blue colouring is rare in plants with less than 10% of flowering plants opting to deck their petal in sky-blue hues. And everyone knows that rarity increases value. Moreover, while the chemical pigments required to make flowers green (chlorophyll), or orange and yellow (carotenoids) are generally already being made by the plant due to both being required for photosynthesis, making blue requires dedication, energy, and even specialised enzymes.

So it’s not surprising that my friend, a highly discerning plant biologist, has a special love for plants that go that extra effort to make blue.

One of the most ‘notably blue’ plant genuses is Delphinium, commonly called larkspurs. The larkspur genus contains about 300 species, not all of which are blue (some are purple, pink or white). As a group, they have a reputation not just for beauty, but also for being poisonous. As it turns out, some of the bluest of flowers have more than one way to make your heart skip a beat.

Larkspurs contain a type of molecule known as norditerpene alkaloids, which are also found in their cousin species the aconites (think wolfsbane, which we’ve mentioned in our ‘scariest plants‘ list). All parts of the plant are toxic, and can cause symptoms in humans ranging from skin irritation to ‘digestive discomfort’ to death. They can also be a risk to cattle, particularly those that graze at higher elevations where the plants are usually found.

At the molecular level, the poisonous alkaloids work by interfering with special transport channels in the cellular membranes of neurons, skeletal muscles and cardiac muscles. These channels need to open and close rapidly in order to do their job, but binding of the poison blocks them in an open state, ultimately disrupting the system. In cardiac tissue, this can cause arrhythmias (disrupted heart rhythm), that can cause death.

Although it is possible to be poisoned not only by eating the plants but also by by excessive handling of them (a real risk to florists), you’ll ultimately be fine if you look but don’t touch.

But for those of you who love blue but aren’t so great at keeping your hands to yourselves, you might be happy to know that the blue colouring is not linked to the poisonous effect, but instead comes from a different compound named delphinidin. Which means that we can ultimately probably get this blue without the scary twist. So your heart can still be stopped… but only in the metaphoric way.

PS: you can read more about plant poison here.

our latest Plant Book Club podcast on this book will be out later this week. You can find our previous episodes here, or by searching for The Plant Book Club on your favourite podcatcher.