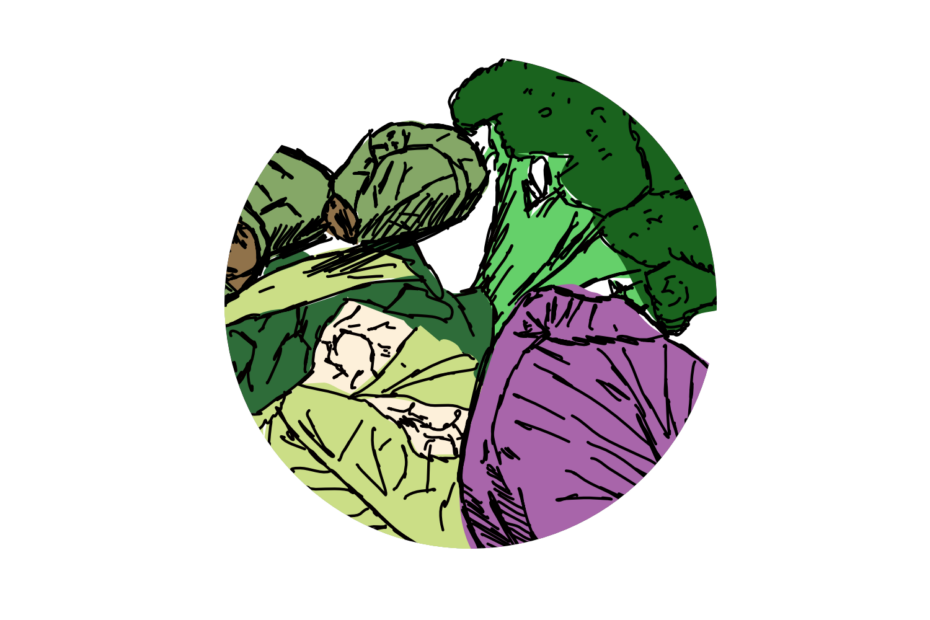 It began with a Christmas Card, which only caught my eye because of the Penguins.* But the penguins were holding a small placard – the protesting kind, and the placard read ‘down with sprouts’.

*Penguins are the greatest. It goes Plants, Cats, Penguins. Although some penguins are probably even better than some cats.

I didn’t understand, but I was hooked… and soon I started seeing sprouts everywhere in London. Not just small ‘sprout trees’ sold at the farmers’ market, but also sprouts on Christmas wrapping paper, and even a shiny sprout Christmas ornament, not unlike the infamous ‘German’ Pickle.

According to one source, in Britain, as far as ‘vegetation associated with Christmas’, sprouts come second only to the tree itself. It almost makes me feel bad that we left this post until so very late in the advent. (Although, to rectify the issue, Joram and I have decided that we can/must/SHALL write at least two articles on this most humble yet noble of vegetables.)

Sprouts didn’t really become a huge thing in Britain until the 19th century, but now, apparently, the Brits eat more of the tiny cabbages than any other county in Europe!

As evidenced by the Protesting Penguins, not all members of the population are particularly pleased by this cultural tradition. There’s a clear divide between the pro- and anti- sprout camp, and, as a sprout-skeptic myself, I can’t help but notice that the majority of Christmas recipes involve disguising the identity of the little green balls as much as possible.

(The trick, perhaps unsurprisingly, is to simply smother the sprouts in bacon).

The reason for their link to Christmas seems to be mostly seasonal- up here in the cold north, you’re pretty much relying on cabbage relatives to get you through the winter. If the choice is sprouts or scurvy, I guess most of us would go green.

Still, if you’re amongst the many of us who don’t like sprouts and have also realised that Orange Juice is now a thing that exists in the world, we’re here to suggest a ‘distract them with science method’.

You can share with your friends the fact that brussels sprouts are just cabbage. And cabbage is just kale, and kale is just broccoli, which in turn is just kohlrabi, gai lan, savoy and collard greens.

As it turns out, all of these edible plants (and several more), are members of the same plant species- Brassica oleracea. But, as has happened with many of the other crops we eat, B. oleracea has undergone intensive cultivation- in this case, since at least before the times of the Romans and Greeks. Over a few thousands of years, by selecting different individuals with certain types of leaves, buds, stems and inflorescences, humans have turned the original wild species into many different ‘cultivars‘ or ‘varieties’- making the many cabagge-y products we can find today.

So if you don’t like brussels sprouts, but do enjoy a nice romanesco, my suggestion is to use the science to convince your family to make the swap (personally, I’d take broccolini over sprouts any day of the year).

Alternatively, your only hope is to open up the floor for scientific debate, and then while everyone’s distracted, sweep the little green terrors into your napkin!

This post is part of our advent calendar. You can find all other posts here.