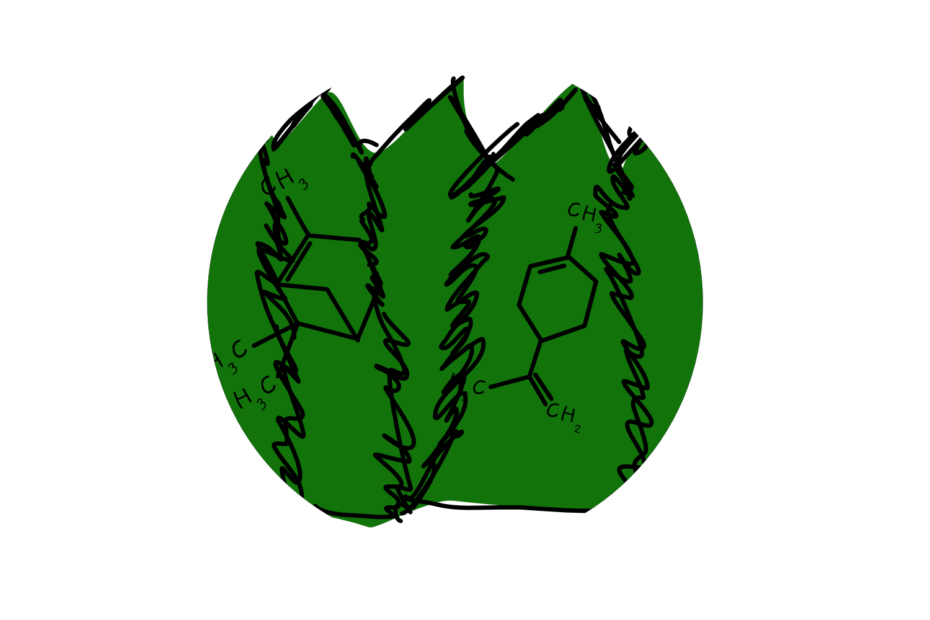 Nothing induces memories quite like smells. Especially in winter, different smells trigger warm emotional responses: the smell of cotton candy, fried sausages and cheap mulled wine makes people reminiscence of Christmas markets. The smell of pine gives us that lovely feeling of sitting in front of a Christmas tree on a cold but exciting morning. Let‘s have a look at what makes that smell.

When trees are hurt, they emit a sap to seal the wound and fend off any intruders, like fungi or bugs. Conifers have an especially sticky sap and to make it even more effective, it is laced with a number of chemicals called terpenes. Terpenes are small carbohydrate compounds made of two or more isoprenes (which are C5H8 carbohydrates). Depending on the composition terpenes can be short or very long polymers. Two short terpenes are characteristic for the smell of pines: pinene and limonene.

Terpenes in general are often considered as a possible replacement for oil-derived organic carbon compounds. And also the small, fragrant terpenes are useful: First of all, they smell nice and are part of things like candles, and second of all they can also be used as biocides. The tree makes them to fight of bugs and so it is no surprise that limonene finds application as spray-on pesticide.

That‘s not all that terpenes do, however. A study published in Nature by Ehn et al. in 2014 investigated the role of volatile limonene and pinene above pine forests. On warm days, the terpenes can form aerosols that rise above the tree canopy. The aerosol itself can absorb sunlight which in turn doesn‘t reach the trees anymore. What‘s really cool however (cool as in cooling), is that the aerosols are believed to serve as condensation nuclei that form clouds. Gaseous water in the air attaches to the terpene droplets and becomes liquid: a cloud is formed. The clouds in turn help to cool down the forest even further.

Understanding the link between terpene aerosols and cloud formation helps in creating better climate models. The researchers behind the study also suggest that rising temperatures will increase the effect of aerosol induced cloud formation which might have a dampening of effect on global heating. It will not stop or reverse the temperature rise but it might reduce its effects on conifer forests.

Terpenes from pines do many things. They fight of bugs and fungi and help to cool down forests. Above all, however, they smell really nice.

This is a good summary on bbc.com of the Nature study, which is closed access.

This post is part of our advent calendar. You can find all posts here.