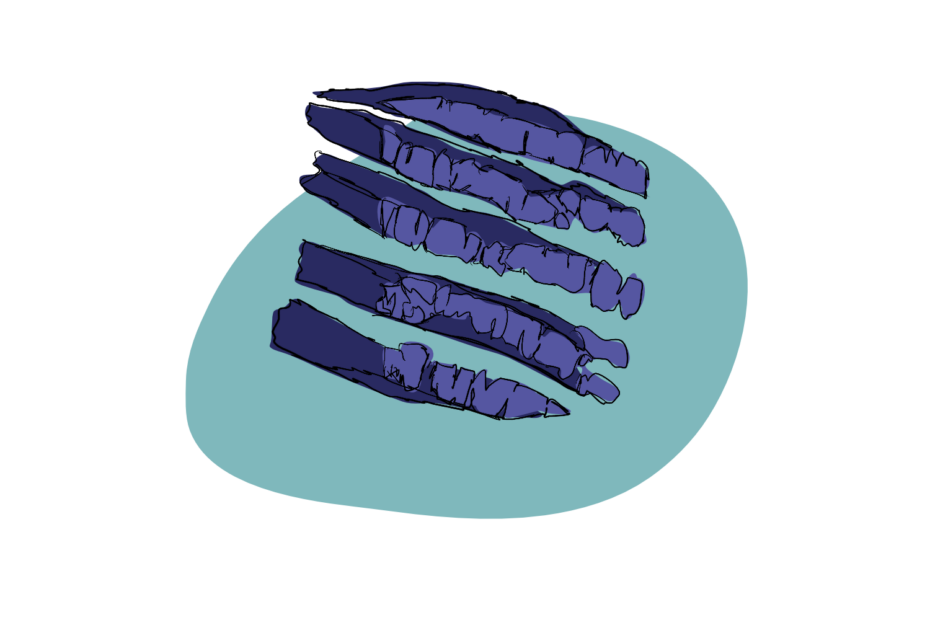 Despite this planet we live on being largely blue, when it comes to plants, we don’t see a lot of the colour. Violets are blue, sure, as are blueberries (it’s right there in the name). But roses are red, and daisies are yellow, and the leafy bits of plants, for the most part – tend to be green. Blue, as it happens, is just not the easiest colour for plants to make. So most of them simply don’t bother.

But a common mediterannean plant, Viburnum tinus, makes blue fruits that are so vibrant and shiny, that would make Eiffel 65 sit up and listen (da bu dee da bu dai), could induce Australian bower birds to flock from the other side of the world (if only they knew), and could make old Mickey Blue eyes* wonder if he was really so special after all.

Here’s how they do it.

*I have not seen that film but I assume it is about Hugh Grant having really blue eyes????

Plants are generally pretty great at making colours, a process which, at the molecular level, involves the creative  expression of specialised pigments. Want some green? All you need is chlorophyll. For oranges and yellows you can mix and match carotenoids. For pinks, reds and purples, you simply make and modify anthocyanins. And with those colours at hand, some simple artistic blending can give you a shot at nearly everything in the visible range. But not blue. True blue is hard to make, because there isn’t a simple common pigment found across the plant kingdom that can produce a brilliant blue.

This isn’t to say that some plants haven’t found work-arounds. Plants are nothing if not inventive. Careful modification of red-purple anthocyanins can get plants pretty close to blue on the spectrum. By mixing pigments, chemically modifying the pigment structures, and carefully tweaking pH within cellular compartments, plants can almost get there. One type of modified anthocyanin, called delphinidin, lives up to its dolphin-y name: lending a blue hue to flowers in the Viola (violet) and Delphinium genus their hue, as well as Cabernet Sauvignon grapes, pomegranate, cranberries and bilberries. A further modified version of Delphinidin, called Malvidin helps the blue pimpernel flower (Anagallis monelli) shine.

So it can be done.

But if you want to take it to the next level, you’re going to need more than just a pigment.

Viburnum tinus, commonly called laurustinus, is a widely cultivated shrub that has fairly standard leaves (they look like laurel leaves, thus the name). It has pale pink buds and off-white flowers that could generally be described as inoffensive or notable. And it produces berries of the most brilliant, metallic blue.

For some time, it was assumed that V. tinus must also be using anthocyanins to reach out into the blue. And in some ways there’s a truth to this – the centre of the fruits are indeed filled with dark anthocyanins. But these pigments are more of a dark red colour, and their colour function seems to be that of a backboard, preventing any light from entering the fruit and then bouncing back out again (backscattering), a function that allows the brilliant blue hues on the outside of the fruit to truly shine. The blue colouring, found in the epicarp, or outer skin of the fruit, isn’t caused by a pigment, but is caused by reflection. Which in turn, is defined by special structures within the skin that selectively reflect blue wavelengths.

In order to better understand the nature of this structural colour, Rox Middleton, Miranda Sinnott-Armstrong and colleagues used high powered electron microscopy techniques to stare into the secrets of V. tinus’s epicarp. There, within the plant cell walls, they found tiny structures of connected small vesicles, running parallel to the surface of the fruit. Three dimensional imaging of these globules revealed a complex multilayered structure, which subsequent computer modelling suggested would be sufficient to produce the wide-angle blue scattering that gives the berries their brilliance.

By way of several chemical experiments, including exposure of the fruit skins and their structures to fat-dissolving (non-polar) solvents, and incubation with the lipid-binding heavy metal osmium tetroxide, the scientists could ascertain that the mirror-like structures were composed of lipids.

Lipids is the broad term for a wide range of molecules, which includes things from oils to fats to waxes. While waxes are largely indigestible, oils and fats – which the scientists suggest are the building blocks of their structural blues – are considered a valuable nutritional resource.

This in turn, might be part of the true meaning behind the blue berries. V. titus berries are eaten by a range of european birds, which ultimately ‘pass’ the plant’s seed, allowing offspring to grown in distant lands. The blue colour of the fruit falls within the visually relevant range for birds, meaning that the colouration might act as an important attractant. The blue-reflecting lipids may be  an important source of calories for the birds, so the colouration is an honest signal sent out to the flighty foragers, with colour and calories coming from the same lipid source. Because healthier birds can probably fly further, the signal benefits both parties – bird and plant.

Although these specific disordered lipid multilayers have not been previously described, other species of plants do use structures, as opposed to pigments, to colour their fruits. Previously, the fruits of the Australian ‘blue nun’ (Delarbrea michieana) were shown to have bubble like structures, termed iridosomes, that gave them their hue. Similarly, a study in the 90s found the also-aussie Blue Quandong (Elaeocarpus angustifolius) fruit’s colour comes from the structure of the epidermis – although the blue colouring in 25 other studied species was linked back to anthocyanins. What’s more, the use of structural colouring isn’t a feature only of the plant kingdom, but can also be seen in the feathers of peacocks, the jeweled tones of beetles, and the scales of butterflies.  Which makes it clear that painting with structures, instead of pigments, is something that the natural world has worked out long before us.