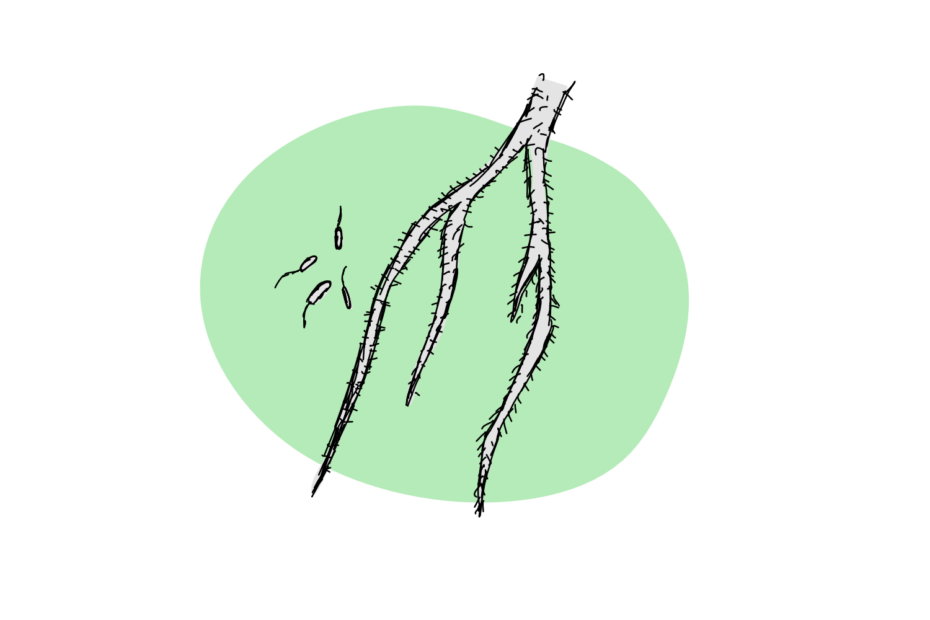 We are surrounded by nitrogen.

The important life processes of photosynthesis and respiration revolve heavily around oxygen and carbon dioxide, but it’s nitrogen gas (N2) that makes up 78% of the air. This actually could be great, both plants and animals also need nitrogen to survive. It’s used in the amino acids that make our proteins, in the nucleic acids DNA and RNA. There’s even a little bit found in chlorophyll.

But that 78% hanging around us in the air just happens to be fixed in an inaccessible form. Although all living things- especially plants- really would like to get their  leaves on more of that sweet nitrogen, the secret to its extraction lies nearly entirely in the minds of the microrganisms.

Earth’s atmosphere is mostly nitrogen because of the physical chemistry of the element: almost all compounds containing nitrogen eventually release it as a gas in their life cycle and once released it really doesn’t like to interact with much. Nitrogen is very nearly inert- meaning that chemically, it’s pretty inactive. Meaning it is unscathed even by solar radiation that triggers all kinds of excitement in other elements.

The bitter irony is, however, that all living things rely on biologically available nitrogen. The N atom is found in DNA, all amino acids and therefore proteins and in many metabolites. In short: without bio-available nitrogen, nothing could live.

Luckily, that untouchable gaseous nitrogen form cannot resist the advances of certain microorganisms. Where others fail, they are able to coax and convert the reluctant nitrogen gas into biologically useful nitrogen compounds.

The natural cycle goes something like this: some bacteria take nitrogen gas and make ammonia and other nitrogen containing compounds. Other microorganisms and plants use the nitrogen compounds to grow. Animals (us included) eat plants to get nitrogen compounds (the majority are taken up from plant proteins at this point). When we die, decomposition of our molecules eventually results in the release nitrogen gas back into the atmosphere.

You might have spotted our favourite class of organisms in this description: plants. Plants rely on nitrogen compounds to grow. They mostly take it from where microorganisms have left it in the soil, although some weirdos like to play chaos with this ‘natural order’, skip a few steps, and go straight to snacking on insects (particularly when soil nitrogen supply is poor).

Nitrogen supply is so important that- for modern agriculture to work productively- we have to artificially supplement plants in the form of fertiliser. In 2019, we dumped almost 187 million tonnes of ammonia on our fields so that our crops could take it and grow. Without chemical fertiliser, soils would be quickly depleted of nitrogen, as well as several other essential elements like potassium and phosphorous. But dumping all that nitrogen comes at a cost, with nitrogen pollution representing a serious environmental hazard.

Not all plants require external supply of ammonia, though. Legumes – soybean, peanuts, lentils, chickpeas to name just a few – have found a supplier for their needs. They grow in symbiosis with nitrogen fixing soil bacteria, often those of the group Rhizobia. This plant-bacteria trade deal consists of a steady supply of ammonia to the plant in exchange for the bacteria receiving carbohydrates and a comfortable place to live. Legumes create root nodules that Rhizobia happily move into. Once settled in, they turn on the nitrogen fixation and both legume and bacteria happily grow.

There is a good reason why only few microorganisms evolved to fix nitrogen: the high cost of turning nitrogen gas into ammonia. About 40 ATP molecules are used to make just one 1 molecule of ammonia- quite a costly process given that breaking down an entire molecule of glucose during aerobic respiration makes a maximum of 38 ATPs. That’s why even Rhizobia only turn on nitrogen fixation once they’re comfortably settled in the nodules and have a steady supply of energy.

Another problem is oxygen. The compounds involved in nitrogen fixation, namely the nitrogenase enzyme, are very sensitive to oxygen. If these enzymes interact with, and react with oxygen (get oxidised), they’re done for. The cell has to rebuild its nitrogen fixing infrastructure. So Rhizobia and other nitrogen fixing microorganisms usually like to live in places that are almost completely devoid of oxygen. Like sheltered bumpy nodules in the roots of plants, or deep down in the sludges of the soil.

So, yeah, nitrogen fixation is important but also really hard. Even fixing nitrogen chemically, instead of biochemically, requires a tonne of energy. The process needs high temperature and high pressure and uses fossil fuels to generate the required hydrogen (which then combines with nitrogen to ammonia in the Haber-Bosch process).

Wouldn’t it be nice if we could get more plants to be like legumes instead? If they get their ammonia from bacteria we don’t have to supply it to them in fertilisers anymore.

Cereals – corn, wheat, rice – don’t have root nodules that house Rhizobia (there are researchers trying to change that but that’s a story for another day). The roots are far from empty, though, a number of soil bacteria species live on and in cereal roots. But those bacteria don’t know how to fix nitrogen.

Or at least they didn’t, until Min-Hyung Ryu and colleagues taught them.

In their study, published in Nature Microbiology last December, they systematically analysed the genetic clusters responsible for nitrogen fixation (called nif clusters) in several species. They selected 10 clusters from nitrogen fixing species, that might be taken and put in other bacteria. The choice for those species fell on E. coli, a microbiologist’s favourite lab rat, Pseudomonas protegens Pf–5, which lives on the surface of wheat roots, and Rhizobium sp. IRBG74, which lives within those roots. Amazingly, just by expressing some of the nif clusters in these organisms, they could establish nitrogen fixation. Hooray!

Well… with a caveat. E. coli did great until there was some ammonia which resulted in a negative feedback loop and shut the process down. E. coli has also hardly any agronomical value as it is not a soil but a gut bacterium. P. protegens Pf–5 did fine as well, but at a fraction of the activity of E. coli.

What was needed was more precise and thorough control of the nitrogen fixation while also making the process more oxygen tolerant. So Ryu et al. cleverly combined parts of different nif clusters to create new, more robust combinations. In the end, P. protegens Pf–5 was able to fix nitrogen as well as natural Rhizobia, tolerate up to 1% of oxygen and was not inhibited by ammonia. And the researchers even found a solution for the problem of high cost to the bacterial metabolism: by inducing the entire cluster only under certain conditions, they could turn nitrogen fixation on and off at will. They suggested triggering nitrogen fixation by spraying conventional chemicals for plant protection or even by sensing natural root exudates like specific carbohydrates and plant hormones.

As if that wasn’t enough, the authors also had one last idea (albeit not demonstrated in the paper) that’s really quite cool: the researchers suggest to engineer plants to exude specific, non-native carbohydrates like opines in their roots. They then want to engineer the soil bacterium to be able to live off that weird carbon compound – which would create a synthetic symbiosis between both organisms. Such a system could potentially boost crop yields, reduce fertiliser use and avoid the risk of fixing too much ammonia in the soil for other weeds to grow.

Of course, before we could use a system like that we not only would have to develop it and test its capabilities, we would also have to think about biosafety. Releasing genetically modified bacteria into the wild is usually a big No-No in biosafety protocols, although it has been done in the past for agriculture, bioremediation and other uses.

A general introduction to nitrogen fixing in legumes