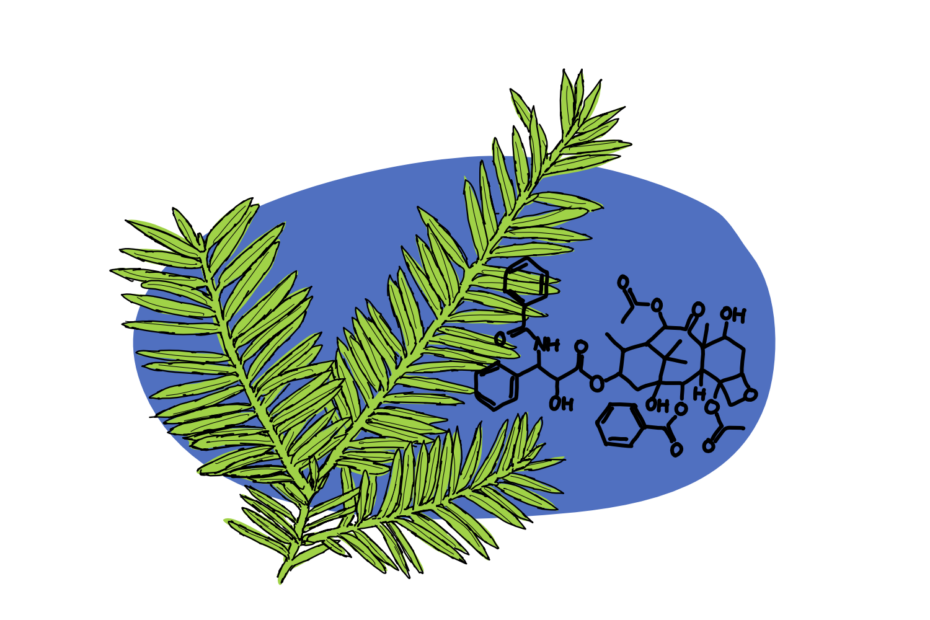 We’ve sung their praises before, and we’ll do it again: plants make the oxygen we breathe, the food we eat, the fibres that form our clothing, our fuel, and our shelters. Plus they’re just so darn pretty. But one of the things we mention perhaps less often, is that these glorious greens are not only there for us in the good times, they’ve also got us covered in the bad. Today we’re starting a new series, where we discuss some of the amazing (scientifically supported) medicines that have been developed from planty products.

Up first is Pacific Yew, and the anti-cancer substance it stores in its bark: paclitaxel.

A large proportion of the drugs used by humans have active components that are originally made by plants. Even though synthetic development of medicinal molecules is becoming more and more possible, as recently as the late 90s nearly 3/4 of the top 150 prescription meds in the US were plant derived.

The story of paclitaxel begins way back in the 1950s. Think poodle skirts, the start of the Korean war, and generally shitty times for pretty much any minority. Over in the US, the government set up the Cancer Chemotherapy National Service Centre, which aimed to screen as many compounds as possible in a search for anticancer activity.

Although they focused on synthetic molecules, the scientists involved weren’t above turning to the plant world for help, and by 1960 were collecting about 1000 plant species a year for testing. In 1962, a botanist happened to harvest some bark from the Pacific Yew, and two years later it was found to be cytotoxic (kills living cells).

It took several years to isolate the pure substance – paclitaxel – from the Yew’s bark, and several more years to elucidate the structure of that molecule. Which, actually, is an incredibly impressive feat, given paclitaxel’s ridiculously complex structure. Making the molecule requires 19 synthesis steps in the plant, and to this day there remains some uncertainty regarding the progression of these steps – we do know however that there are several parallel synthesis routes, as well as multiple dead-ends which result in inactive compounds! Plus, several of the enzymes involved in the process still require proper characterisation.

Anyway, back to the past!

Going from ‘kills cells in a petri dish’ to ‘might actually work as a cancer treatment’ tends to take a few years. It wasn’t until 1977 that paclitaxel was confirmed to have antitumor activity in mice, and its mechanisms – as an inhibitor of mitosis – was only fully realised by 1979.

As it turns out, paclitaxel binds to tubulin, one of the major components of the internal cell scaffolding systems. As well as general support, tubulin – which gets together to form stringy microtubules – plays a major role in pulling chromosomes to the edges of the cells during mitosis. Paclitaxel prevents microtubules from disintegrating at a stage of mitosis when they pretty urgently need to be gone, and thus blocks the cell from moving onto the next mitotic stage. Ultimately, all of this blocking triggers cell death. The specific role in cancer treatments is simply due to the fact that cancer cells divide a lot more often – it’s the feature that makes them so dangerous. So, paclitaxel stops them in their tracks.

By the quite-late 70s, paclitaxel was pretty well supported as an anticancer agent. Over a decade later, it finally became FDA approved, for use against ovarian cancer (1992) and metastatic breast cancer (1994). It is now used, primarily under the brand name ‘taxol’, in various other cancer treatments. Plus, the anti-cell proliferation feature has more recently been shown to help prevent the development of scar tissue, a particularly useful feature when it comes to stoping the progressive narrowing of internal (heart or arterial) stents.

We mentioned at the top that paclitaxel was originally found in the bark of the pacific yew. Which ok, is not a herb, but in fact a pretty big tree, of the scientific name Taxus brevifolia. (We’ve actually mentioned in podcast before). And in the early years – from late 1960s to early 90s – almost all of the world’s paclitaxel was derived from that tree’s bark.

Unfortunately, ripping the bark off the tree is not something that T. brevifolia particularly enjoys. The harvesting process kills the tree, and three tree deaths only equals about 1 gram of paclitaxel. For a while there, things started to look pretty grim for the pacific yew. Scientists tried getting paclitaxel out of other Taxus species, but the yields were generally low and pretty unpredictable.

One of the first big breakthroughs in paclitaxel synthesis was the development of a semisynthetic route, in 1988. Instead of doing the whole thing chemically (did we mention already how complex this molecule is?), scientists developed a method in which precursor products in the related European yew species were used to make the final valuable compounds. In the following years, the process was altered to give higher yield, and, eventually, in the late 90s and early 2000s, methods were developed that allowed complete paclitaxel synthesis by microbial fermentation or in cell cultures.

Also in the early 2000s, the first generic version of paclitaxel came to market, increasing its availability, and reducing its cost for the many who need it.

Whether it is an herb or an actual tree, plants are brim-ful of biochemical compounds. The pacific yew probably doesn’t care too much about a treatment for cancer and rather relies on paclitaxel to fend off herbivores by stopping their cell division. And, as we see so often, the plant’s attempt of being left alone is actually the main reason we, as humans, are interested in it.

Shoutout to my beloved friend PFT, who studied a different plant-derived medicinal compound – that we’ll definitely feature in the future – who indirectly inspired this series.

1 thought on “Healing Herbs I – Paclitaxel”