Here to stay – the CRISPR/Cas9 system 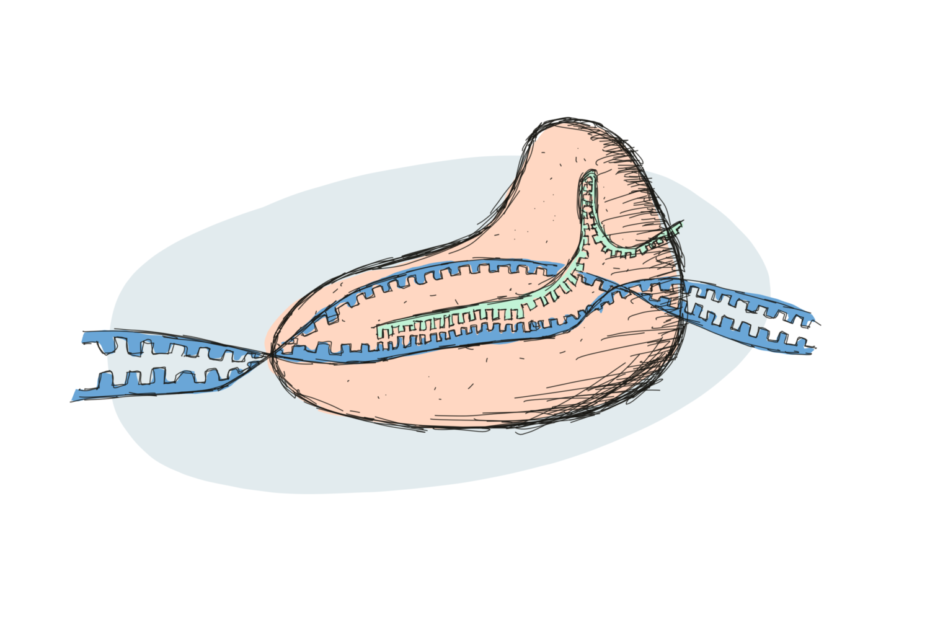 Very few scientific methods manage to jump from the world of molecular research into popular knowledge.

Detectives on TV put a swab from a crime scene into a DNA sequencer and – bingo! – the culprit is found. On the next channel, in a disastrous case of ‘genetic engineering gone wrong’, a monster roams New York City!

Seen it all? Well scientists have come up with a hot new method to fill tomorrow’s movie plots: CRISPR/Cas9 is here to stay!

First, let’s have a look at CRISPR/Cas9: What is it and why do researchers care so much about it?

CRISPR/Cas9 is often referred to as just CRISPR. Technically speaking however, CRISPR describes only half of the system. And the CRISPR/Cas system was not invented by scientists but by … bacteria! CRISPR is part of the bacterial defence against viruses – a kind of bacterial immune system. Following a viral infection, bacteria copy some of the viral DNA, storing it in their own genome as a kind of post-it note to remind them how to recognise future viruses.

The viral DNA is then used by the bacteria to produce CRISPR RNA that perfectly recognises and matches with any new and nasty viral DNA of the same kind. But recognition alone isn’t enough! The bacteria link their new CRISPR RNA system to certain proteins, called CRISPR-associated proteins, or Cas proteins. These proteins, when led to the right target, are responsible for chopping it into harmless pieces.

The bacterial system works in principle not unlike our human immune system where a threat is first detected, the information is stored and upon seeing it for a second time the system fends off the threat.

Turning a bacterial process into a tool

A number of researchers studied the bacterial processes around CRISPR for many years but it was Jennifer Doudna and Emmanuelle Charpentier who managed to turn the cellular mechanism into the CRISPR/Cas9 system we know today. The original bacterial system required multiple RNA molecules in order to function, but by fusing several parts together, they created a single piece of RNA (they call it guideRNA). This they coupled to Cas9, which can cut all the way through a piece of DNA.

In the end, they created a powerful and easy-to-use tool to introduce changes in the genetic code at specific locations… in a whole range of (non-viral!) organisms!!

After CRISPR/Cas9 locates and cuts the DNA, the cell tries to repair the damage. This repair however is prone to errors – sometimes single letters (we call them base pairs) of the genetic code get lost in the process. In most cases, these point mutations can not be distinguished from a random mutation caused for example by UV radiation from sun light. But the changes may be enough to change or completely destroy the function of entire genes.

And it goes further than that: researchers can couple other enzymes than Cas9 to the guideRNA. Depending on the enzyme, the mutation introduced can cut all the way through the DNA (a double strand break), only cut halfway through (a single strand break) or modify the genetic information in other, more complex, ways. The beauty of the CRISPR system is its versatility.

But wait, there’s more! If you use two or more guideRNAs at the same time it is possible to cut out large (or small!) pieces of DNA. Often researchers want to just delete a part of a protein that might contain certain activity, without completely destroying the entire protein. By creating several carefully guided CRISPR/Cas9 cuts in one go they can achieve exactly that.

Essentially, CRISPR allows to specifically target a stretch of DNA and mutate it. Targeted mutations are the gold standard for any genetic modification.

And we’re still not finished. CRISPR offers new ways to manipulate old and new model organisms. As long as you know the target sequence and can somehow get the guideRNA and the Cas9 enzyme into your organism you can use CRISPR/Cas9. Studying obscure species just became a whole lot easier.

CRISPR/Cas9 and related systems are already boosting basic research today. Like the PCR, CRISPR will enrich the existing tool boxes enabling researchers to understand the world yet another tiny bit better.

Obviously, not everything that shines is gold. The often proclaimed precision of CRISPR has come under debate with research suggesting that off-target effects – targeting by the guideRNA to non-target regions – also occur when using CRISPR/Cas9. This doesn’t come as a big surprise to most biologists: hardly any biological system is 100% accurate and CRISPR/Cas9 is no exception.

The crux is that those effects are very hard to identify as they are indistinguishable from random mutations. The search for them requires careful use of whole genome sequencing and subsequent bioinformatic analysis.

This too is an important part of research – constantly questioning even the most exciting and promising tools. We will likely see many more papers being published where CRISPR/Cas9 was used to answer questions, just as we will see papers questioning the powers of CRISPR.

This post part of a mini series on CRISPR/Cas9. In the next part, we will discuss the application side of CRISPR/Cas9. Stay tuned!

10 thoughts on “Here to stay – the CRISPR/Cas9 system”