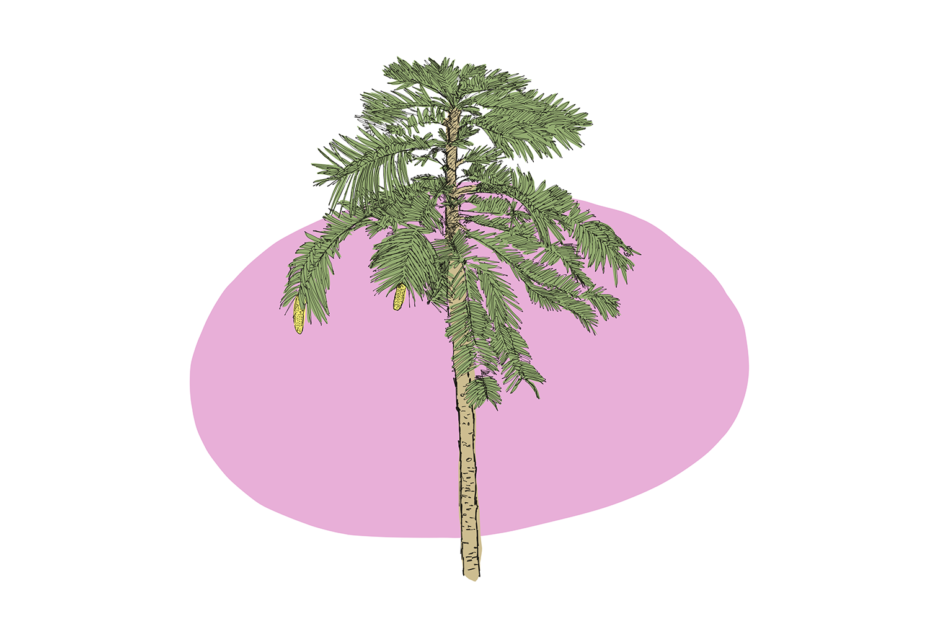 Last weekend, while snooping around the Copenhagen Botanical Garden, I ran into a fellow Australian. Wollemia nobilis, the stuff of coniferous-tree legends! A tree that stood still in time as dinosaurs walked the Earth and then perished, as tectonic plates shifted and reshaped the lands, and as the ice advanced and retreated. A tree that was lost, and then found… but even now remains hidden in a location known only to some chosen few. Here are some of my favourite facts about the Australian Wollemi pine.

Although Wollemia nobilis is commonly referred to as the Wollemi pine, it doesn’t belong to the pine genus (Pinus) or even family (Pinaceae). It’s more of a ‘pine- cousin’: they’re both conifers, a plant order that also contains larches, spruces, redwoods and yews.

Wollemi actually belongs to the family Araucariaceae, an ancient group of trees that dominated hard during the Jurassic times. Since then, the Araucariaceae family has fallen on somewhat rough times: it now consists of just three genera and about 40 species that are mostly confined to the southern hemisphere. The Wollemia, one of these three genera, is monotypic, meaning the genus has only one species in it- our Wollemia nobilis. Despite not being a true Pinus pine, it does at least look a bit like one. And at least it’s more pine than pineapple is!

Wollemi has long been known from the fossil record, with specimens dating back to 200 million years ago. That’s early Jurassic times – before Stegossaurus and Brachiosaurus walked the land, and back when all of that land they walked on was a single mass – Pangea. Which is why Wollemi fossils have been found not only in Australia, but also in Chile and Argentinia. Wollemi did pretty well until about 40 million years ago, when it began to decline. And scientists thought that, as of about 2 mya, it was gone for good. But back in 1994, a group of men checking out canyons just north of Sydney found some trees with weird looking, ‘cocoa-pop’ bark. And rediscovered a living fossil.

The Wollemi pine seems to be pretty good at dealing with the things that nature throws at it. It can tolerate different light regimes, and both very high (45 °C) and pretty low (-5 °C) temperatures. This cold resilience may be due to the protecting nature of a waxy like substance that can cover the meristem – the fragile bud of the growing plant. Wollemi’s tricks to survive the wild world also include an ability to produce coppices- new shoots that can emerge from the lower tree trunk following damage of the main trunk by fire, winds or other elements. Wollemi can also reproduce sexually, but does so slowly: seeds take up to 20 months to mature. Meanwhile, an plants can live for 500 – 1000 years, suggesting that Wollemi knows it has all the time in the world.

4. Future prospects: A plant on the EDGE

The EDGE methods, a conservation tool that scores species based on how Evolutionary Distinct and Globally Endangered they are, ranked Wollemi as number one in the gymnosperm category. Which suggests that Wollemi is a top priority for conservation due to its abundance status and its value as a unique organism. Wollemi likely split from its closest relative over 50 million years ago, so there really isn’t anything like it on the planet. Although medium-scale cultivation began in 2006, and you can now buy your very own Wollemi for the botanical garden or backyard of your choice (only 300 Australian dollars for a 2m tree!), the tree remains incredibly rare. The single isolated wild population contains less than 100 individuals, and the genetic diversity- the differences between the individual trees within the population- is particularly low. This means the critically endangered population is under even greater threat: genetic diversity is what helps certain individuals in a population make it through the hard times when others fail. Wollemi is susceptible to infection by Phytophthora cinnamoni, a particularly virulent water mould that can maim and kill trees. Although care has been taken to hide the location of the wild population, in 2005 some wild Wollemi were found to be infected by Phytophthora, which was most likely tracked in by unauthorised tree tourists. Sometimes if you love something, the best thing you can do for it is leave it be.

Let’s hope this noble tree makes it through the next 200 million years!

One-stop shop for everything you need to know about the Wollemi pine.