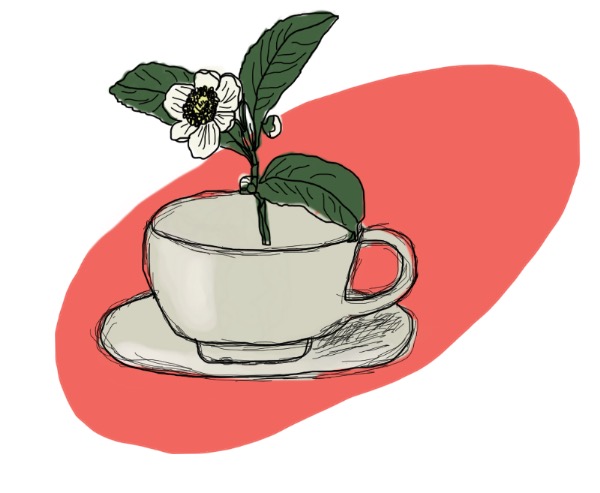 According to some people on the internet, today April 21st, is National Tea Day in my new adopted country (UK).

So why don’t you grab a hot cup of infused Camellia sinensis, and join us for our 4 favourite nerdy tea facts.

Fact 1: Tea is huge business, and has been for millenia

Tea drinking first began as a medicinal practice, in the south-western regions of China, where tea plants are endemic. In 2016, physical evidence of tea drinking, dating back to 200 BCE, was discovered in Emperor Jing of Han’s mausoleum- but best guesses suggest that tea drinking had been a thing in this region for about 3000-5000 years. During the Tang Dynasty (618-907 CE), the practice spread through China, and to Korea, Japan and Vietnam.

Nowadays, of course, tea drinking has spread throughout the world, and is widely cited as the second most popular drink, after water. To fuel this demand, tea is grown in 50 countries, with production reaching over 5 million tonnes per year. The market value in 2018 was 52 billion USD!

If you’re staring down into a cup of hot something that wasn’t made with the leaves of the Camelia sinensis, then what you’re drinking is NOT tea.

It may be coffee (Coffea arabica), it may be cocoa (Theobroma cacao), or maybe even hot sake (Oryza sativa). It might also be some hot beverage made from thistles or fennel or raspberries or marshmallows. Which would technically be a tisane.

We’re not going to judge you, unless you try to call something that doesn’t contain C. sinensis tea.

Fact 3: There are 2 main varieties of tea, but at least 6 ways of processing it.

The genomes of both the Assam type and the Chinese type have been reported in the last few years. Comparative analysis shows high sequence similarity- about 92% at the DNA level and 94% at the protein level- and suggests that the two varieties probably diverged from a common ancestor between 0.38 and 1.54 Mya.

As we drink it, tea can be found in at least 6 forms – all of which come from the same species, but which are processed in different ways. Briefly, white tea contains young leaves that are wilted, yet not oxidixed; green tea, and its more delicate cousin, yellow tea, are unwilted and unoxidised, oolong tea is wilted, bruised and partially oxidised, black tea is wilted and fully oxidised, and dark tea is green tea that has been allowed to ferment. Oxidisation, in which internal enzymes breakdown chlorophyll and release tannins, can be halted by heat-based deactivation of the enzymes.

Fact 4: Tea contains caffeine, catechins, and about 700 other bioactive compounds

Although it’s well known that tea contains caffeine, it also contains a bunch of other flavour-giving compounds. Catechins, the principle group of flavonoids found in tea, can make up to 12-24% of the dry weight in leaves, and lend tea its astringent taste. Theanine, and non-protein forming amino acid, instead gives an umami (savoury) taste, as well as a sweetness. In dried tea, it can account for more than 50% of the free amino acids and 2% of the dry weight. On top of this, the plants produces a wide variety of volatile terpenoids and glycosides, which provide the characteristic flavours and smells of teas.

Ok, that’s it, our four top nerdy tea facts. Let us know in the comments if we missed anything, and don’t forget to enjoy a hot or cold cup of Camellia sinensis to celebrate Tea Day!

I got a lot of information from this paper: