Not to stimulate cats, they said 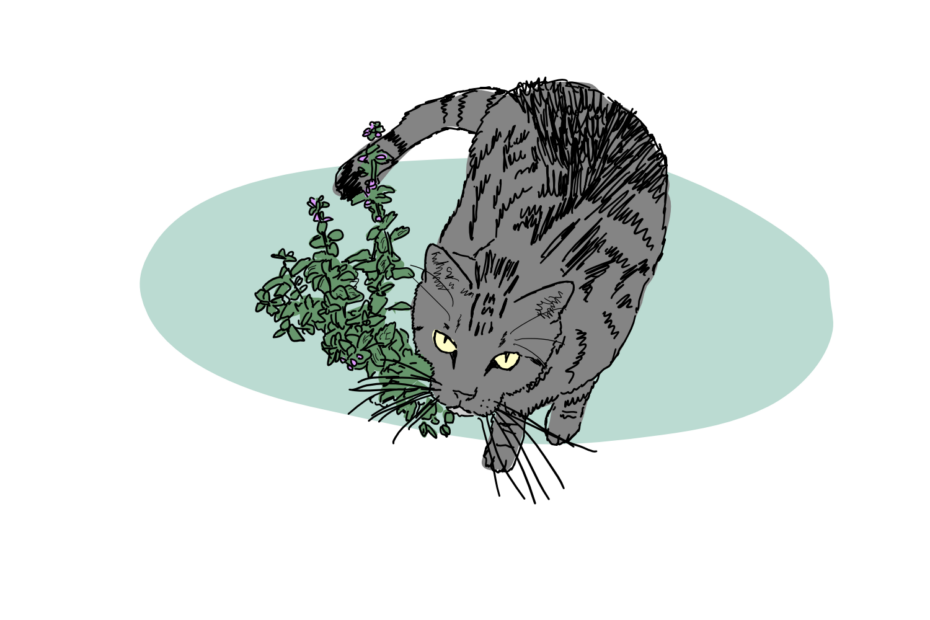 This post is inspired by two great friends. One, VL, who makes it her job to alert me of any and all of the cat-science news and sent around a paper about Cat Mint aka Nepeta spp., and the evolution of the chemicals – nepetalactones – that make cats go crazy.

And another, FM, who read this part of that paper’s abstract:

“Most likely, the adaptive function of nepetalactones in Nepeta is to protect against herbivorous insects, not to stimulate cats […]”

And responded jokingly that he preferred his science with a little less opinion.

So here’s the science.

You’ve probably heard of catmint or catnip, and know about its legendary ability to put cats of any kind – from kittens to lions to ocelots (I kid you not, they did the tests) – into a playful mood.

Catmint isn’t a specific species, but is instead the common name given to members of the genus Nepeta that make cat-crazyfying chemicals known as nepetalactones. (As quick aside, the Nepeta gets its name from an Italian town. We looked it up, and were disappointed to find that the town is famous for bottled water, and not for cats). The Nepeta genus in turn belongs to the Lamiaceae ‘mint’ family, which contains herbs like basil, mint, rosemary, sage, marjoram, oregano, thyme and lavender. Basically if you or your cat have ever rubbed a leaf and gone ‘mmm’, it’s probably a Lamiaceae*.

*We are not botanists, please do not learn botany from us. Lamiaceae also includes ornamental plants like Coleaus, as well as edibles like chia.

Anyway, some scientists – the ones with slightly firmer grips on reality than ourselves – believe that nepetalactones evolved as a way to protect plants against herbivorous insects. Nepetalactones are iridoids, a class of chemicals that typically act as defensive or protective compounds, and can repel insects almost as well as the synthetic repellant DEET.

Iridoid production is widespread in many plant families, including Lamiaceae, but the subclade of this family that includes Nepeta – called Nepetoideae – has historically lost their iridoid-producing power. Which means that, over evolutionary time, Lamiaceae worked out how to make irdoids, the subclade Nepetoideae forgot, and the Nepeta genus relearnt it.

In order to better understand how this re-evolution process might have occurred Benjamin R. Lichman and first sequenced the genome of two species that can produces the iridoids – Nepeta cataria and Nepeta mussinii, as well as a closely related species that cannot make the compound, Hyssopus officinalis (hyssop). They also searched the genome of the iridoid-producers for sequences that could encode enzymes similar to previously-identified iridoid biosynthetic enzymes and found several promising candidates.

Interestingly, one of the enzymes required for the multi-step iridoid biosynthetic process could not be found in the hyssop genome. Furthermore, the gene has, to date, not turned up in any transcriptomes or genomes of members of the Nepetoideae subclade, but is present in all other sequenced non-Nepetoideaes. What’s more, the Nepeta genus does have a copy of this gene – called iridoid synthase or ISY. But Nepeta’s ISY looks different from the others, strongly suggesting that the Nepeta ISY evolved separately.

To work out which gene products did what, the scientists then proceeded with some intense biochemical characterisation. Simplistically speaking, this involves getting the enzymes alone (usually by expressing and purifying from E. coli), and then throwing them together in different combinations with precursor metabolites to see what gets made.

One of the particularly cool things about genomes, is that sometimes genes that do similar things hang out in physically close locations. This isn’t a super common phenomena (although it happens more commonly in the bacterial world), and we’re not entirely sure what the point of it all is. But finding a small gathering of genes can be pretty helpful to researchers. In this case, the scientists couldn’t work out which enzyme was responsible for a certain reaction – although they knew the reaction had to take place to get the final product. As it turned out, the culprit was an unknown gene called MLPL, which just happened to be located within the stretch of known nepetalactone-synthesis genes!

As further investigation, which you can read about in full over here, the scientists looked to understand the specific activities of each enzyme within the plant, as opposed to within a test tube, and then investigated the specific (re-)evolution of iridoid synthesis in Nepeta. They show that nepetalactone synthesis in nepeta, as compared to the rest of the mint family, favours the production of volatile compounds, and also makes multiple slightly different chemical forms (stereoisomers), which may have diffeent insect-repelling functions.

All together, the story of how mint became catmint, opens our understanding of evolutionary biology, and the complex production of secondary metabolites. Plus, it involves cats. Which is pretty much our favourite kind of science.

Go read the original research, but.. if nothing else.. at least click through to see the kitty incorporated into Figure 2.