One hungry caterpillar, and the communication of vibrations. 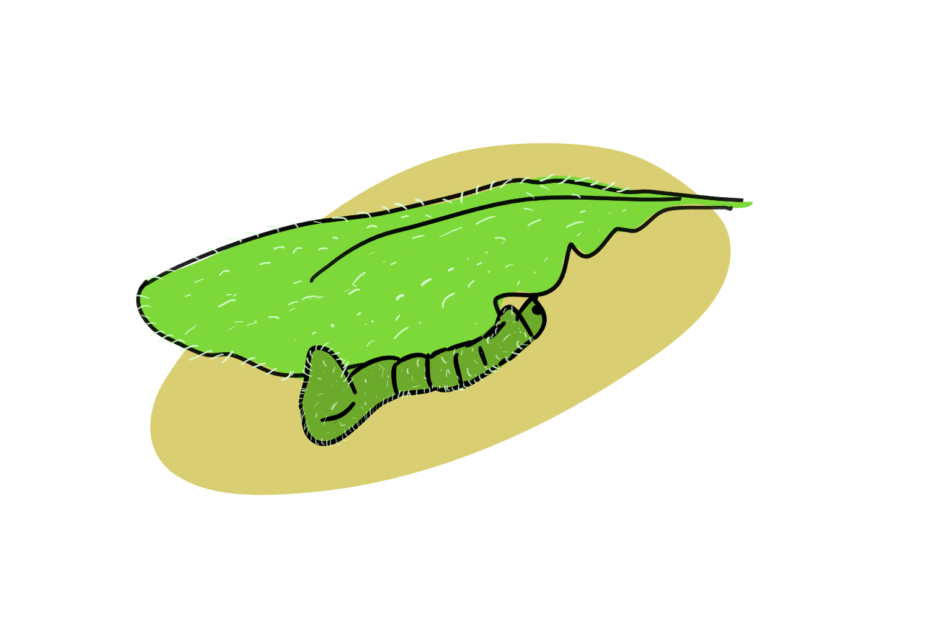 Plants are great listeners. Your average houseplant will happily spend hours hearing about your daily troubles, and won’t bat an eye if you sing Brittney’s ‘Toxic’ out of key for the best part of an hour. Out in the wild, this ‘listening’ has a more practical side- plants listen, by feeling sound vibrations on their leaves, for signs of attack. And when they hear the angry munchings of a hungry caterpillar, they prepare to fight for their lives!

When you look at the average plant, you might be inclined to think of it as a passive object, one which quietly grows while the world of people and animals plays out in scenes around it. Yet plants, like us, are constantly and actively working to survive in the world. They follow the sun’s position with their leaves to optimise light capture, open and close their stomatal pores in response to temperature and gas availability, and grow their roots towards nutrient or water rich areas in the soil.

And that’s just on a good day.

Should a predator approach, such as an insect choosing a plant as the perfect lunch option, all hell breaks loose as that plant activates its intricate defence system.

Plants defend themselves with chemicals that taste bad, or those that downright kill the predator who dares to munch on their leaves. It can be quite effective, but the production of these chemicals is also quite costly to the plant. So the defence systems are only triggered in times of need.

To figure out when exactly defence systems are go, plants react to a number of predator-related stimuli. The most obvious is cell wounding. When a caterpillar munches away, it destroys cell membranes, and this wounding triggers a chemical response at the location of the wound. On top of that, the caterpillar spit contains many ‘attack’ chemicals, which help it to break down the plant cell and fight the plant defences. These caterpillar chemicals also elicit a response from the plant, triggering additional defensive actions.

And as if this network response of wounding and caterpillar secretions are not complicated enough, a third trigger is sensed by the plant: micro-vibrations from chewing on the leaf.

Back in 2014, Appel and Cocroft studied the effects of caterpillar micro-vibrations on Arabidopsis’ chemical response. They used laser vibrometers to measure the tiniest of movement of the leaf while a caterpillar enjoyed its meal.

They found that the ‘sounds’ of the vibrations of caterpillar feeding are distinct in frequency and amplitude from other vibrations, like wind or insect songs. Next up, they recreated these vibrations electromechanically.

A piezo actuator (basically a specialised speaker for micro-vibrations) was tuned to exactly mimic the vibrations of a feasting caterpillar. By measuring the plant response to the vibrations alone, the scientists could separate the effects coming from vibration, from those responses to wounding or caterpillar chemicals.

They found a number of defence metabolites (the glucosinolates) were increased in the presence of vibration. This activation of glucosinolates before the actual feeding suggested that plants were readying themselves for the biting attacks. The vibrations were a kind of early warning system.

Still, some questions remained: what is the exact role of vibration in relation to the other signals – wounding and chemical signalling?

Phytohormones are signalling molecules that can induce reactions within a cell and within the entire plant. If one leaf gets nibbled on, sending phytohormone messages can encourage other leaves prepare to engage the caterpillar who will likely move to them once it’s done. Two very important defence-related phyotohormone pathways rely on jasmonic acid (JA) and salicylic acid (SA).

The volatile organic compounds (VOCs), on the other hand, mainly serve as signals to other plants around the attacked plant. You might already have heard of ethylene, a VOC that triggers ripening in fruit like bananas. In this study, the authors measured several VOCs that have been found to be involved in plant defence.

When they measured the plant response to vibration alone, they could observe a number of compounds increasing or decreasing as compared to silent – as in not vibrated – plants. But when plants were also triggered with wounding or caterpillar chemicals, the differences of adding some extra vibrations were mostly lost.

Which might make sense if the vibrations are mostly a milder prewarning version of the greater attack.

An interesting finding coming from the research was that the response to vibrations looked pretty similar to response seen another conditions stressful to plants: cold temperature. While still just a hypothesis, one reason might be that the sensing of both cold stress and vibration is done through the structural elements of a cell, the cytoskeleton and the cell membranes.

There are still some open questions: How exactly are the many different molecular signals integrated into a directed response? What part of the cell is sensing the vibration? How specific is the vibration pattern between different insects? Plenty of room for follow-up research using piezo-actuated leaf vibrations.

What we do know now is that plants get stressed when they feel a vibration on their leaf. They ‘hear’ that they, or their friends are being eaten alive …and they’re about to do something about it.

Check out both papers, they’re open access and have cool images of the experimental setup.

3 thoughts on “One hungry caterpillar, and the communication of vibrations.”