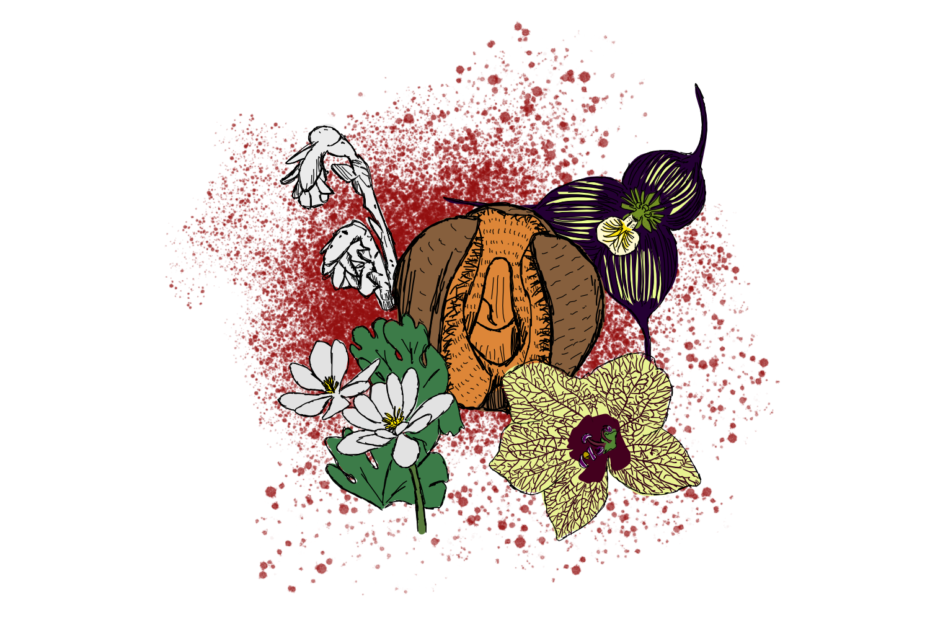 We thought we could stick to the spoooky theme this week, and present our favourite scary plants. Just as a disclaimer – we are well aware of (and a little bit sad about) the fact that some people will hear ‘scary plant’ and immediately thing ‘GMO’. But that’s not at all what this is about.

Instead, we’re focusing on the devious, the dangerous, and the deadly… a well as a couple of plants that just plain old smell like dung.

Look, we had to put this guy on the list simply has the coolest of names. Dracula is a genus of epiphytic (tree clinging) and terrestrial orchid species found in Central and Southern America, that get their name from their dark, nearly black or bloody red colouring. Also on theme – the orchids like to hang out in dark and cool places. Bonus ickiness points come from the mushroomy smell they emit to attract flies.

Scary Score: 2 out of 5. And they were lucky they even get that, given that they aren’t a threat to humans, and the flower of one Dracula species, D. sibundoyensis, looks like an incredibly cute monkey face.

Mandrake has long been believed to have mystical power, and has been previously been made into amulets to bring fortune and cure sterility. Despite its link to these generally good vibes, it makes the spooky list because it’s also believed to scream when pulled from the ground – with shrieks so startling as to not only immediately kill the hapless gardener, but also send their soul straight to hell.

On the slightly more scientific side, Mandragora species contain a tonne of biologically active alkaloids, which can also induce hallucinogenic and hypnotic effects. In case that sounds tempting, Mandragora consumption is highly poisonous, and can result in dizziness, headaches, vomiting, rapid heart rates, blurred vision, dilation of pupils, plus a very frustrating ‘difficulty in urinating’. I was previously used medicinally – to treat melancholy, convulsions and mania, and is supposed to excite delirium and madness. Oh, and if you use enough it’ll knock you unconscious. Given that the amount of active compounds is pretty variable from plant to plant, that fine line between temporarily out and permanently dead might be hard to find.

Scary Score: 5 out of 5. Mostly because it’s just generally cool and gets extra Harry Potter Points, but also because because I read a book about mandrake talismans as a kid that I really liked.

This one makes the list because it is a plan that literally produces red blood (sap). Plus, that blood is poisonous, due primarily to the fact theat it contains the also-awesomely-named toxin sanguinarine. Sanguinarine kills animal cells by blocking certain membrane transporters, and application to the skin can cause huge patches of dead scabby tissue (eschars). Taking bloodwort orally can result in vomiting and loss of consciousness.

Scary Score. 5 out of 5. Because it bleeds. Also because, as with many on the list, bloodwort is now sadly used in pseudomedicine.

These beautiful white spectres aren’t particularly scary, but get bonus points for being ghostly in name (Ghost pipes) and nature. They’re parasitic, meaning that they don’t have to bother photosynthesising themselves, but instead steal all of their energy from trees via a fungal network. The plant may have some anti-anxiety properties, which is kind of cute – like a ghost who doesn’t want to scare you too much.

Scary Score: 1 out of 5. But 5 out of 5 for beauty. Also, one halloween I will find some friends, and we will all dress up as Ghost Pipe Plants.

Black henbane or stinking nightshade is a member of the plant family Solanaceae, which, as well as containing household favourites like potato, tomato and eggplant, also include a whole lot of poisonous pals that belong on this list (see also, mandrake!). Henbane was used in ancient times medicinally as a sedative and analgesic, and can be hallucinogenic. Of course, it was also linked to magic and the dark arts. The priestess of Apollo used henbane to prep for oracle proclamations, and – slightly more ominously, it was used by necromancers to invoked the souls of the dead and demons. Witches used them to tap into their powers. What its use might actually be is a bit vague – apparently they can cause horniness, but also separate lovers. Oh, and if you’re a witch and you take some, it might give you strange dreams.

Scary Score: 3 out of 5. Bonus points for being used to flavour beer before the Bavarian Purity Laws came into Germany. Plus, the root name ‘hen’ apparently comes from death and not chicken, so that adds a bit of scare.

Honourable mention: Brugmansia species. Also belonging to the solanaceae family, also poisonous. They get props for having a misleading name- angel’s trumpet!

There are over 100 species of dodder, which is also known as ‘strangleweed’, due to its parasitic tendancy to swarm over other plants, insert itself into their vascular systems, and steal their water and nutrients. It murders a lot of plants, looks a bit like poor quality halloween cobwebs, and has a few extra special common names that include ‘devil’s guts’, devil’s ringlet’ and ‘witch’s hair’.

Scary Score: 3 out of 5. Bonus points given because it steals the genetic material of its host, and can be used by plant scientists both to understand this pilfering phenomenon, and to understand parasitism.

7. Hydnora africana – jakkalskos (Plus a few other plants that smell like faeces or death)

Also a parasitic plant, this guy makes the list not only because it emits a strong poo-y odour in order to attract dung beetles, but also because it looks pretty much as terrifying as a plant can look. We’ve featured this one on the podcast before, but strongly recommend you hit up google images to really get the visual down.

Honourable mention: Rafflesia arnoldii. Because it’s called ‘corpse flower’ (try to guess why), makes probably the biggest flower in the world, and also doesn’t seem to have a plastid genome (it’s a parasite).

Honourable mention: Amorphophallus plants. Because they also fit into the ‘just plain stinky’ category, plus A. titanum has the dubious honour of being called ‘voodoo lily’, ‘devil’s tongue’ and ‘corpse plant’.

Scary Score, 4 out of 5. They loose 1 point because in some ways they are too amazingly unique to be truly terrifying.

Most famous for its role in Socrates’ death, hemlock, also known as the ‘devil’s bread’ or ‘devil’s porridge’ remains a high player at the poison talbe to this day. Hemlock contains a variety of alkaloids, one of the major ones being coniine, which is similar to nicotine. It acts directly on the nervous system, and can result in muscular paralysis, respiratory collapse and death. Probably the worst thing about the plant – which was also used to deliberately kill prisoners in ancient Greece – is the fact that it looks like edible plants (carrot and parsley). So animals often eat it by accident.

Scary Score: 5 out of 5. Bonus points for being ‘the devil’s favourite plant’. Because we all need favourites. Also, the alkaloids are volatile, leading to the suggestion that some polinators are really into that. Minus 5 points for being called ‘Australian carrot fern’, which seems particularly unfair seeing as we didn’t even invent it. Not all poisonous things are from Australia you guys*. Final Score: 0 out of 5

Speeeeaking of Australia. The gympie gympie tree, also known as stinging brush, mulberry-leaved stinger or soicide plant, is found in the rainforests of north eastern Australia and is famous for – you guessed it – stinging. Contact with leaves cases hollow silica-tipped hairs to pierce the skin and release the neurotoxin moroidin. The sting from the hairs is extremely painful, and can last for hours to days, with recurrence possible months or more after – particularly if the tiny hairs aren’t removed intact. Clearing or cutting the plant may also result in the hairs becoming airborne. Bizarrely, the leaves are still eaten by several animals, and the plant even has fruit that are edible to humans – providing all the stinging hairs are removed.

Scary Score: 6 out of 5. Because most of them you have to actually eat to get poisoned, but this one you just have to walk past. Bonus points for having a remedy that actually involves application of hydrochloric acid (albeit diluted) to the skin.

10. Utricularia species – bladderwort (Plus a few other plants that like to eat animals)

Ok, this one isn’t particularly terrifying, but it does have a sufficiently witchy common name – bladderwort. Plus, this little underwater plant is a carnivoure, and traps tiny aquatic species in its bladder using a sophisticated vacuming mechanism.

Scary Score: 1 out of 5. Because I am not a tiny water animal.

Honourable mention: Carnivorous plants. Carnivoroy has evolved nine times across various plant genera. We want to give a big shout out to the pitfall, flypaper, snap, bladder, lobster pot and other traps that have allowed these amazing plants to supplement their diets with a little bit of meat!

Also called devil’s helmet, queen of poisons, as well as being the ‘bane’ of women, mice and leopards. The 250 or so species belonging to this genus make the deadly alkalkoid pseudaconitine, which has been used by a wide variety of cultures to coat spears and arrows for both hunting and warfare. Aconitine has turned up in ancient japanese comedy, was used by Medea to try to poison Theseus, featured in Shakespere, NCIS, Dexter, American Horror Story and more. The symptoms of the poisoning are similar to rabies – frothy saliva, impaired vision and vertigo followed by a coma – leading to the story that the herb originates from Cerberus, the three headed guard-dog to Hades.

Scary Score: 4 out of 5. Bonus points for being used by the greatest Goddess of all – Athena – to turn Arachne into a spider.

We hoped you enjoyed our list. Did we miss any, or do you think we gave some of the species the wrong Scary Score? Let us know in the comments!

Disclaimer – more than usual comes from wikipeda and other unreliable sources.

Big thanks to CL – who works with a lot of poisonous Solanaceae species – for her help in ideas for this article.

2 thoughts on “Our 11 Scariest Plants”