P-bodies prepare plants for growth in the light 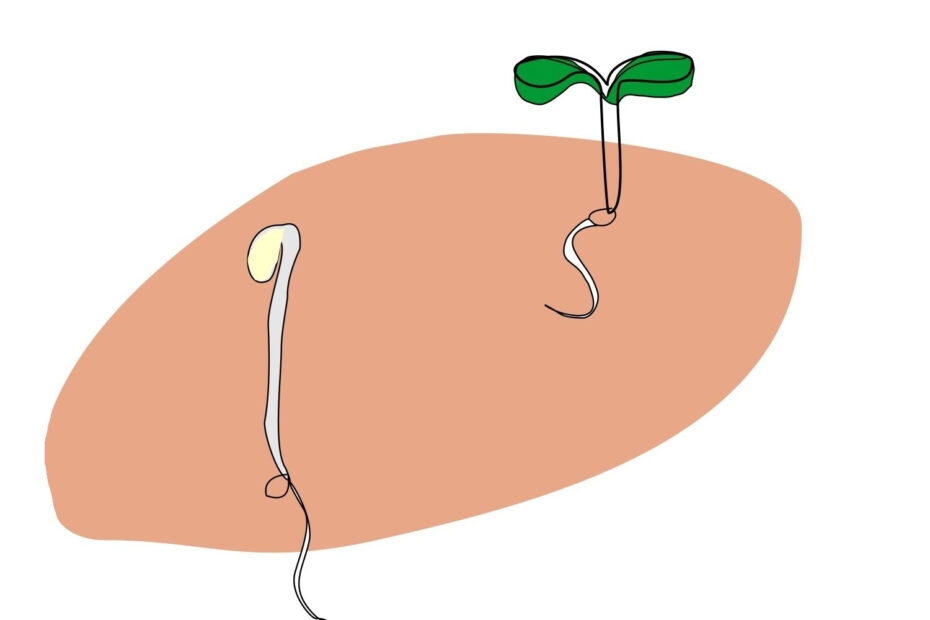 As anyone living in a poorly lit apartment (or country- heyo Germany!) will tell you, plants are pretty fond of light. Nonetheless, for many plants, life begins in darkness. Seeds often germinate under several centimetres of soil, so seedlings spend the first moments of their existence struggling to escape the black. Once they do, the success of finally meeting the light comes with its own challenge: a need for the plantling to discard the tools it used to emerge from seed and soil, and swiftly develop a skill for sunbathing.

This is a story of how plants switch from their days of darkness, into a life in the light, and how they rapidly accumulate the huge amounts of proteins required to make this change.

Desperate to find their sunny source of power, dark germinating seedlings must first focus on rapidly reaching the soil’s surface. So they use the energy that their parents gifted to them in seed or fruit (starch, oil and sugars) to journey upwards. Dark grown seedling create extremely long stalk-like structures (hypocotyls), that help hurtle themselves towards the sun. They keep their young leaves, known as cotyledons, folded and angled downwards: all the better to thrust through the soil. And deep inside these cotyledons, they prepare their cells, and their soon-to-be-chloroplasts, for the moment when they break through.

Because then, everything has to change.

As soon as the lights come on, the plant must flip its focus. Now, everything is about sunlight on using that light for good (photosynthesis). The vertical growth is slowed, and the cotyledons are opened. These cotyledons quickly turn green, as the chloroplasts within the leaf cells accumulate chlorophyll, and develop the structures and machinery necessary for photosynthesis.

So how do plants rapidly make thousands of proteins?

Well you probably remember the central dogma. DNA encodes genes. These genes are transcribed- copied into RNA messages. And these messenger RNA (mRNA) act as a template to be translated into proteins. So to get more proteins, it stands to reason that first you make more RNA, and then use it to get more proteins.

But this often isn’t the case.

Scientist found that during the switch from skotomorphogenesis to photomorphogenesis (and under many other conditions), the levels of many mRNA weren’t changing at all, even though their protein counterparts were increasing massively. Instead, when the lights came on, plants were just loading the existing mRNA for certain genes with a whole lot more ‘translators’- the ribosomes responsible for reading the mRNA and subsequently making proteins. What wasn’t clear, was how the plants knew when to send more ribosomes to a certain mRNA, and when to leave it alone.

The answer, it seems, is P-bodies.

P-bodies, or processing bodies, are locally concentrated spots within the cytoplasm containing mRNA and a bunch of proteins. They have been been found in various organisms, ranging from yeast, to humans, and can appear or disappear in response to cues like developmental age or certain stresses. Given that many mRNA seem to be shipped into these P-bodies, the structures have long been considered to be a site for processing mRNA for later degradation.

But more recently, it’s been suggested that they might be involved in keeping mRNA away from their translating ribosomes and thus holding them in a temporary state of silence.

Recent works by Jang and colleagues, demonstrated that this may indeed be the case. And that keeping certain mRNA quiet in the dark, and then releasing them for translation in the light, helps plants make the rapid switch from skotomorphogenesis to photomorphogenesis.

They linked a protein involved in P-body formation to a fluorescent protein, allowing the P-bodies to be visualised by microscope. P-bodies could be seen in large amounts in the cotyledons of dark-grown plants, but were much less abundant, and smaller, once those same plants saw light.

In order to understand the function of the P-bodies, Jang and colleagues created a mutant lacking a vital protein required to make the structures. Consistent with the hypothesis that P-bodies keeps mRNA out of the reach of translating ribosomes, the mutant that lacked P-bodies dcp5-1 had a higher level of translation of its mRNA than the P-body containing wild-type.

But this higher translation didn’t apply to all mRNA. Instead, only certain mRNA were more likely to be translated when P-bodies were lacking, suggesting that there is some sort of selection for which mRNA are usually hidden away in these structures. In darkness, these translationally ‘quiet’ mRNA included a whole lot involved in things like chlorophyll biosynthesis, photosynthesis, and opening of the cotyledons.

The scientists found that if these mRNA were not silenced in darkness, the plants could suffer. The P-body lacking dcp5-1 mutant struggled to emerge from earth, due to premature opening of its cotyledons. And once it reached the light, it was more likely to become damaged by the sun, a consequence of having the wrong levels of certain proteins involved in chlorophyll biosynthesis.

Together, the data suggest that P-bodies help keep certain mRNA- primarily those involved in photosynthesis and photomorphogenic growth- quiet in the darkness. When the lights come on, the P-bodies rapidly disappear, allowing rapid accumulation of certain proteins. This process likely allows the plants to make proteins more rapidly than if they first had to synthesise new mRNA, and gives the plants an extra level of control in adapting to the sunbathing lifestyle!

Sorry for the change in image quality. Joram is taking an week off, but will be back soon! And I am computer-incompetent.