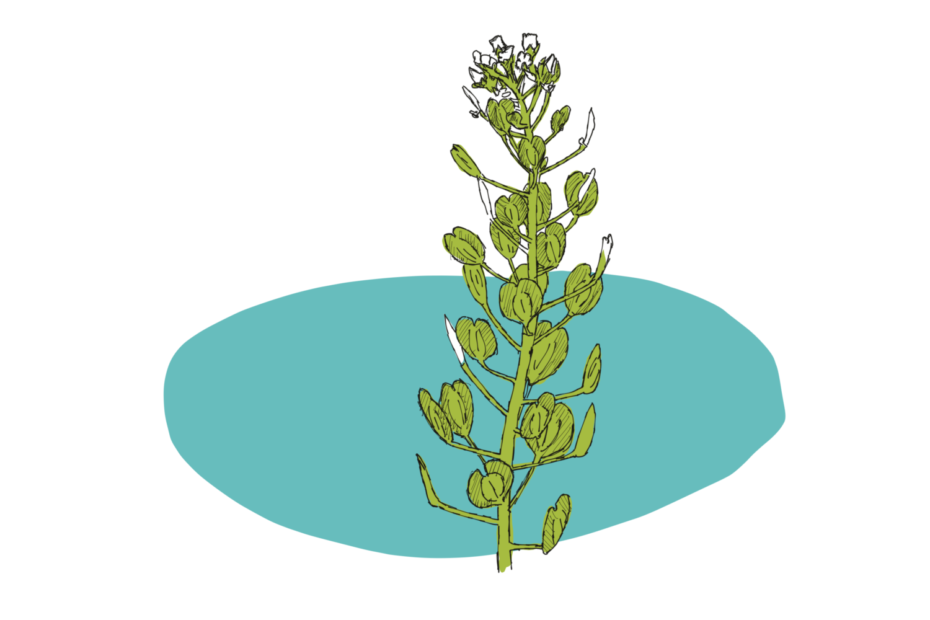 Before last week, I had never heard of pennycress. It’s a relative of our beloved Arabidopsis, that up until now has been firmly relegated to the category of ‘weed’. But its oily seeds, its ability to withstand extreme cold, and the possible ease at which it can be genetically manipulated, just might make it a promising crop plant for the future of food security.

Before we talk about pennycress a.k.a Thlapsi arvense, we first have to discuss Arabidopsis’ other, much more famous, cousin: Brassica napus. Also known as rapeseed, or canola. As in, the plant grown across the world in millions of golden fields, whose harvest is then channelled into millions of tonnes of golden oil for human consumption.

Many plants have oily seeds – think sunflower (Helianthus sp.), oil palm (Elaeis guineensis), avocado (Persea americana) and olive (Olea europaea). The oils, a.k.a triacylglycerols, act as energy stocks for the growing seedlings, and can also be a sneaky bribe for possible seed dispersers (birds and small mammals). Of course, we humans are also all about consuming oil. We consume plant-based triacylglycerols as food sources, as well as using them for cosmetics, industrial lubricants, to form soaps and detergents, and for biodiesel fuel. In short, we can’t get enough of plant oils. Which is part of the problem. Growing human population means growing needs, but we’re quickly running out of land that’s suitable to grow crops.

But what if, instead of looking for more space, we look for more time?

Thlapsi arvense, known commonly as pennycress, stinkweed or fanweed, is an oilseed species that can survive under temperatures as low as -25 °C. This means it could be planted in temperate regions (think the upper midwest of the US) after the autumn corn harvest, and still survive the winter. Plus, pennycress’ short life span means its seeds could be collected before it’s time to get the soybeans in the ground for spring. (Although technically edible itself, pennycress is said to have a fairly distinctively bitter taste, so it’s mostly those oily seeds we’re interested in here). Thus, pennycress could grow in winter, when the ground is normally lying fallow. Not only could selling the oilseeds be financially beneficial, but winter pennycress fields might also help prevent nutrient leaching and soil erosion, and out-compete (other) pesky weeds.

That’s a part of the good – it’s ability to grow at times of the year when other crops can’t. Also of benefit is that a pennycress draft genome has been published (Dorn et al., 2015). And the comparison between it and the genome of pennycress-cousin Arabidopsis suggests that the two species might be similar enough to allow us to transfer (huge amounts of) knowledge. In some cases, the pennycress genome looks even simpler than that of Arabidopsis: some genes that are duplicated in Arabidopsis – a feature that can complicate studies – are found only in single copies in pennycress. And when it comes to scientific study, pennycress grows rapidly, but produces more tissue than Arabidopsis, which may facilitate rapid biochemical research of the species.

But of course, not everything about the species is good. There’s also a bit of bad.

Pennycress is very much still a weed, and very much a wildling. It doesn’t germinate evenly, the plants lodge (they get a case of the flops and fall over), the quality of the oilseeds is suboptimal, and seed shatter – in which the seed pod opens before harvest, allowing the seeds to fall to the ground – can result in large harvest losses.

So the plant needs to be domesticated, a process that could hopefully be sped up by coupling Arabidopsis knowledge and laboratory techniques. A recent publication demonstrated successful mutagenesis of pennycress seeds, and selection of mutants with similar features to known Arabidopsis mutants (Chopra et al., 2018). They could also easily identify genes responsible for specific traits like the accumulation of undesired compounds in pennycress seeds.

So far, scientific progress is looking pretty promising. But it’s only been a few years since people have seriously started to think about pennycress domestication.

So we’re marking this one as a ‘one to watch’.

We first found out about pennycress from a features article in the Plant Journal:

We suggest this for further reading, it gives some background on pennycress and details on ways in which it can be domesticated:

(It’s not open access, but link via research gate here)

The draft genome is here:

The recent article describing seed mutagenesis of pennycress and linking mutant phenotypes to those of Arabidopsis: